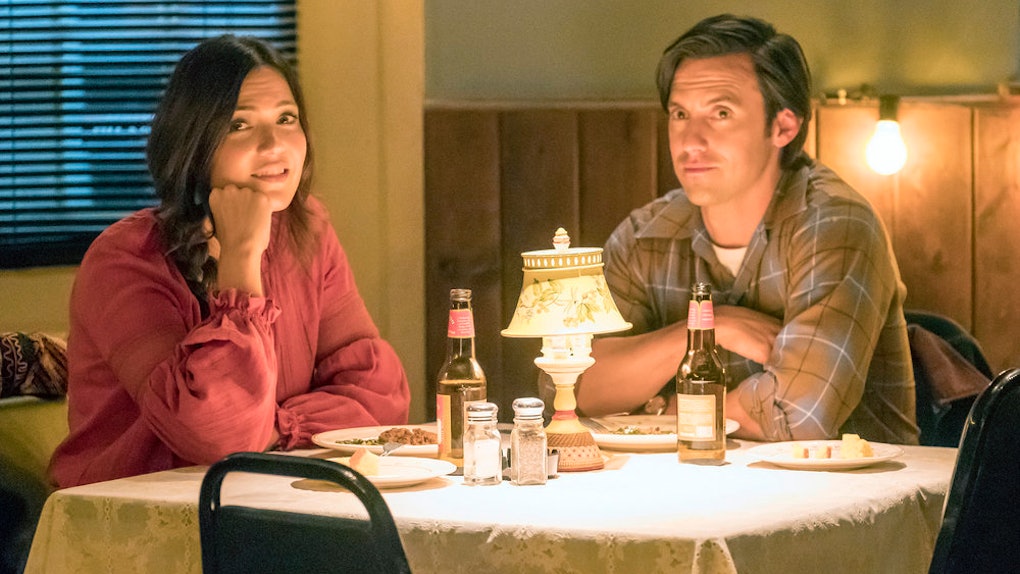 'This Is Us' Season 4 Will Start With A Young Jack & Rebecca, So Get Ready

Summer is still in full swing, but the casts of your favorite TV shows are already reporting for duty. Viewers still have more than two months until This Is Us returns, but photos of Mandy Moore and Milo Ventimiglia on set tease the point of the Pearsons' timeline when Season 4 will begin. Based on these pics, This Is Us Season 4 will start with a young Jack and Rebecca, so get ready for their longing looks and 1970s fashion.

Returning to NBC on Tuesday, Sept. 24, This Is Us is slated to introduce fresh starts for its characters in Season 4. While Kate (Chrissy Metz) and Toby (Chris Sullivan) brought their premature son Jack home in the Season 3 finale, Randall (Sterling K. Brown) and Beth (Susan Kelechi Watson) moved their family to Philadelphia for Randall's job and Beth's new pursuit of opening a dance studio. Rebecca (Mandy Moore) and Miguel (Jon Huertas) were also preparing for a move to Los Angeles to help Kate raise Jack, but L.A. gained one more Pearson when Kevin (Justin Hartley) returned there after breaking up with Zoe (Melanie Liburd).

The main talking point of the April 2 finale was the bittersweet flash-forward segment fueling questions about the family's somewhat distant future, but according to new behind-the-scenes photos, Season 4 will begin on a more optimistic note. After starting to fill in the gaps between Jack (Milo Ventimiglia) and Rebecca's (Mandy Moore) first meeting and marriage, Season 3 of This Is Us left big moments such as their engagement untouched. Season 4 may continue that specific storytelling right away, as Moore and creator Dan Fogelman shared photos of the Pearson parents as their younger personas.

Snapped on the first day of filming the new season, Fogelman's picture is taken from a camera's perspective of Jack and Rebecca in a car. With her long locks and chunky jewelry, Moore appears to be dressed in Rebecca's typical '70s attire, while Ventimiglia's clean-shaven face and slightly shaggy haircut match Jack's style seen before, during, and immediately after his service in the Vietnam War. Shots of the couple in the car together have already played a crucial role in their early relationship, as they shared their first kiss in Jack's car last season.

On Instagram, Moore posted a picture offering an even greater look at the characters as she and Ventimiglia posed on set with the first episode's clapperboard. While dressed in different clothing than in Fogelman's sneak peek, the pair still look unmistakably '70s, further confirming that the Season 4 premiere will involve flashbacks to Jack and Rebecca's early days together.

Moore previously shared what will happen to Jack and Rebecca in upcoming episodes, telling TVLine, "This season ... we're gonna kind of follow them back from that road trip in California to back to Pittsburgh and really see how they become a couple. I'm curious to see, like ... how does he really open himself up, how do they get engaged?"

The Season 3 episode "Sometimes" detailed Jack and Rebecca's spontaneous trip to Los Angeles soon after they met, leading to Rebecca's realization of Jack's post-war trauma and her rejection at a record label. The trip culminated with Rebecca singing one of her songs to Jack, who cried as he recalled Vietnam and his time with haunted brother Nicky (Michael Angarano). With this emotional bonding in mind, fans should likely anticipate another intense chapter of the Pearsons' relationship when Season 4 kicks off.