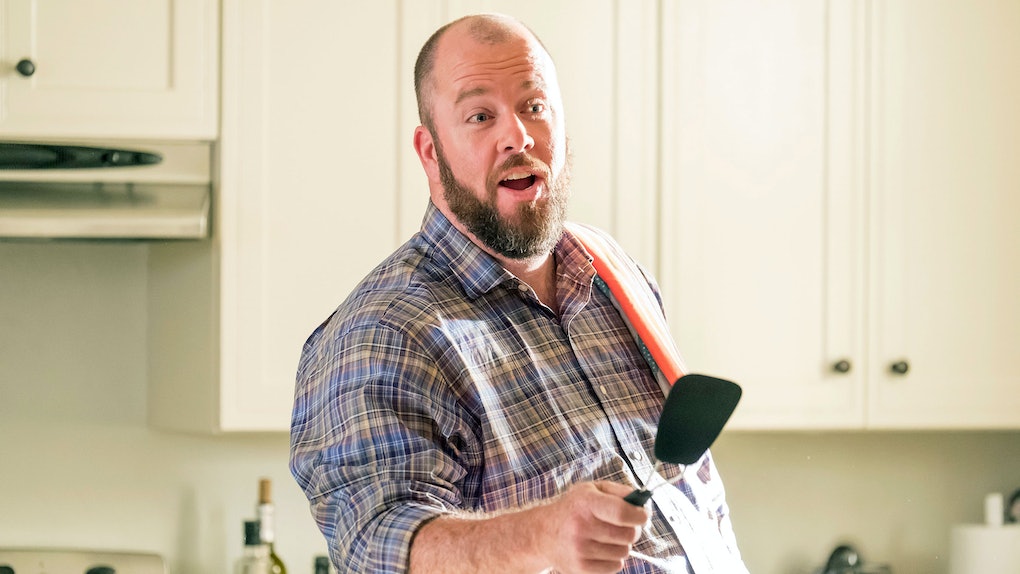 'This Is Us' Season 3 Will Explain Toby's Origin Story, According To This Instagram

Season 3 of This Is Us sounds like it'll be the year of origin stories. Mandy Moore has shared that the new season will explore Jack and Rebecca's early days as a couple, and we know that it will also cover Jack's experience as a soldier in Vietnam. While we've had plenty of flashbacks about the Big Three, their partners' pasts are generally mysteries, but that ought to change this year. According to a post on the show's official Instagram account, This Is Us Season 3 will explain Toby's origin story, and it's about time.

Posted earlier this week on the official This Is Us page, the photo alluding to a spotlight on Toby Damon is about as simple as it gets. The shot shows an index card pinned to a board with "Toby origin story" written across, while the photo's caption reads, "Oh, we are going there!". The picture originally came from actor Chris Sullivan's Instagram, where Sullivan said that the card was on display in the This Is Us writers' room.

Seeing as the show's Season 2 finale hinted at Toby's depression returning in full swing soon after his marriage to Kate, more details about Toby's first marriage and how his initial bout of depression emerged will definitely help fans understand his current (or are they far in the future?) troubles.

Season 2 also brought up Toby's difficult relationship with his much younger brother, but other than the brother not attending Toby and Kate's wedding, viewers didn't receive much insight into why the brothers struggle in getting along as adults. Maybe the origin story would also divulge the dirt about Toby's brother, because it just isn't This Is Us without some brotherly drama. If the writers toss in more clarification about Jack's surprise brother and Kevin and Randall's relationship following Jack's death, you could just relabel Season 3 as "Brotherhood."

Toby isn't the only member of the extended Pearson clan receiving a bigger storyline in Season 3. At Comic-Con, Jon Huertas revealed in an interview with TVLine that a Miguel-centric story would air either in the third season or the still-unconfirmed Season 4. He admitted that any sympathetic tones toward Miguel have to be handled carefully, since no one is ever really going to get over Jack and Rebecca's untimely end as a couple. Huertas told TVLine:

You can’t push Miguel down people’s throats right now, because Jack and Rebecca, it’s everyone’s dream to be in a relationship like that where both people are so dedicated to each other, no matter what. You have to go really slow and really watch your step. I feel like you’re walking through a minefield.

This Is Us creator Dan Fogelman also confirmed in May that Season 3 would explore Beth's backstory, particularly her teenage years. Does this mean we'll finally see stoner Beth and nerdy Randall meet in college? It's only right for the early days of Jack and Rebecca 2.0 to get just as much attention as that of their beloved predecessors.

We still don't know much about the present-day storyline of Season 3, but it's exciting that the deeper past of some underappreciated characters, aka the alternative Big Three, will be revealed.