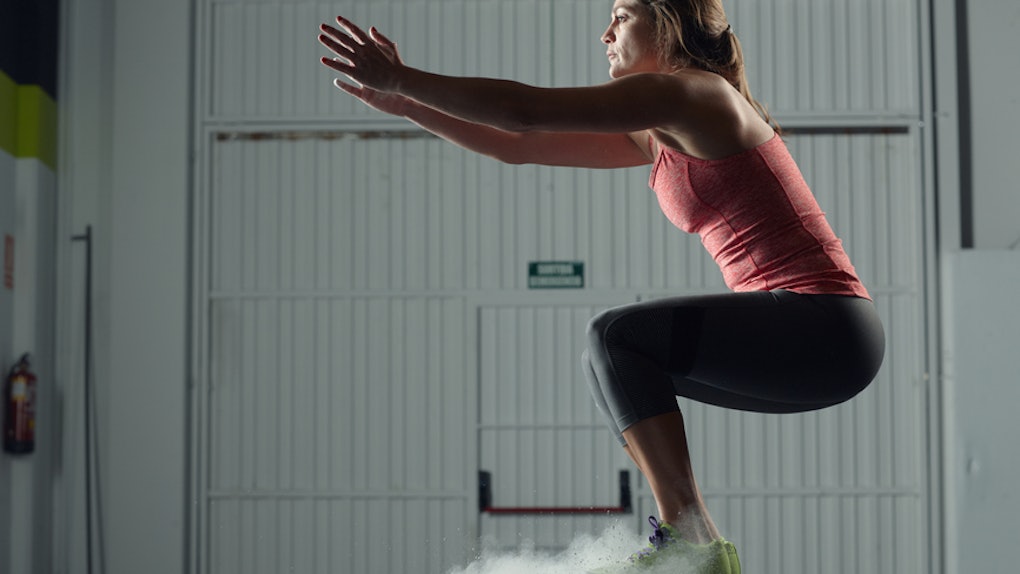 People on the internet often make things look a lot easier than they actually are. I can't tell you the amount of times I've attempted a wild, contortionist "yoga pose," only to fall on my face seconds later (but they made it look so simple!). So, when I heard about the "invisible box" challenge, I was intrigued AF, but also knew that I should most definitely proceed with caution.

From the painful and pointless cinnamon challenge, to the charitable ALS ice bucket challenge, to the ridiculous Kylie Jenner lip challenge, the internet truly reveals the wackiest, coolest, and strangest things when it comes to testing people's limits. And the most recent "invisible box" challenge, which seems to be nothing short of awesome, is here to make your glutes and your core work harder than they have in years.

The viral challenge began when Ariel Olivar, a cheerleader at Manvel High School in Texas, posted a video on her Twitter feed that showed her stepping on top of a nonexistent box during one of the school's football games. TBH, it seems pretty damn easy when you casually say it like that, but trust me, this fitness challenge is anything but.

Now, people everywhere are trying the difficult stunt for themselves, but none appear to be as successful as Olivar's OG performance.

The impressive optical illusion requires tons of agility and focus, and of course, an impressive amount of body strength.

But hey, at least it's getting people to actually get their bodies moving and work toward a totally awesome goal, right? I'd say that's way better than suctioning your lips to a shot glass in the hopes of achieving juicy Jenner lips.

Just because internet users are being uber ambitious in saying "challenge accepted," though, does not mean that they are coming anywhere close to Olivar's initial success.

The attempts are hysterical, cringeworthy, and clumsily relatable, to say the least.

So, as simple as it may seem, they're calling this a "challenge" for a reason, people. And, as if the original feat wasn't difficult enough, Olivar decided to post an even more trippy-looking, follow-up video. I honestly think anyone who attempted this version would promptly fall right on their ass.

The Texan cheerleader took the freaky optical illusion to the next level by adding another person to the equation, who kicked the "box" out from underneath her.

OK girls, we get it, you're all very strong and very awesome. Now teach me your ways.

On the real though, if you're wondering how the hell Olivar masters this mime-like stunt with such grace, she did give the world some tips on how to conquer the challenge.

Olivar went on Today and attempted to teach us all how to succeed in the invisible box challenge, but the hosts ultimately had to cheat to get even remotely close to her level of #skills.

Olivar said that the secret technique is to keep your bent leg completely still while you raise your other leg higher, and jump onto the "box." Honestly, my brain hurts just thinking about all that coordination, girl.

The super strong cheerleader doesn't really talk about engaging your abdominals, but I'd imagine those core muscles have to be seriously activated to keep one of your legs stationary while the other one is putting in major work, amirite?

However, there does lie a sorcerer in the midst of all the confusion and clumsiness.

Seriously, that guy is my idol. In the meantime, I'll be over here doing core circuits if you need me.

More like this
25 Instagram Captions For Workout Pics & Being A #Boss In The Studio
By Marisa Casciano
I Tried Singing While Running Like Miley Cyrus & OMG, My Lungs
By Rachel Varina
The Trendiest TikTok Recipes Of All Time That You'll Want To Taste With Your Buds
By Kelly Pau
Stay up to date