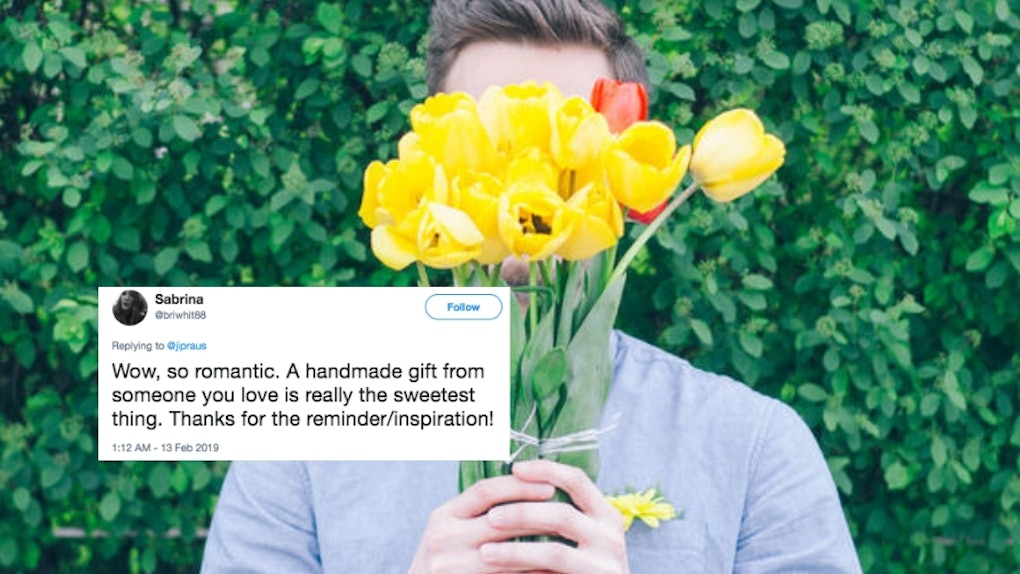 This Husband Built An Everlasting "Mechanical Tulip" For His Wife, So Twitter Is Swooning

One husband is putting us all to shame with his incredible talents for Valentine's Day. This guy decided to go above and beyond the typical dozen red roses by building his very own robot flower to give his wife. Talk about relationship goals. He took to Twitter to share his creation and people are applauding him for a job well done. Probably because the contraption has all the bells and whistles you can imagine. Not to mention, it's super thoughtful. This husband built an everlasting "mechanical tulip" for his wife and Twitter users are swooning over the gift.

Twitter user Jiří Praus began assembling the mechanical tulip back in early February, according to his Twitter timeline. He started by sharing some of the parts he used to construct the flower and documented the entire process. Over the course of the next two weeks, he successfully connected wires to other wires and somehow magically put together a mechanical tulip that changes colors. All in an effort to make the most thoughtful Valentine's Day gift for his wife. You win, Jiří Praus. Best. Gift. Ever.

I just want to point out that this isn't some cheap looking gift, either. Based on the photos he shared of the flower, it looks like very high quality. Like something you might find at West Elm or in the home decor section of Urban Outfitters.

So, why a tulip and not a rose? I'm just guessing here, but I think that roses are pretty overdone. I'm not super picky about my flowers, but there's something about tulips that are just so fun and cheery. The colorful blossoms represent "perfect love" and "deep love," according to FTD.com. Unlike *real* flowers, this mechanical tulip won't wilt over time, represents everlasting and eternal love, and "will never fade," per a tweet from Praus. Ugh, this present seriously has the sweetest meaning ever. Twitter users seem to agree that this hand-built mechanical flower wins for best gift this Valentine's Day.

Praus, whose Twitter account states that he lives in the Czech Republic, finished building the mechanical flower on Tuesday, Feb. 12, Just in time for Valentine's Day on Thursday, Feb. 14. It doesn't appear that he's given the gift to his wife just yet. Hopefully she's not on Twitter, or else the surprise might already be ruined. Either way, I'm dying to know how she reacted (or is going to react) to this spectacular and uber romantic gift. Aside from getting a handwritten love note, I think a handmade mechanical tulip is the next best gift. It's really something extra.

My husband and I are coming up on 14 years together. (I'm not that old, really.) We met in our high school journalism class and the rest is history. Thursday will mark 15 Valentine's Days spent together, but I'm not expecting anything as elaborate as this. Over the years, I've come to learn that my husband is not the handiest guy. My hubby has lots of wonderful qualities, but engineering a mechanical tulip is not one of them. Frankly, I'm not great with these kinds of projects either and that's OK. Instead of exchanging gifts, we'll be curled up on the couch, eating pizza, and catching up on This Is Us to celebrate Valentine's Day.

I'm still going to be swooning with the rest of Twitter over Praus' mechanical tulip for the very near future. It's total perfection. Way to set the bar high.