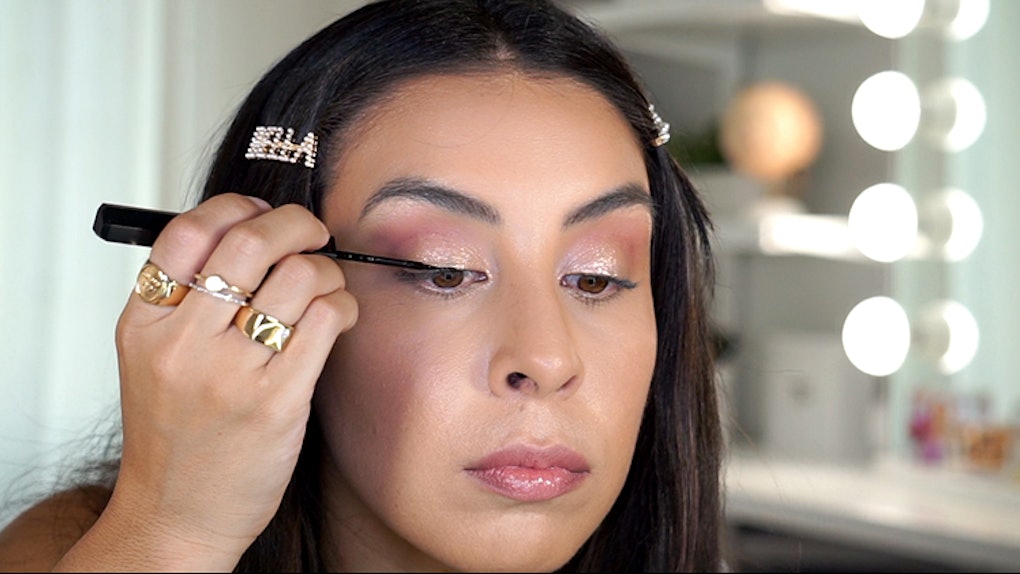 With my beauty look, I work hard on my cat eye, so there's nothing that upsets me more than seeing my hard work go to waste just hours later when the liner inevitable fades, smudges, or straight up disappears. I've tried at least a hundred eyeliners in my quest for a wing that lasts, and few of them boast a 48-hour claim. But the newest one on the market is confident it'll make it through a full two days. So, I decided I had to do my own Huda Beauty Life Liner review and see if it holds up. And what better way to put it to the test than to wear it for two days straight as I make my way to the gym, through long days of work, while running errands, and, of course, sleeping. Here's how it held up.

This is when I appied the Huda Beauty Life Liner ($25, shophudabeauty.com) for the first time. Off the bat, I noticed it's a thicker formula than most liners. In the tube, it feels as thick as honey, but not as sticky. The brush is also more dense, which made it a bit more challenging to work with, at least for me. After much concentration and anxiously trying to keep a steady hand, I was able to get a crisp wing. However, for the cat-eye novice, it might be a bit more difficult to work with. Also, because it's so pigmented (it will leave a mark with even the slightest contact), there's no room for error.

At this point, I'd lost most of my makeup to sweat and an oily T-zone. But an evening on the couch catching up on the new season of 13 Reasons Why added some tears to the mix, too. On my couch, I ugly cried in my Huda Beauty Life Liner, but even arguably the most emotional scene in three whole seasons of the show was no match for this eyeliner. Color me impressed.

I was almost nine hours into my 48-hour experiment and I was ready for bed. I washed my face and removed as much of my makeup as possible without disrupting my liner. To my surprise, my cat eye was just as dark and crisp as when I put it on for the first time.

The next morning I woke up and ran straight to the closest mirror to inspect the damage. Surprisingly, the liner hasn't moved or smudged at all. I had a bit of a raccoon eye, but that was just from my mascara from the day before that I couldn't remove, as well as some of the eyeshadow residue that was left on my lids which had fallen onto my cat eye and made it look a bit faded. However, the liner itself held up to my beauty sleep.

By noon, I finished my workout. After an hour on the treadmill, I had just started to see a bit of smudging on the wing, but nothing serious. So far, it had been a little over 23 hours since I first applied the eyeliner, and even then, it still held up pretty well to my cardio sesh.

After a full day of work, a workout, two meals, and a Starbucks run, I took a shower. I tried my best not to wet my face, but between shampooing, conditioning, and hair masking, it was impossible to keep water off my liner entirely. When I got out of the shower and toweled off, this was the first real sign of slight smudging and fading on my liner. It wasn't as crisp or dark as it was the day prior, but it was still holding up quite well.

I had officially passed the 48-hour mark. 50 hours and 12 minutes after I first applied my Huda Beauty Life Liner, my cat eye was honestly still going strong. It's slightly faded and smudged in a few spots, but there was no cracking, I didn't get raccoon eyes, and it's still super visible and clean-looking from far away. If I hadn't told you, you might have thought I applied my eyeliner fresh at this point. All in all, I think Huda Beauty might've sold themselves a bit short with their two-day claim.

If you're looking for a liner that will actually stand up to all your day's work, Huda Beauty's Life Liner is available for purchase now and retails for $25 — a small price to pay for some serious longevity.

More like this
This ONE/SIZE Turn Up The Base Foundation Powder Review Is A Must-Read
By Theresa Massony
How To Get A Trendmood Box, AKA The Next Big Thing In Beauty Box Subscriptions
By Bella Gerard and Theresa Massony
These Asian-Owned Beauty Brands Are Creating The Products You'll Use Forever
By Margaret Blatz
Stay up to date