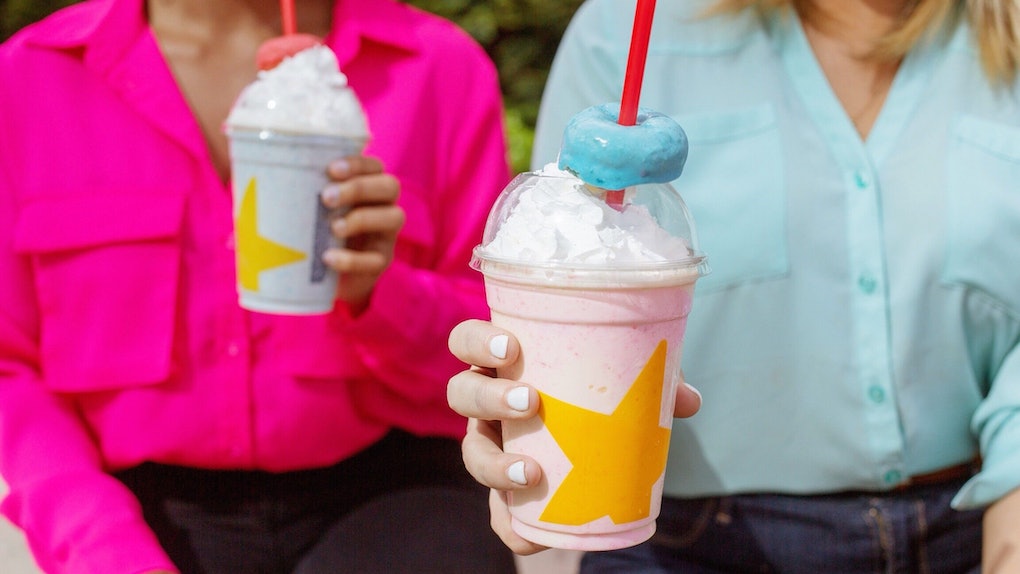 As much as I loved growing up during the golden age of cereal, aka the '90s, I've got to admit that today's kids have it good when it comes to mash-ups that transform your favorite morning eats into the magical, sugar coma-inducing desserts of your dreams. Case in point: this Hardee’s Froot Loops Mini Donut Milkshake test item. It has the dessert game handled with three of your favorite goodies all in one, and you can get one at select Hardee's locations starting on Wednesday, May 15. TBH, I'll happily embrace the inevitable sugar coma for a sip of this sweet, sweet goodness.

Let's be real: Everything is improved in milkshake form, and Hardee's is successfully taking this theory for a spin by rolling out a Froot Loops Mini Donut Milkshake in the testing stages on Wednesday, May 15. The confection is exactly what it sounds like, and if you grew up starting your mornings with bowls of this fruit-flavored cereal, you're going to need this addition in your life. According to press materials, the mash-up is touted as the "perfect summer treat," which is totally fair because it manages to blend three of my favorite things into one crave-worthy, cohesive dessert.

If this all sounds a little too good to be true, there are a few things to keep in mind before you clear your schedule for the rest of the day and head to your nearest Hardee's. While the new milkshake is launching on Wednesday, May 15, it's still in testing stages — meaning that it will only be at select Hardee's storefronts "while supplies last."

A Hardee's rep confirms to Elite Daily via email:

There is no list of participating locations. The product is being tested in key Hardee’s regions like Nashville, with plans to expand in the future based on the consumers’ response.

In other words, I'd probably call ahead or tweet your local Hardee's to make sure they have the shake before you head over.

On the bright side of things, Hardee's is sweetening the milkshake testing phases by also selling its Froot Loops Mini Donuts for just $1 with any purchase also beginning on May 15. Considering that the multi-colored treats generally cost $1.99, you're saving about 50% off on your purchase. One thing's for certain: Whether you choose to crown your Froot Loops Mini Donut Milkshake with an extra colorful donut (or three, because there's no such thing as too many donuts) or you order a dozen of the sweet pastries solo, your tastebuds will thank you.

Again, I'd call ahead to make sure your local Hardee's location is serving up these sweet test items before going over, but the fact that the shakes are only available "while supplies last" means I wouldn't waste any time finding that information out. Trust me, you don't want to sleep on this sweet combination, and here's hoping it becomes a part of Hardee's permanent menu sooner rather than later.