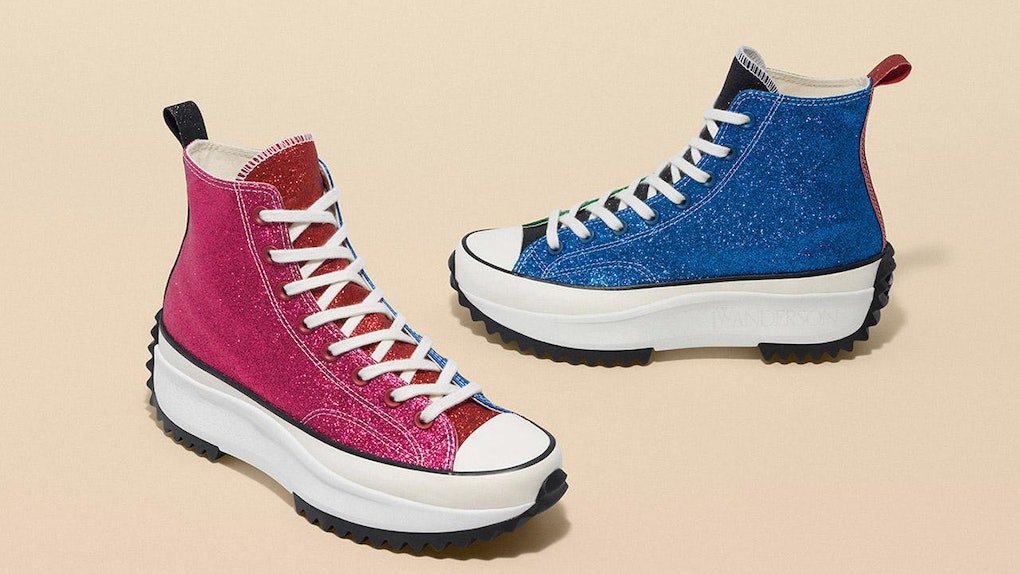 If you've got a weakness for all things sparkly and a penchant for rad sneakers, then the glittery JW Anderson x Converse collaboration is about to blow your mind. It's hands down one of the most unique footwear releases of 2019 thanks to its rainbow color palette and extreme shine factor, and signals continued brilliance (literally) from the epic design partnership. The two brands have been releasing sneaker packs together for two years and making high brow fashion more accessible to all along the way, and this one is arguably one of their best drops yet.

JW Anderson's first reimagining of Converse sneakers included a glittery version of the classic All Star sneaker that looks like the prototype for a few of the styles in this new upcoming drop. A three-tone color palette and toe-to-heel glitter made it a shoe to remember, and it looks as if Anderson wanted to do just that by referencing it within this new release. Before you take a look at the five-style pack (it includes new takes on both the Chuck 70 and the Run Star Hike), I should warn you that a few of the designs do boast some slightly clown-like vibes, albeit highly elevated ones. If thoughts of the circus make your skin erupt into goosebumps, this might not be the drop for you.

First up is the Run Star Hike, the design of which was created in collaboration with JW Anderson but was initially released in decidedly more straightforward and classic colors. Featuring a platform sole complete with chunky contrasting treads, it's basically the Chuck in punk form and is right on trend in light of fashion's recent obsession with hiking boots. It arrives here in a rainbow color palette, with each shoe in the pair featuring three color panels. One boasts a blue and pink upper with a red tongue, while the other boasts a green and blue upper with a black tongue. Both shoes boast all-over glitter along with white toe caps and laces for a fresh contrast.

The Chuck 70 arrives in four color ways, all of which also feature a tri-panel design. Unlike the Run Star Hikes, both shoes in each pair match one another. The first comes in a blue, red, and yellow color palette, with fuzzy light blue laces adding a kitschy playfulness. They're the same textured laces that were used in the JW Anderson x Converse "Toy" collection, which proves these new releases are steeped even more in nostalgia than we thought.

The next color way gives me trippy Christmas vibes thanks to its silver and gold uppers that remind me of tinsel, as well as its fuzzy evergreen laces. A highlighter yellow tongue adds a psychedelic feel and makes the style feel random and almost sartorially nonsensical.

The third palette features a multi-color glitter that's heavily green, silver, and black, with royal blue laces finishing them off.

Finally, the fourth style brings some much needed lightness to the drop, featuring a tangerine tongue and multi-color upper in both pink and confetti tints. Yellow laces feel very apropos on the sunny style.

Both styles will be available to shop starting May 9 at converse.com and JW Anderson’s web store.