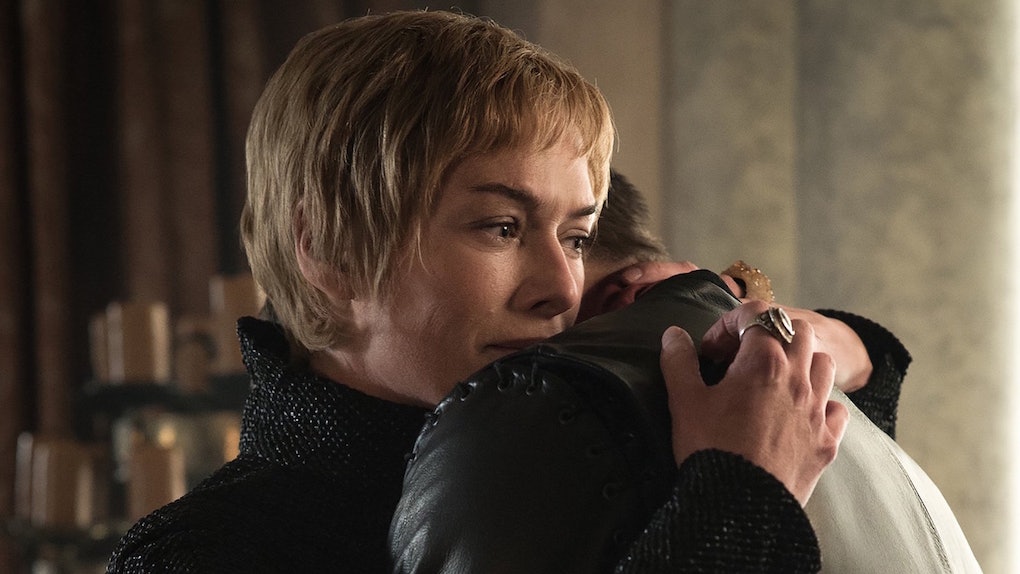 The final season of Game of Thrones really could have gone anywhere, which is a big reason why so many people tuned in to see what was going to happen in Westeros. But one particular storyline that never really got fulfilled was that of Cersei's pregnancy. It was a major plot point in Season 7 that Cersei had gotten pregnant by her brother Jaime, but the pregnancy turned out to not really affect anything in Season 8. It could have, though. Lena Headey revealed a Game of Thrones deleted scene about Cersei's pregnancy was filmed that revealed the truth, and it would have made Cersei's character much more intriguing in the final season.

Before we got to the deleted scene, here is a refresher on Cersei's mysterious pregnancy. In Season 7, Cersei revealed to her brother/lover Jaime that she was pregnant with his child. This was a big deal for multiple reasons: politically, it meant that Cersei could rule as queen and have a Lannister heir to pass the throne on to since all of her other children had died, and emotionally, it was a huge milestone for Cersei and Jaime's relationship since the two decided they would publicly reveal the child was theirs, incest be damned. But that all got messed up when Cersei revealed her plan to betray Daenerys Targaryen and Jon Snow, driving Jaime away to do the right thing rather than be part of his sister's betrayal.

There was always a question about whether Cersei's pregnancy was real or just a ploy she created to help keep her in power, and that question grew even more in Season 8. With Jaime gone, Cersei used her pregnancy to draw her greatest political ally, Euron Greyjoy, even closer to her, telling him that he had gotten her pregnant. But fans never found out the truth about the pregnancy, as Cersei died in Daenerys' attack on King's Landing without ever revealing whether she was really pregnant or not.

Thankfully, though, now we have an actual answer to that question. During a panel at Munich Comic Con, Lena Headey confirmed that she did film a scene in which the truth about Cersei's pregnancy is revealed. Headey said that a scene cut from Season 7 showed Cersei having a miscarriage, meaning that she was not lying about getting pregnant by Jaime, but then lost the baby likely around the time she also lost Jaime at the end of the season.

... A scene that never made it into Season 7, which was when I lose the baby. And it was a really traumatic, great moment for Cersei and it never made it in, and I loved doing that because I thought it would have served her differently.

Knowing that this scene once existed also gives fans a better idea of what Cersei was going through in the final season. Having just experienced a miscarriage really helps to better explain Cersei's refusal to budge when Tyrion pleads with her to think of her unborn child while trying to get her to avoid a war with Daenerys, and the depression resulting from that loss could also explain her questionable decision to sleep with Euron.

But unfortunately, that scene never aired, so viewers were just left to speculate about Cersei's pregnancy. At least now the fans know the truth, and can see even more depth in Cersei's decisions upon rewatching the end of Season 7 and all of Season 8.

More like this
'Ted Lasso' Season 2: Apple TV+ Release Date, Trailer, Cast, & More
By Ani Bundel
Will ‘The Falcon And The Winter Soldier’ Get A Season 2? This Could Be A Hint
By Ani Bundel
Is 'Cruel Summer' Based On A True Story? Here's What To Know
By Rachel Varina
Stay up to date