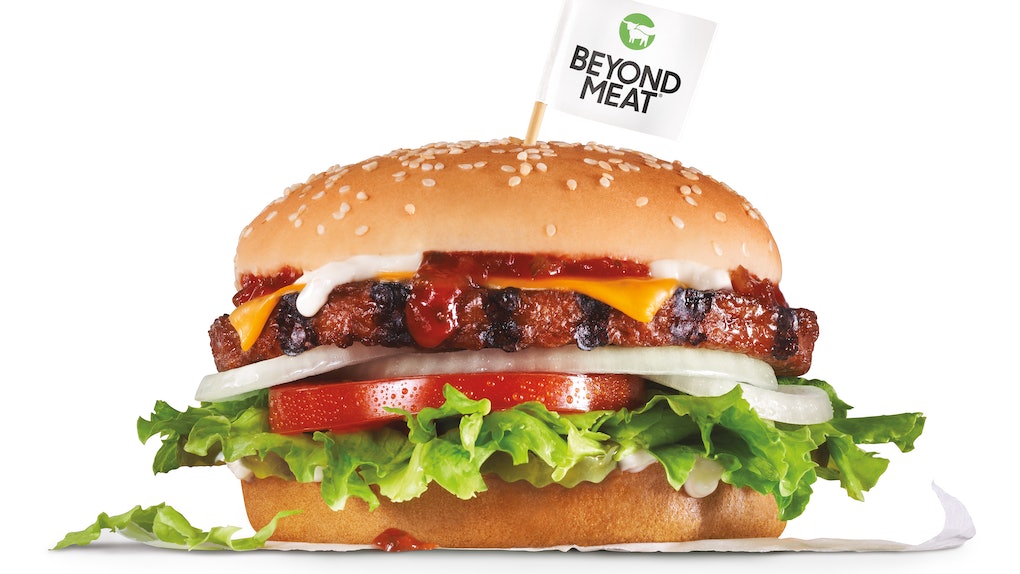 This Free Beyond Famous Star Deal At Carl's Jr. On Aug. 15 Has Me Salivating

Attention, all of my fellow plant-based pals and meatless Monday participants: Carl's Jr. was one of the first fast-food chains to include a meatless version of their staple sandwich back in December 2018, and for a limited time this week, you'll be able to get one for yourself totally on the house. For real, though — this free Beyond Famous Star deal at Carl's Jr. on Aug. 15 is about to come in clutch. It basically goes without saying I'll be getting one for myself as soon as I possibly can.

You heard it first here, y'all. On Thursday, Aug. 15, participating Carl's Jr. locations will be offering its plant-based creation — which is best known as the Beyond Famous Star burger — for free. According to the brand, all you have to do to get in on the offer is say, "Beyond Upgrade" at the register and you'll get one for free with the purchase of any large beverage. Like I said, though, it will only be available at participating locations while supplies last, so definitely check if your neighborhood location is offering the deal. Also, if you don't get there early, you might not get one at all. So I strongly suggest getting there on the earlier side, prior to the busy lunch hours.

If you haven't already tried a Beyond Famous Star burger for yourself, prepare for a delicious experience. According to the brand, it features the Beyond Burger patty, which is cooked over an open flame. That's topped with gooey American cheese, lettuce, tomato, sliced onions, dill pickles, what the brand calls "special sauce," and mayonnaise all nestled atop a seeded bun.

As I mentioned before, the meatless sandwich has been around for the last few months. According to the fast food burger chain, Carl’s Jr. and plant-based protein company Beyond Meat first started collaborating back in December 2018 to create the now-famous meatless sammie. In the last eight months, according to Carl's Jr., over 4.4 million Beyond Famous Star burgers have been sold at the chain. Clearly, it's been quite popular. I've been dying to try one.

You may have noticed that Beyond Meat has been all over the place lately, especially in the realm of fast food. Recently, for example, Connecticut-based sandwich chain Subway announced it would be testing a new meatless item known as the Beyond Meatball Marinara. It's set to hit select menus starting in September 2019 for a limited time, in almost 700 participating restaurants throughout the United States and Canada. It's going to feature the first-ever Beyond Meatball, which will be slathered in classic marinara sauce and melty Provolone cheese, before getting sprinkled in a handful of grated parmesan. Then, all of that will be sandwiched in a bed of toasted sub bread. Dang.

I don't know about you, but I'm always seeking out new plant-based options. I'm thrilled to hear that Carl's Jr.'s meatless option will be available for free this week. See ya later, beef — I hardly knew ya.