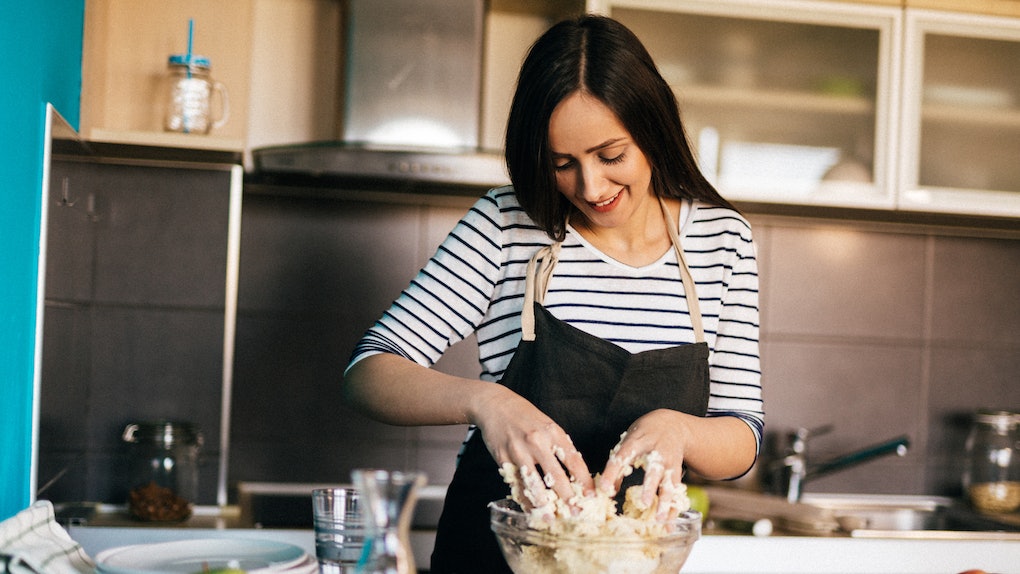 This Flour & Water "Chicken" Recipe On TikTok Is Raising Eyebrows

When it comes to making meat substitutes, some recipes can get pretty creative. But a recent viral fake chicken recipe might take the crown as one of the most inventive meat substitutes yet. This "chicken" recipe on TikTok combines flour and water to help make a vegan meat substitute called seitan. And much to everyone's shock, it actually tastes like meat.

As you'll see in the accompanying videos, TikTokers are combining flour and water to create bread. Then, they wash the bread to get rid of all the starch and season it with ingredients like vegetable stock, paprika, and garlic to give it a flavor reminiscent of roasted chicken. For the last step, they fry it on a pan to shred into chicken-like strips. If watching this dough transform from bread to pulled chicken weren't shocking enough, TikTokers are also putting their own tasty spin on this recipe. One TikToker, for instance, creates stir-fry chicken using the seitan recipe to start. Another turns this two-ingredient recipe into a vegan version of fried chicken.

As you watch these flour and water "chicken" recipes on TikTok, you'll definitely be inspired to try out the trend for yourself. These videos can offer you some inspo on how to chef up your own vegetarian chicken. Just think, when you recreate these recipe for your housemates, they'll wear priceless expressions of amazement when you reveal that your "chicken" dinner was actually flour and water.

1. Here Is The Classic "Chicken" Recipe

Let's start with the classic recipe by @futurelettuce. This TikToker's recipe kneads all-purpose flour and water together to make a dough, which then rests for an hour. What follows is the key to the entire technique: kneading the bread under water. After the dough has been washed enough, you can season with salt, pepper, garlic, and paprika to rest for another hour. Finally, knot your bread together and fry with vegetable stock. By the end, your dough will be a juicy, waiting to pull apart like chicken.

To truly dress up your fake chicken, turn your seitan into a stir-fry. This TikTok video uses the classic recipe, adding a nutritional yeast and garlic powder, and mixing the wheat "meat" into a favorite veggie medley.

3. This Recipe Calls For A Slow Cooker Or Instant Pot

For a slow-cooking "chicken" that's soaking in flavor, check out TikToker @thevietvegan and their seitan recipe. In this video, the bread mixture is cut into three strips and braided before it's stretched and pulled. To cook this fake chicken, place the mixture into a slow cooker or instant pot on the slow-cook setting in a broth of choice.

If you love Kentucky Fried Chicken but can't get your hands on it at the moment, then this wheat "meat" recipe can satisfy your cravings. TikTok @texykitchen1 uses the classic version, but rather than frying the dough as one large knot, this TikToker breaks the dough into smaller pieces to resemble drumsticks.

Your vegan chicken can be an overnight success as it is in this TikTok recipe. In this video, the mixture sits overnight to thicken rather than a few hours. The results? According to TikToker @povoprincess, it tastes just like chicken nuggets.

The next time you're in the mood for a sandwich, check out this flour and water "chicken" recipe. TikToker @christianmaminski uses a ton of spices including onion powder, garlic, cumin, oregano, and black pepper to make flavorful fake chicken patties.

More like this
The TikTok Recipe You Should Try, Based On Your Zodiac Sign
By Chelsea Jackson
The Baked Feta Pasta Dessert Recipe On TikTok Is A Sweet Upgrade To The OG
By Rachel Chapman
When Will Cricut's Mug Press Restock? You Don't Have To Wait Any Longer
By Rachel Chapman
Stay up to date