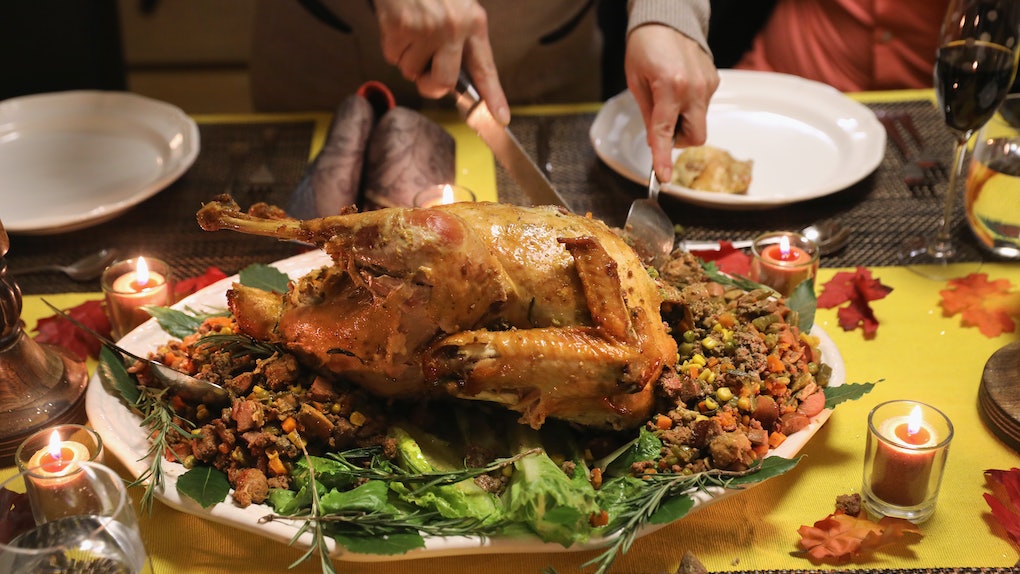 Thanksgiving is right around the corner, which means it's time to bring on the traditional feast of turkey drenched in gravy, sweet potatoes, and all the stuffing possible. If you're looking for a slightly... ermmm... less traditional menu this year, there's plenty of options out there too. Namely, a Flamin' Hot Cheetos turkey recipe exists, and the whole thing has me very, very torn.

So, as a precursor, I have to say that I like Cheetos as much as the next person. They're deeply satisfying to crunch on and highly, highly addictive. Probably the only con is how gross your fingers get afterwards but even that's manageable. A turkey covered with Cheetos, though? This definitely calls for a moment of pause.

The idea is courtesy of Reynolds Kitchen, and the recipe (which is winkingly called "Hot Turkey," but we all know it's a Cheeto turkey) is pretty much exactly what you'd expect it to be. Cheetos — I'm sorry, hot puffed cheese sticks, are ground up in a food processor or crushed with a rolling pin and then patted onto a greased up turkey. You then stick the whole concoction in an oven bag and get it cooking. It's really hard to picture this combination being at all good, but the pictures admittedly look very intriguing.

It's just so orange. And crumbly. And orange.

People seemed to be deeply divided about the whole concept on Twitter.

Some were very into the idea, and felt that the recipe answered all their Cheeto/turkey loving dreams.

Others didn't even want to HEAR about it.

One brave soul has already attempted the recipe and the results were... actually good? All three people in the video seemed pleasantly surprised by the taste.

Reynolds Kitchen also has a couple of other turkey upgrades, including a onion flavored turkey and a ranch flavored turkey. For the onion one, you put onion rings in a food processor and then sprinkle those crushed bits over the bird. The same goes for the ranch turkey, only this time you're using ranch-flavored corn chips.

You'll definitely get points for innovation if you try either of these recipes. And most people are usually too polite to tell you that they hate your cooking, so you don't have to worry about any negative feedback.

Now, if you're really feeling this whole unusual, envelope pushing Thanksgiving recipe thing and want to take it a step further, there's actually plenty of other super weird ideas that you can incorporate into your meal.

For instance, you can make a turkey CAKE. This idea is courtesy the the site Chowhound, and they offer the following precursor,

Whether this Thanksgiving centerpiece incites horror, amazement, or laughter when it’s served, it’s certain to evoke some kind of outburst. Warning: This dish is not recommended for people who require an inch of space between food groups. It’s a savory layer cake composed of an entire turkey dinner: ground turkey filling, mashed potato “icing,” with stuffing, sweet potatoes, cranberry sauce, and more.

Annnnnnd here is the result:

OK, I will eat cake until the ends of the earth, but something feels very wrong about the idea of a turkey taking on a dessert form. Why meddle with two excellent food groups? They're doing just fine.

You can also take your Thanksgiving leftovers and create a super inventive feast, like sushi rolls made out of all your half-finished food (yup, that's a thing!) and also an entire pizza.

While these all sound like very creative ideas, I will probably just take a tin of day old pumpkin pie and eat it in bed. I'm old fashioned like that.

Here's to having a hopefully warm, fun, and weird Thanksgiving. Awaiting any and all feedback on the Cheeto turkey. I hope it pulls through.