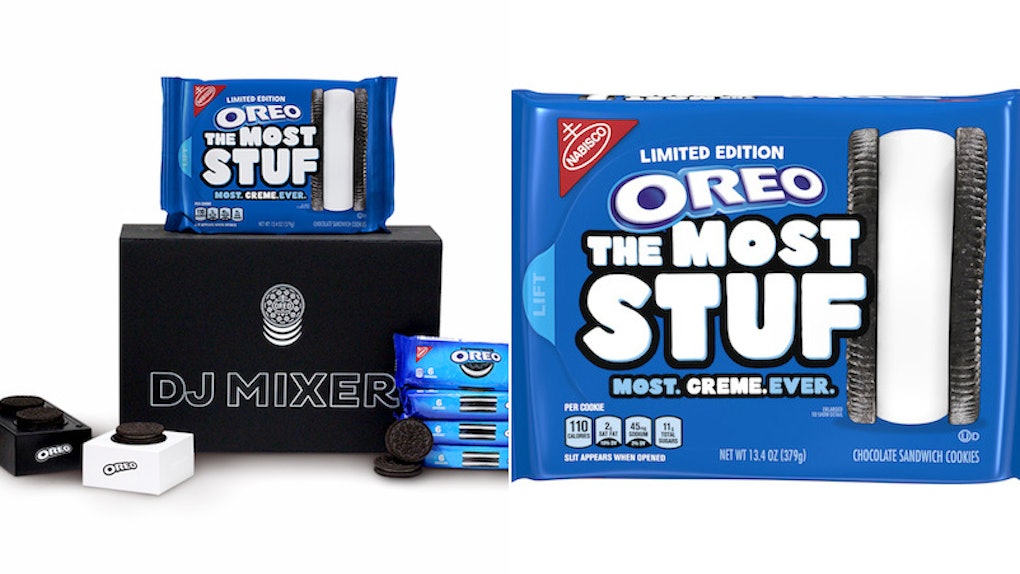 When you think about it, the two main ingredients to a good party are music and snacks. That's why the new DJ Mixer by Oreo with Most Stuf Oreos is so important. In case you didn't know, the brand new turntable makes it possible for Oreo snackers to upgrade their parties with Oreo cookies — and the process is simple. All they have to do is order the DJ Mixer, place each Oreo in the center of the device like a record, and let the music play. (FYI: If you try the DJ Mixer for yourself, it might be hard to go back to Apple Music or Spotify.)

Those of you who aren't already familiar with the Oreo Music Box might be a little confused about Oreo's latest music innovation. That's totally fine, though; it's not exactly "ordinary" for a snack to play songs. However, Oreo already made it possible for "America's favorite cookie" to make sound with its Music Box in November 2018. In cause you're unaware, the previously-released Music Box lets Oreo customers place a cookie in the center of a turntable and play music as the cookie spins.

Thankfully, the company's latest musical endeavor does the same thing — but now, there are more Oreos in the mix.

According to an email from Oreo to Elite Daily, there are three DJ-inspired turntables in Oreo's newest DJ Mixer. In order to make them play music, customers must place an Oreo on the turntable. Then, with every bite, new music will play. Apparently, there are over 200 music combinations to choose from while snacking — and that's a lot of songs. So if you end up using the DJ Mixer at your upcoming party, don't worry about bringing your own playlist.

If that sounds like a plan to you, you can buy your own DJ Mixer on ShopOREO.com for only $27.95. When you think about it, that's a lot cheaper than a typical DJ would cost — so why not splurge on a musical Oreo treat? Plus, when you purchase it, you'll get one package of Most Stuf Oreos and four packages of OG Oreo cookies.

Oreo cookies and music? What more could you ask for?

I don't know about you, but I'm really excited about Most Stuf Oreos being included in the the new DJ mixer. As you probably know, Most Stuf Oreo cookies take normal Oreos to the next level. If you missed out on the upgraded snacks, let me catch you up.

Oreo's Most Stuf cookies, which were released in early 2019, feature almost "quadruple" the amount of creme as an original Oreo. In fact, they're so thick that only 18 cookies fit inside each pack. If you weren't able to give them a try yet, go ahead and order Oreo's latest DJ Mixer. If you do, you'll be able to snack on the latest Oreo cookies while jamming out to sweet new tunes.

What can be better than Oreo cookies and music? The answer is nothing — so go ahead and order your DJ Mixer now.