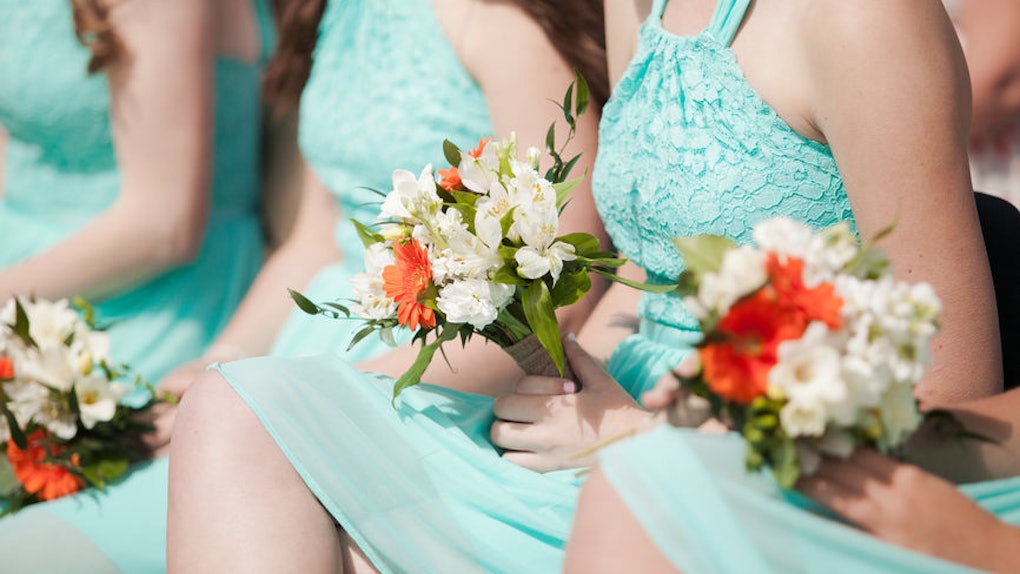 OK, are you ready for the most mind-boggling story you've ever heard? A bride asked her maid of honor to delay her boob job... to ensure that she'd be the hottest one at her wedding. Like most ridiculous stories, this one first came to the internet's attention on Reddit, where the maid of honor in question posted in the "bridezillas" sub-Reddit.

"My boob enhancement surgery is scheduled by the end of this month," the woman wrote on Reddit. "I've dreamed of it for a long time and I finally got a chance and money to do it."

Exciting for her! She finally gets to do something that she's always wanted to do. But, as you can imagine, there's a catch.

"Apparently, my best friend isn't very happy about it," she continued. "Her wedding is in early September and I am a MOH. So far everything has been going good, but yesterday she asked me whether I would consider doing it after her wedding. I was surprised, because she knows it's perfect timing for me and there are many reasons behind it. I was curious why she asked that. She said she wants to be the hottest one in her wedding party and I may overshadow her with my new boobs. I said if it bothers her so much, I will wear something not [revealing] and will not flash my boobs in front of everyone. She looked hurt and heartbroken, said a cold goodbye, and left."

The maid of honor continued, "I am kinda confused... I don't want to and can't change my date, but I feel upset about the whole situation. Some things start making sense. She didn't include our other best friend who is hellishly hot in her wedding party and we both were shocked about it, but didn't question it much," she added. "So, she picked people she thinks are less sexy than her and somehow I ended up on this list. She doesn't want me to get hotter either. I don't know how to feel."

Breast size doesn't mean one thing about how "hot" a person is, but confidence is attractive — and the only people qualified to make decisions about someone's bodies are that person and their doctor.

Luckily, the people on Reddit had some great advice. "Yikes, sounds like come August she will be an absolute nut job of a bridezilla," said one user. "Keep your surgery. You, the surgeon, and I assume some time off work has/have all been arranged. Don't buy your dress if you haven't yet. Seems like you might get benched from the 'not hot' line up."

"Keep your appointment and enjoy your new boobies! As long as you're not going out of your way to outshine the bride, I don't see an issue," wrote another. "What if you were naturally busty? Would you have been sidelined like your other friend?"

"Huh. I would feel... Tempted to tell her to find another maid of honor," wrote someone else. "If she's that f*cking shallow and indifferent to your life she's not worth your time."

To the latter, the original poster added a pretty understandable response. "The thing is, we've been best friends since kindergarten and there are a lot of things we've gone through together," she wrote. "I can't cut her off, even though she is shallow when it comes to looks. If I met her during college years, we wouldn't become so close."

That complicates things for sure. This woman isn't just some random stranger. It's her best friend. And, if nothing else, best friendships are complicated. Here's to hoping these two ladies figure it out!