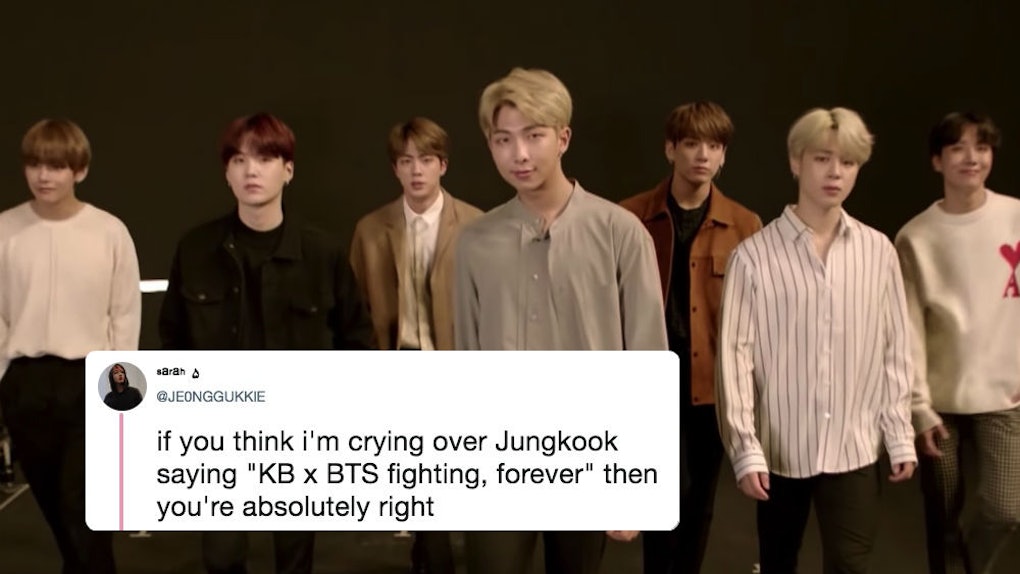 While I was busy ringing in the new year at a lame party with a glass of cheap champagne, K-pop superstars BTS were appearing in an ad for KB Kookmin Bank's online digital financial service, Liiv. One of us was clearly thriving on Jan. 1, 2019 and I'm pretty sure it wasn't me. Anyway, the 35-second spot, called "Play Digital KB," featured the seven-member band showing off the bank's Liiv digital banking platform and encouraging viewers to "go beyond the limit" with them. If you haven't seen this thing yet, you really need to watch it ASAP because it's freaking awesome. And we now have a new behind-the-scenes video of BTS' Kookmin Bank ad that's even better, since it highlights the fact that the chemistry between these seven boys is actually epic AF.

OK, so the six-and-a-half-minute behind-the-scenes vid starts off with all seven BTS boys. There's V, Suga, Jin, Jungkook, RM, Jimin, and Jhope — and they all look seriously adorable as they bow and introduce themselves to viewers on set.

"Hello, we are BTS and the global bank KB," RM says (according to an English translation by Lia Shine).

V then explains: "In this commercial, we'd like to express the innovation and enterprise which KB is pursuing in BTS' own style."

"I think BTS and KB have the same mind," adds Suga.

It's all super cute.

First, take a look at the finished ad:

Now, check out the behind-the-scenes video:

It's so good, right? And there are just so many amazing moments here to discuss. Like, for example, V hiding behind Jin and playing around with his arms like a puppeteer:

I mean, is that not the cutest thing you've ever seen?

And what about Jimin massaging Junkook's neck before doing a 180 and surprising him with a smack. LOL. I don't ask questions, ok?

There's also V and JHope laughing conspiratorially at something off-camera:

Sidebar: Can someone tell me what shade of gloss Jhope is rocking here? I need this kind of dope red lip situation in my life.

Another one of my fave moments has got to be JM joking around about how handsome Jin is.

"Since I don't have great looks as Jin-hyung, it's kind of hard," he says. "But I will work hard."

Then the two of them stage a fake fight because duh:

(Obviously, Jimin is joking about himself not having great looks because Jin's great looks are 100 percent verifiable and not a joke.)

And quite possibly a riff-off:

And finally, we have Jhope and RM cracking up about something, and c'mon guys — just tell us what it was!

This wasn't the first time BTS has appeared in an ad for KB, by the way. They first showed up in a "KB Star Banking" savings plan spot that dropped on June 21, 2018. And by December, the bank revealed it had already sold more than 180,000 of the KB X BTS savings plans.

That's a pretty impressive haul. It's obvious these guys have some serious drawing power!

More like this
Are Meghan & Harry Getting Paid For Their Netflix Show? Here's The Deal
By Sydney N. Sweeney
These Tweets About Regé-Jean Page Leaving 'Bridgerton' Are Royal Bummers
By Cianna Garrison
'Thor: Love & Thunder' Cast, Plot Details, Premiere Date, & More
By Ani Bundel
Stay up to date