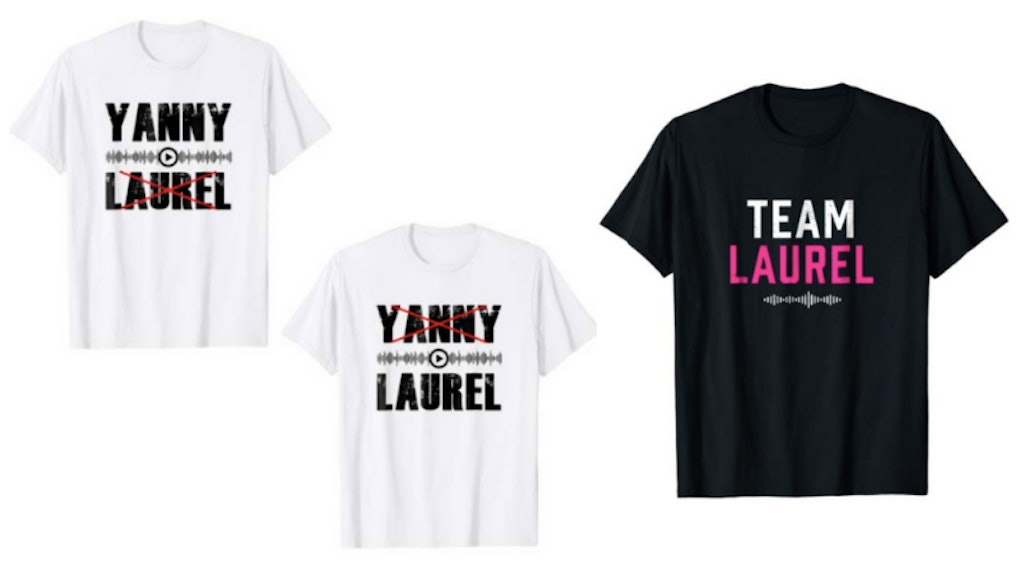 Let's take a trip down memory lane. I'm talking about all the way back to May 2018. Summer was just getting started, and all was (mostly) right with the world. In the word's of Milhouse Mussolini Van Houten from The Simpsons, "Everything's coming up Milhouse." That is, until someone released an audio recording of "Laurel versus Yanny" that tore the internet apart. It seemed like everyone was debating which word the recording was actually playing. What better way to commemorate the year's most viral event than to dress up like it for Halloween? These Yanny and Laurel Halloween 2018 costume ideas are genius AF.

The creator of the viral sound clip is an 18-year-old high school student. After posting the recording to Reddit, Roland Szabo told The New York Times that right answer is actually "Yanny." Some people claim to still hear Laurel. Why not keep the debate going by dressing up as the fervid blurb.

I can't guarantee you're going to win a costume contest or anything, but you will be the talk of the party if you show up in one of these outfits. Of course, you're going to need a partner to help you out. Here are the best Laurel versus Yanny Halloween costumes.

One of the easiest (and most affordable) ways to make a Laurel versus Yanni costume is to take the do-it-yourself route. All you'll need is a friend, two white T-shirts, and a permanent black marker. On the front of one shirt, write "Laurel," and on the front of the other shirt write, "Yanny." Just make sure you and your counterpart stick together on Halloween, otherwise the joke might be lost on some people.

If DIY isn't your thing, you can buy your Laurel versus Yanny costume on Amazon. The online retailer sells several different varieties of shirts that don the viral "Laurel versus Yanny" text. If you're team Laurel, check out this shirt from Amazon. It features the meme matchup with static noise separating the two names.

If you’ve got a counterpart in all of this, have that person wear this team Yanny shirt from Amazon. Both shirts feature the same design style, so there will be no mistaking who is who.

While the New York Times settled the Laurel versus Yanny debate, that doesn’t mean it’s over yet. As a part of your costume, you can sport this portable AmazonBasics Wireless Bluetooth Speaker and play the recording on loop. Attach

I know, it may become a bit much after a while but your friends won’t be able to resist telling you what they hear. Keep a tally on a white shirt using a black marker or carry around a notebook to keep tabs. You get to be the judge this team and settle the dispute once and for all.

4. Pick A Side: Team Laurel or Team Yanny

Don't have anyone willing to play the role of Laurel or Yanny for a joint Halloween costume? Let your opinion be known by wearing a "Team Laurel" or "Team Yanny" shirt. Both tees are available for purchase from Amazon, are under $20 each, and are eligible for free Prime shipping.

Although some of the first rumblings of the "Laurel versus Yanny" recording first started to become popular on Reddit, it really picked up traction on Twitter. This tweet from Cloe Feldman caught fire with more than 88,000 retweets and over 215,000 likes. Print out the tweet and tape it to a white shirt. If you're feeling extra, print the tweet onto transfer paper and iron it onto a white shirt.

You could also mix and match some of these costume ideas. For example, you could add the AmazonBasics portable Bluetooth speaker to this Twitter-inspired costume to take it to another level.

People have still have some pretty real feelings about the Laurel versus Yanny debate. Be prepared to open up old wounds when you rock one of these Halloween costumes at an upcoming event. Whichever one you choose, take heart in knowing that Laurel versus Yanny is the ultimate 2018 meme costume.