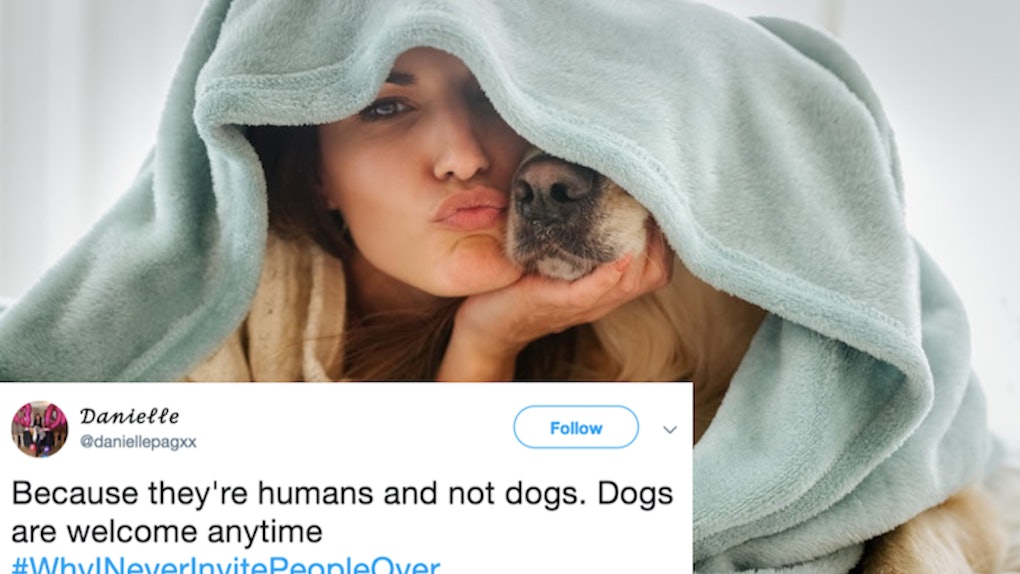 These "Why I Never Invite People Over" Tweets Will Make You LOL, Because Same

Don't get me wrong: Throwing a party is a ton of fun. You get to make some cocktails, prep a few appetizers, and hang out with your friends. But sometimes, it's nice to bypass the whole "company" thing and chill on your couch with a glass of wine. Apparently, Twitter agrees, because these "Why I Never Invite People Over" tweets are going viral. TBH, they're just as hilarious as they are relatable — and they'll make you think twice about hosting the next gathering.

As of Wednesday, June 5, the #WhyINeverInvitePeopleOver hashtag is in full swing. People of the internet are providing various reasons why they "never have people over," and they're totally understandable. Some folks don't want to clean up before a party, and others would rather hang out with their pets (I feel that). When it comes down to it, most people would rather not invite people over — and that's really OK. I mean, heck, there are so many other places to hang out with your friends, and your living room doesn't need to be one of 'em.

If you're also someone who doesn't like having company, you'll probably relate to some of the #WhyINeverInvitePeopleOver tweets. I don't know about you, but I can really relate to the tweets about hanging out with pets instead of humans.

Because, let's face it: "Dogs are welcome anytime."

Cats are welcome, too (obviously). They also have to approve of any guests that might come over.

While some people prefer hanging out with their animals, others would rather bypass the pre-party cleaning spree that comes hand in hand with having people over.

Why? "Because I hate cleaning."

Speaking of furniture, some people would rather hang out in their blanket forts than entertain guests.

Not to mention, having guests over would totally interfere with any napping schedules.

As you can see, some people want to stay cozy — but others just don't want to cook or share their food. I get it, though; groceries are really freaking expensive.

Other people want to keep their boozy beverages to themselves. (I know "sharing is caring," but that's also why "BYOB" exists, right?)

As you can see, tons of people have shared perfectly valid reasons why they don't like having company. On top of those reasons, some folks want to treat their homes as an "escape from the world" where they can recharge. (That's totally fair.)

I mean, lets face it: Having people over can be exhausting.

By the looks of it, it seems like tons of people would rather hang out by themselves than invite people over. If you're one of 'em, you can always choose a separate gathering spot to hang out with your friends. If you do that, you can see your buddies and then come back home and snuggle with your pets on the couch. Everyone wins.