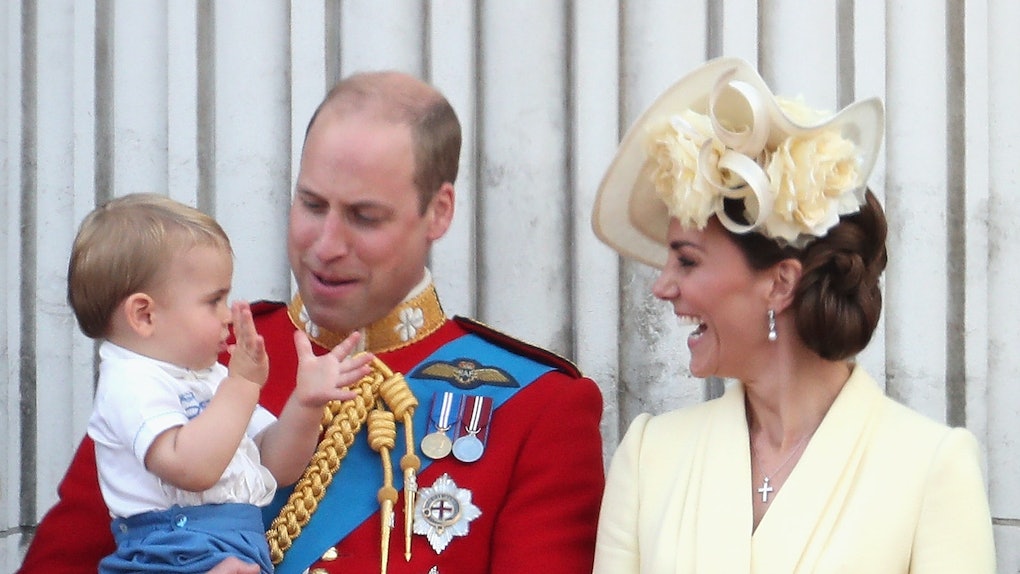 Although Meghan Markle and Prince Harry's newborn Archie was nowhere to be found at the Saturday, June 8 Trooping of the Colours celebration, baby Cambridge was busy stealing the show with his first official royal appearance. Prince Louis, who turned 1 on April 23, accompanied his parents Prince William and Kate Middleton to the annual event, which celebrates the Queen's birthday and her continuing reign — and his unexpected appearance is adorably proving that he's definitely got the whole royal thing down. These videos of Prince Louis' Trooping of the Colours debut show that he's definitely mastered the royal wave, and it'll melt your heart.

On June 8, Prince Louis exhibited some major star power in royal style at the annual celebratory parade. While Prince William and Kate Middleton's youngest child didn't ride in the carriage with his mom, Prince Harry, Meghan Markle, and Camilla, Duchess of Cornwall, the mini royal later made waves — quite literally — while posing atop the balcony at Buckingham Palace.

It's no secret that the Cambridge kids know a thing or two about working a crowd, and Prince Louis proved that he was following in Prince George and Princess Charlotte's footsteps while watching the Royal Air Force with the rest of his family during Saturday's Trooping of the Colour. Back in 2018, Prince George and Princess Charlotte stole the show along with their cousin, 7-year-old Savannah Phillips, when they couldn't stop clowning around during their balcony appearance. While Prince Louis didn't attend the festivities that year (after all, he was only a 1-month-old at the time), he proved that he definitely takes after his parents when he adorably waved at the pilots during the flypass. When the royal family began to make their exit by heading back into the palace, the toddler began waving at his grandfather Prince Charles.

Needless to say, the gesture is enchanting the Twitterverse, because it's undeniably adorable. Cue the awws, because no one can handle the young royal's cuteness.

Adorable royal gestures aside, the crowd also couldn't help but also notice that Prince Louis' outfit of choice also came with a special meaning. Prince William and Kate Middleton are all for giving us frequent doses of nostalgia with Princess Diana-inspired outfits and the like, and the couple didn't disappoint at Saturday's Trooping of the Colour.

According to People, the young royal was dressed for the occasion in the same white-and-blue ensemble that his uncle Prince Harry memorably wore back to the same event back in 1986 while being held by Princess Anne — and it'll give you all the flashbacks. Meanwhile, the Duchess of Cambridge paid tribute to Princess Anne's attire with a light yellow dress.

Considering that the annual Trooping of the Colour parade celebrates the Queen's continuing reign as well as her birthday, it's fitting that the family brought a detail that's all about family tradition to the festivities. Unfortunately, we might have a whole year to wait until we can see baby Archie make his balcony debut, but he'll have his cousins to teach him the ropes and make sure he has a memorable first appearance.

More like this
Olivia Rodrigo's Debut Album: Title, Release Date, Music Videos, Tracklist, & More Details
By Michele Mendez
These Tweets About Prince Philip's Death Will Break Royal Fans' Hearts
By Jonathan Borge
Why Did Addison Rae Deactivate Her Twitter? Fans Think This Is The Reason
By Brandy Robidoux
Stay up to date