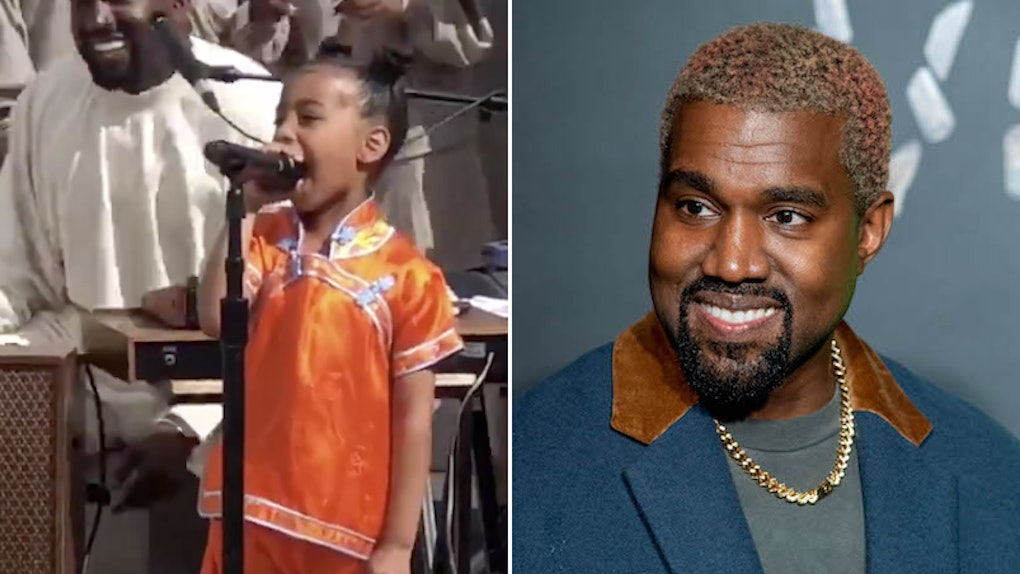 I don't know why this didn't dawn on me sooner — of course, North West is gearing up to be a singer! This whole time I was thinking she might follow in her mother Kim Kardashian's footsteps and become some sort of fashion/makeup/public personality icon. However, thanks to the videos of North West singing at Sunday service, I now have my money on music extraordinaire. That checks out, too. Her dad is Kanye West, after all, and I can only imagine his confidence is genetic.

If you're behind on Ye's Sunday services it only takes a quick scan of Kardashian's Instagram stories to get caught up. In a forced nutshell, West guides a gospel choir in a musical performance across the Los Angeles area on weekend mornings. Everyone dresses in Yeezy-inspired monochrome colors and the setlist seems to toggle between West's iconic hits and gospel. It's not really clear if any one message is being preached per se, but Kim and her sisters Kourtney and Khloé told Jimmy Kimmel it is definitely a Christian service, though all are welcome.

It’s honestly more like a healing experience for my husband. It’s just music; there’s no sermon. It’s definitely something he believes in — Jesus — and there’s a Christian vibe. But there’s no preaching. It’s just a very spiritual Christian experience.

Tell that to North, because she decided it's her own personal time to shine.

Kim and Kanye's first child is regularly featured getting down in the Sunday service videos. She usually stands out in a brightly colored outfit amongst the neutral pallet and loves to dance. Like, loves it. However, she took things up a notch over the weekend of April 7 when she grabbed a mic and sung her little heart out like the entire choir was there as her own personal backup singers. Get a load of this:

Watch how she maneuvers the microphone. Kim noted in the caption, "Had to move up front and center."

You can't deny that star instinct.

Meanwhile, West's services are apparently sweeping celebrity social circles and drawing all kinds of — I don't know what you call them — followers? Celebrities like Katy Perry, Orlando Bloom, DMX, and Courtney Love have all been spotted in the crowd. According to Variety, the events are extremely exclusive and require that everyone in attendance sign an NDA. The location also changes week to week, and has even reportedly caused a few noise complaints.

Still, based on the info that has been trickled out, it sounds like an amazing experience. Prior to the performance, guests all eat together and are reportedly "treated with kindness by security and staff — just like any church service." Everyone is also invited personally.

However, if you want to attend the exclusive event but know West doesn't have your cell number, fear not. The Sunday service experience is reportedly coming to Coachella. Elle asked if anyone with a Coachella wristband can get in, but Kim didn't have a clear answer. She explained:

I’m not sure! Everyone’s asking, even my mom. She asked, 'How many people can I bring?' I was like, 'Mom, I don’t know the set-up; I don’t even know where it’s going to be.' I’ve never even been to Coachella—I have no idea. All I know, it’s going to be 9 a.m. I’m sure half the people who come will be up from the night before. But I do hope everyone can experience it—everyone—because it’s going to be really special and so cool.

That checks out. Go get 'em, North.

More like this
These Tweets About Taylor Swift's "Mr. Perfectly Fine" All Ask 1 Important Question
By Sydney N. Sweeney
Scott Disick's Quote About Seeing Kourtney Kardashian Date Is Heartbreaking
By Candice Jalili
Travis Barker's Birthday Instagram For Kourtney Kardashian Was So Extra
By Lydia Wang
Stay up to date