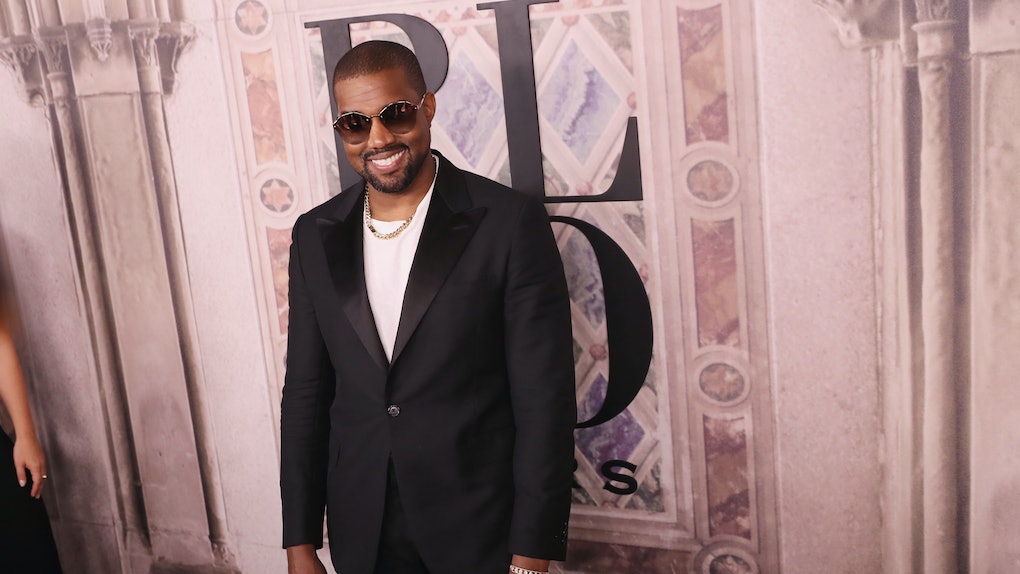 Kanye West's "Sunday Service" Is Coming To Coachella April 21, According To Kim's Tweet

Kanye's going to be at Coachella after all, folks, but he won't be performing his music in the way you'd expect. According to a video posted by Kim Kardashian-West to Twitter, Kanye has seemingly sorted out previous issues with the Coachella organizers — and he plans to bring a special kind of event to the festival on Easter morning. Kanye West's "Sunday Service" is coming to Coachella April 21, according to Kim's tweet on March 31. Elite Daily reached out to West's and Kardashian-West's representation for comment on the announcement, but did not hear back at the time of publication. So if you're headed to Coachella on Easter, get ready for the event of a lifetime.

On March 31, 2019, Kim posted a video to Twitter showing Kanye announcing his plans for Coachella 2019 to a plane full of people. In the video, Kanye can be seen grabbing the microphone at the front of the plane with a huge smile on his face as he makes the announcement. He started by saying, "Attention 737 passengers," and looked back towards the passengers to make sure he was speaking loudly enough. He then continued:

We'd like to make an announcement that we just booked another show ... We will be doing Sunday Service, Sunrise, at Coachella." The passengers on the plane burst into applause, and Kanye looked happy as a clam. Kim also posted the announcement to her Instagram story, showing support for her hubby wherever she could.

Easter falls on April 21 this year, so if you're going to be in Indio, California at that time, I'd keep your eyes peeled for how to get in on this Sunday Service action. Elite Daily reached out to West's and Kardashian-West's representation for comment on the details of what time the Sunday Service will be and if tickets will be available for purchase, but did not hear back at the time of publication.

Seeing as how happy Kanye looks to be headed to the fest, you can probably expect a pretty good performance.

In case you missed the first round of Kanye/Coachella news, I'll happily bring you up to speed. Back in January 2019, right before it was going to be announced that Kanye was headlining Coachella, the rapper made a demand that the desert festival provide him with a custom-built dome for his set, according to Billboard. When senior executives and organizers tried to explain that the construction of the dome would be impossible to achieve in such a short period of time, 'Ye got irritated and pulled out. Elite Daily reached out to West's representation for comment on the report, but did not hear back at the time of publication. Shortly thereafter, Ariana Grande was announced as the headliner of Coachella.

According to All Hip Hop, Kanye started Sunday Service at the beginning of 2019 and has consistently been holding the concert-slash-religious event at his and Kim's home all year. Some notable celebrities that have been spotted attending the service at Casa West include Courtney Love, Katy Perry, Orlando Bloom, Rick Rubin, DMX, David Letterman, Kid Cudi, Babyface, and Tyler The Creator.

But the celebs aren't even the most notable part of Sunday Service — that distinction would go to Kim and Kanye's eldest daughter, North West. If you follow Kim on Instagram, you know that the highlight of the Sunday Service events (at least the part of the events we peasants are allowed to see) is North's absolutely killer dance moves. In one video, the famous 5-year-old is seen dancing in a big purple bow and an extremely fashionable outfit; in another, she and a friend are matching in neon orange and dancing along with the color-coordinated choir.

Kimye's Sunday Service is pretty exclusive, so those who will witness it on Easter Sunday at Coachella are likely to be part of a once-in-a-lifetime event. The rest of us will just have to wait for the photos and videos to get a peak of the show!