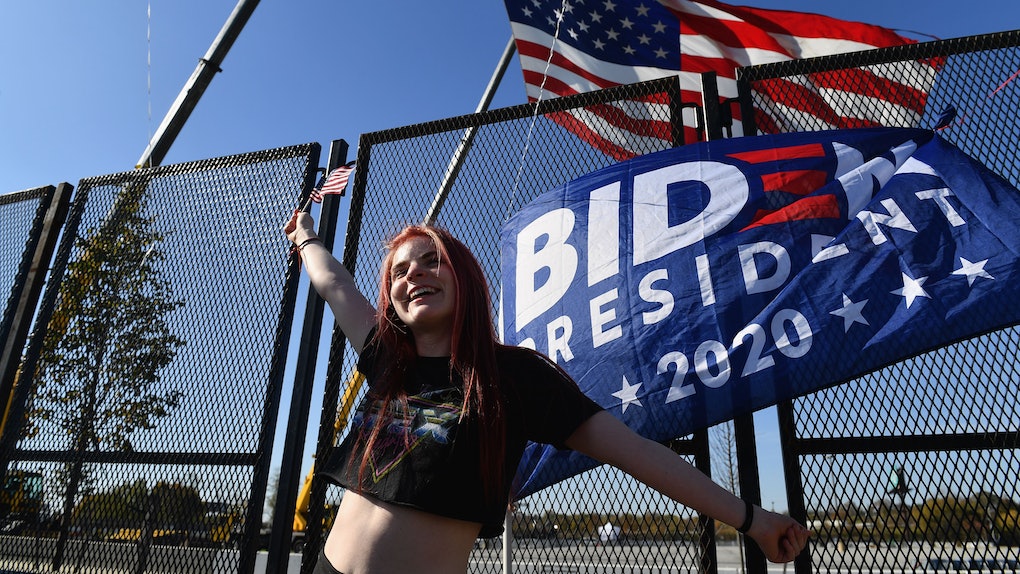 After a drawn-out election process, several major outlets finally projected former Vice President Joe Biden to win the 2020 presidential election on Saturday, Nov. 7. Immediately after the big win, a nation full of supporters took to social media to celebrate, and many also took to that celebration to the streets. These videos of celebrations after Joe Biden's 2020 win are filled with so much joy, they'll have you dancing, too.

Americans have had a particularly tense week at the start of November. After Election Day on Nov. 3, everyone was glued to the news for four days as Biden and President Donald Trump remained at a near-deadlock in electoral votes. Although Biden remained close to getting the 270 electoral votes needed to officially declare him the election's winner, the race remained too close to call for four days. The reason for the extended counting period was due to the high volume of mail-in ballots this year in response to the coronavirus pandemic.

Finally, on Saturday, Nov. 7, the Associated Press, CNN, and The New York Times all called the race for Biden, projecting him as the winner of the 2020 election. The news couldn't come soon enough for an anxious nation who'd been waiting for results for several days, and impromptu parades and dance parties erupted across America. Thankfully, people were able to capture the magic with the help of social media, and these videos of everyone celebrating Biden's big win are filled with so much emotion.

Shortly after the election was called, Biden shared a message thanking all the voters and laying out his plans for the future. "I am honored and humbled by the trust the American people have placed in me and in Vice President-elect Harris," Biden wrote in the statement, shared with Elite Daily. "In the face of unprecedented obstacles, a record number of Americans voted. Proving once again, that democracy beats deep in the heart of America. With the campaign over, it’s time to put the anger and the harsh rhetoric behind us and come together as a nation. It’s time for America to unite. And to heal. We are the United States of America. And there’s nothing we can’t do, if we do it together."

Since the election was called early in the weekend, celebrations will likely continue on across America. As of 1:30 pm ET on Saturday, Nov. 7, Trump has yet to respond to Biden's projected win or the celebrations across the nation.