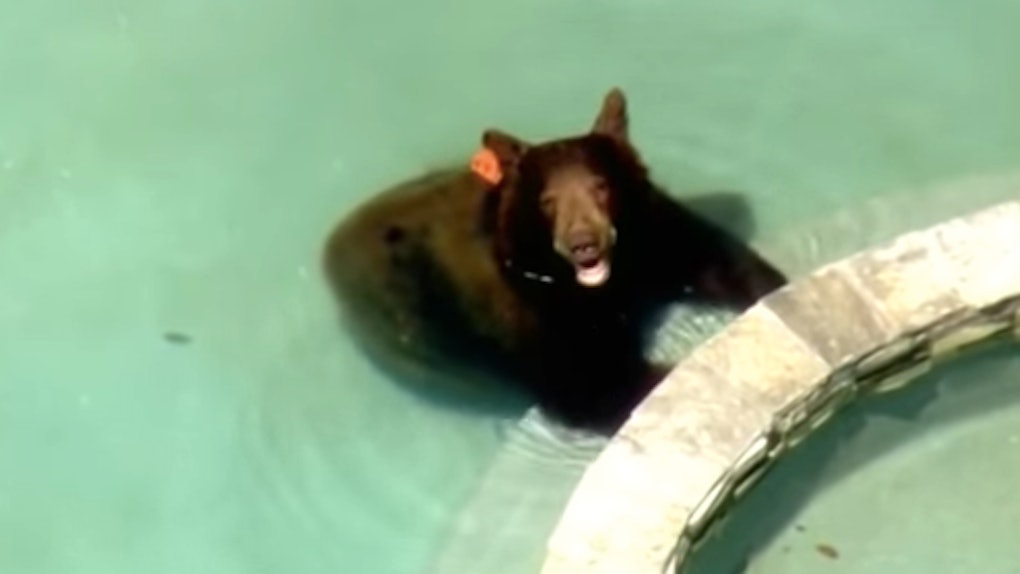 You and I both know that everybody needs a little R&R from time to time, whether that means taking a day off from work, going to a hot yoga class, or cooling off in a swimming pool. Self-care is basically vital for any and all living things, and these videos of a bear swimming in an LA pool totally prove my point. They are so relatable, and I've honestly never felt more spiritually connected to a wild bear in my entire life.

It was an unforgiving 85 degrees in the city of Los Angeles on Tuesday, July 17, according to The Los Angeles Times. So, as you could probably imagine, locals (bears included) were looking for the best possible way to cool the hell off. For some Californians, cooling off might entail buying an ice cream cone or soaking up some of that good old AC. However, for others, the best way to cool off is by taking a dip in the pool, which is what one male black bear decided to do when he stumbled through the neighborhood of Granada Hills, Los Angeles. He simply couldn't resist taking a dip, and honestly, I couldn't blame him. How else was he going to beat that un-BEAR-able heat?

The videos really say it all.

Just look at how much fun he's having. It's like a one-man (er... one-bear) pool party!

Has anyone ever had that much fun? In all honesty, I'm not entirely sure.

Anyway, since it isn't exactly safe to have wild bears swimming in people's pools and whatnot, the police, as well as animal control, had to be called. Thus, the pool party was officially crashed. According to The Los Angeles Times, the bear ended up hopping out of the pool and running through a few yards before police tranquilized him near a neighborhood drainage culvert about an hour later. Don't worry, though — the bear is doing just fine. He fell asleep and animal control managed to relocate him... hopefully to somewhere that's more conducive for hosting pool parties.

In the event that you do happen to find a bear swimming in your pool, Los Angeles County tweeted a set of guidelines on how to handle the bear in a safe manner. The rules include not approaching the bear, removing yourself from danger, calling 911, and refraining from blocking exits that the bear might use to escape. Hang on to these — they could be useful if a bear is performing his or her self-care routine in your backyard. Although they're super cute, keep in mind that they're still wild, and could do some major damage.

Long story short: bears are just like humans. Whether they're beating the heat in a swimming pool or running away from authorities, they're incredibly human-like, and I'm kind of obsessed with everything that they do. This world definitely needs some more bear content, because it's highly underrated. Now you'd excuse me, I have a bear pool party I have to go to, and I can't be late... it might get busted.

More like this
TikTok's Viral Ranch Pickles Recipe Is A Big Dill, & So Are These Other Pickle Recipes
By Marisa Casciano
Here's How To Add Auto Captions In Instagram Stories For More Accessible Videos
By Lara Walsh
These Memes About Being "Cheugy" Include Some Hilarious Realizations
By Cianna Garrison
Stay up to date