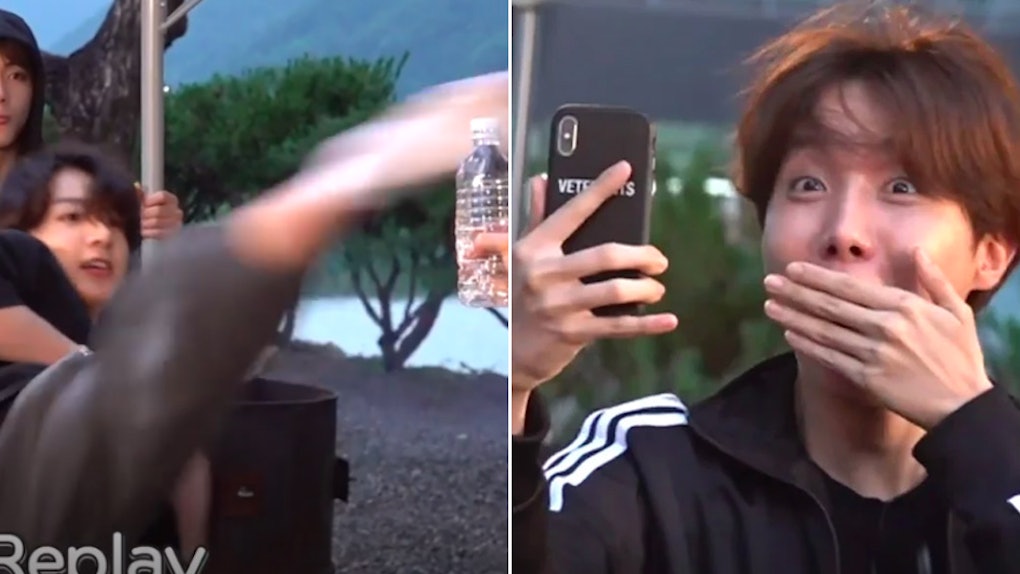 Let's make one thing clear here: no one in BTS is riding a jet ski in these videos, so they're definitely not outdoing Jenner on the fancy tricks, but their hilarious reactions to each others' attempts to kick the cap off the bottle are just so freaking adorable and funny. (But, spoiler alert: Jimin and Jungkook's spinning-high-kick skills are no small thing...)

In the videos, which were included in the season finale of their VLIVE show RUN BTS! (yes, they have a variety show on top of everything else they do), Jimin, Jungkook, and V try their hands (well, feet) at kicking a bottle cap off a plastic water bottle. Jimin was hilariously unsuccessful, but only because his kick was way too powerful. He ended up kicking the entire bottle out of V's hand during his attempt. V's kick, which was really more of an adorable flail, was equally unsuccessful, not evening making foot-to-bottle contact. Still, a commendable try.

But Jungkook? He nailed it.

V, you were that close.

You can check out the full video with all the attempts here.

The reactions to Jungkook's successful attempt are everything.

Exhibit A: J-Hope standing in shock as he records the whole thing is a whole damn mood.

And the look of sheer disappointment on V's face when Jimin knocked the entire bottle out of his hand? I felt that.

Look at that sad, empty hand. Refill it, Jimin!

The Jungkook stans can't get over Jungkook's video, especially his hair flip at the end.

The funniest part about all of this is the fact that Jimin has a black belt in Taekwondo. ARMYs are tweeting that he's just ~too powerful~, because of course they are. He is a heartthrob, after all. You can watch the whole episode on BTS' VLIVE channel to see even more BTS, like them giving each other gifts to celebrate the finale of RUN Season 3. Awwwww.

This was the 85th episode of Run BTS!, by the way. Think about that. Eighty. Five. Episodes. While the BTS guys are currently on a break for the summer to get some good relaxation before they head off on the last leg of their Love Yourself: Answer tour, they're still releasing a summer package, so don't worry. Even when they're on a break, they're still releasing some kind of content.