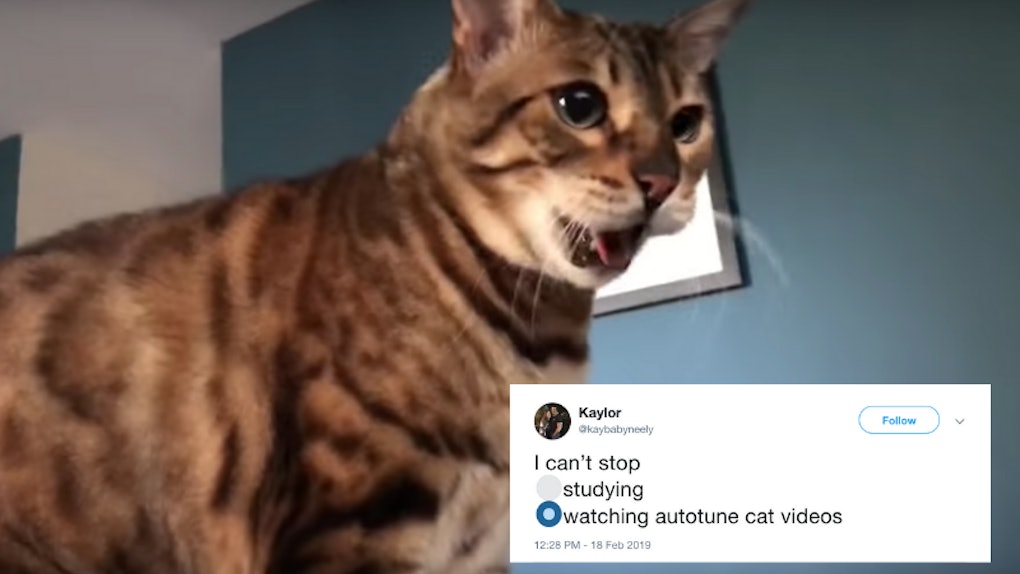 These Tweets Remixing The Autotune Cat Meme Will Make You LOL

It's February 2019, and the latest viral sensation to pique the internet's interest is a musical cat. It all started when a man named Joaquin Baldwin decided to autotune his cat Elton meowing and grace the Twitterverse with the hilarious results. The viral video has since inspired legions of viewers to create their own LOL-worthy mix tapes starring Elton, and you won't be able to stop laughing while watching these tweets remixing the autotune cat meme.

On Monday, Feb. 18, Baldwin — who happens to be a feature animation layout artist at Disney — decided to put his own twist on your typical cat video, and it's pure internet gold. In a YouTube video posted on Monday, he explained, "Autotuned the cat because he won't shut up in the mornings. I don't know how this helps but I did it anyway."

The 41-second video shared to YouTube and Twitter features Baldwin's beloved feline loudly showing off his vocal prowess around the house, including on the sink and in bed. Anyone with pets can relate to the early morning wake up calls, and the artist decided to make the best out of a noisy situation by auto tuning Elton's yowls.

He explained, "Yes, he's a Bengal, his name is Elton. I used an app called Voloco for iOS to make the autotune sounds. And no, he's not thirsty, he just happened to be by the faucet in part of the video because I was brushing my teeth. This is his 'love me now' voice, he comes to bed in the morning to knead and purr and loudly meow to get some scritches."

The results of Elton's altered "love me know" voice will have you giggling uncontrollably, because, let's be honest, Britney Spears and T-Pain have nothing on this cat.

The LOL-worthy video was everything the internet didn't know it needed on a dreary Monday in late February, and because the Twitterverse is a strange and wonderful place, its users decided to deliver even more hours of cat-tastic entertainment by making their own remixes and showing how their own cats reacted to hearing the meow mash-up.

There's even a "Yass" version, because why not?

Baldwin created the video using Voloco, which is an app that can basically pitch correct any sounds you can think of, from shoveling snow to sneezing. It's free to download and use, so be prepared to fall down an auto tuning hole if you decide to get it on your smartphone.

Unfortunately, it's unlikely that we'll be getting more mix tapes anytime soon as Baldwin commented on Twitter, "Elton is taking a break from all the fame now, no autographs pls." Still, I wouldn't rule out any future recordings, and in the meantime, there's always this autotune dog gem, which was first released back in 2010.

Who knew that your pup's dulcet howls could sound so sweet?

Now, excuse me while I go and re-watch this video of Elton for the millionth time.