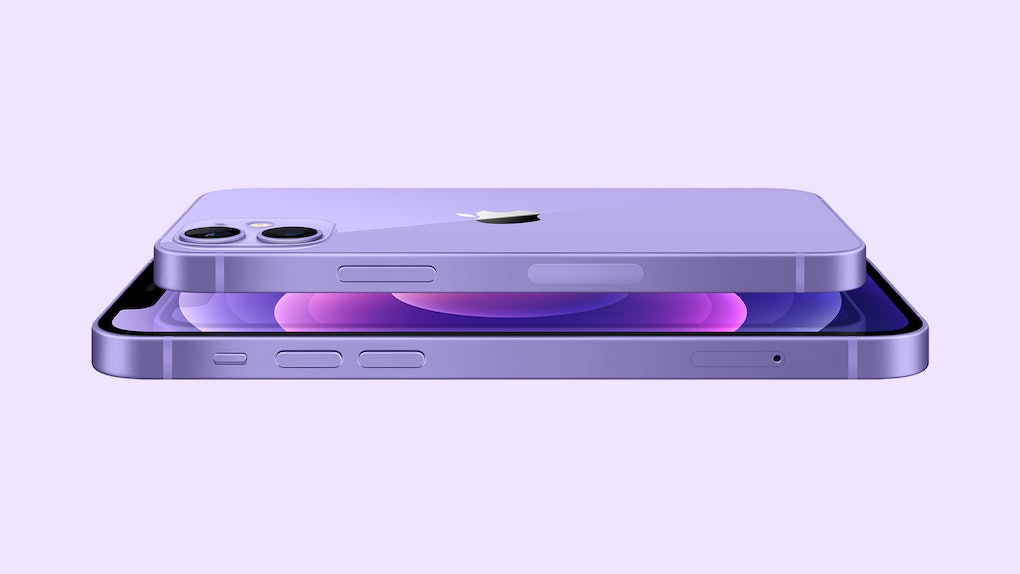 The internet is buzzing after Apple CEO Tim Cook surprised fans by announcing the iPhone 12 and the iPhone 12 mini will be available to purchase in a purple color starting on April 30. The reveal, which was announced during the company's April 20 "Spring Loaded" event, drew significant hype due to the smartphone's extremely ~aesthetic~ hue — and these tweets and memes about the purple iPhone 12 show people are poised to add it to their shopping carts.

When the new purple iPhone 12 and iPhone 12 mini becomes available for pre-order on Friday, April 23, you'll now be able to get the newest iPhones in six colors including blue, green, black, white, and red. While the iPhone 12 line is no stranger to popular colors (the iPhone 12 Pro's Pacific Blue hue got some serious hype when it was unveiled back in October 2020), fans are so excited that the two more affordable devices in Apple's latest generation of iPhones now come in a color that is, to put it plainly, so stunning. The purple iPhone 12 and iPhone 12 mini (which some fans are comparing to the lilac iPhone 11) will start at $799 and $699, respectively, when they officially go on sale on April 30, and people are unable to contain their excitement.

People might not *need* a millennial purple iPhone 12 at this time, especially with the iPhone 13 suspected to launch in the fall of 2021, but this hue is a pretty compelling reason to make the upgrade (or, if you have an iPhone 12 Pro, downgrade). Our bank accounts might not be happy about it, but Apple might as well take all of our money right now.

Some people also took to social media to admit they were thinking of buying the purple iPhone just for the color, even though they really don't need another phone. (The iPhone 12 and 12 mini were only released less than six months ago.)

Keep in mind that the purple iPhone 12 and iPhone 12 mini aren't officially available to pre-order until Friday, April 23, so you have some time to mull over your purchase and decide if the ~aesthetic~ color is actually worth the splurge when the time comes.