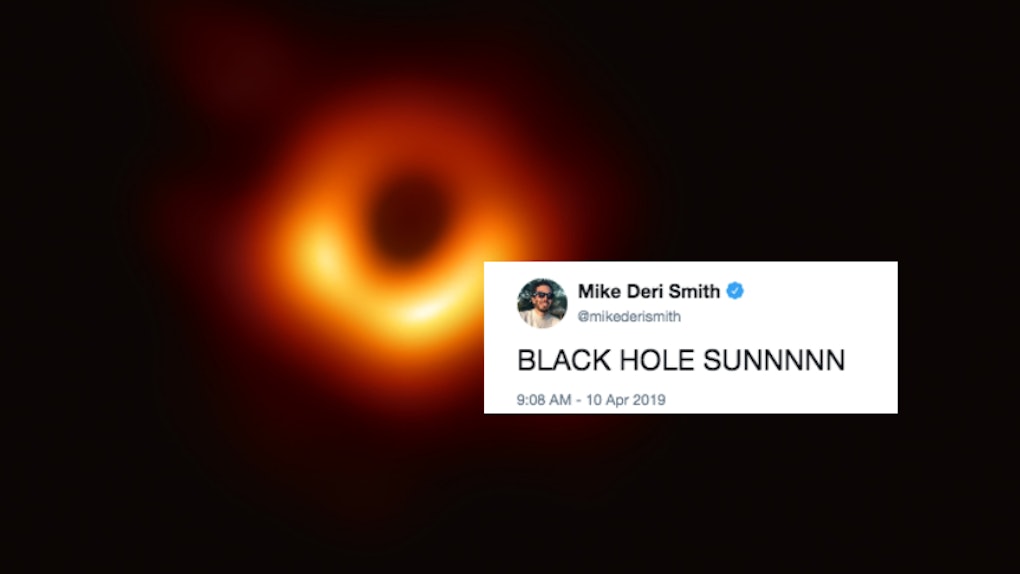 In case you haven't been on Twitter Wednesday morning, the site is exploding with news over the first image of a black hole. The exclusive look was released on Wednesday, April 10, and it really is quite remarkable. However, this incredible scientific image isn't immune from a few good laughs. Leave it to Twitter to welcome the first picture of a black hole with endless jokes. If you're in the mood for some quality content, these tweets and memes about the first black hole photo are out of this world.

After many moons of waiting, on Wednesday, April 10, the National Science Foundation (NSF) and Event Horizon Telescope announced the first picture ever taken of a black hole. According to a press release from NSF, more than 200 researchers worked together to capture the picture. The image might not look like much to you, but the photo is a really big deal for the entire space community. But, Twitter, being the place where anything goes, decided to have a little fun with the release of the image.

There are a handful of tweets and memes comparing the blurry, circular black hole image to giant doughnuts. While other Twitter users made jokes around Soundgarden's hit song "Black Hole Sun."

My personal favorite of these tweets comes from none other than @Questlove. About 30 minutes after the release of the iconic black hole image, @Questlove, quoting The New York Times' write up of the news, sent a tweet that said, "Lol I thought we were living in the black hole." I see what you did there, Questlove. Touché.

Although, some users like @GarbodorianGray are already over the tweets and memes about the black hole. The user sent a tweet that reads, "It's only been a few hours and I'm already bored and annoyed by the black hole being photoshopped onto things lol."

All jokes aside, the fact that scientists were able to capture a black hole on camera for the first time is an exceptional feat, IMO. The photographed black hole, which took years to capture, is 55 million light-years from Earth, according to the NSF's release. Yeah, I don't have any real concept of what that means, either.

To bring us both up to speed on what exactly that means, I did some quick research on the topic. According to NASA, a light year is the "total distance that a beam of light, moving in a straight line, travels in one year." So, per the space agency, one light year equates to nearly 6 trillion miles. Mind. Blown.

A black hole sounds really terrifying to me. While I was busy learning about light years, I also took a few minutes to brush up on my knowledge of black holes. Which, prior to today, wasn't much. On Wednesday, The New York Times wrote that a "black hole is a hungry beast." That's just about all I need to know. Per the NYT, a black hole will consume everything, never to be seen again. Basically, the gravitational pull of a black hole is so strong that nothing can escape it. Um, no thanks.

Don't get me wrong, I applaud the science community for capturing something of this magnitude for the very first time. But I think I'll stay put right where I am and keep reading these tweets and memes.