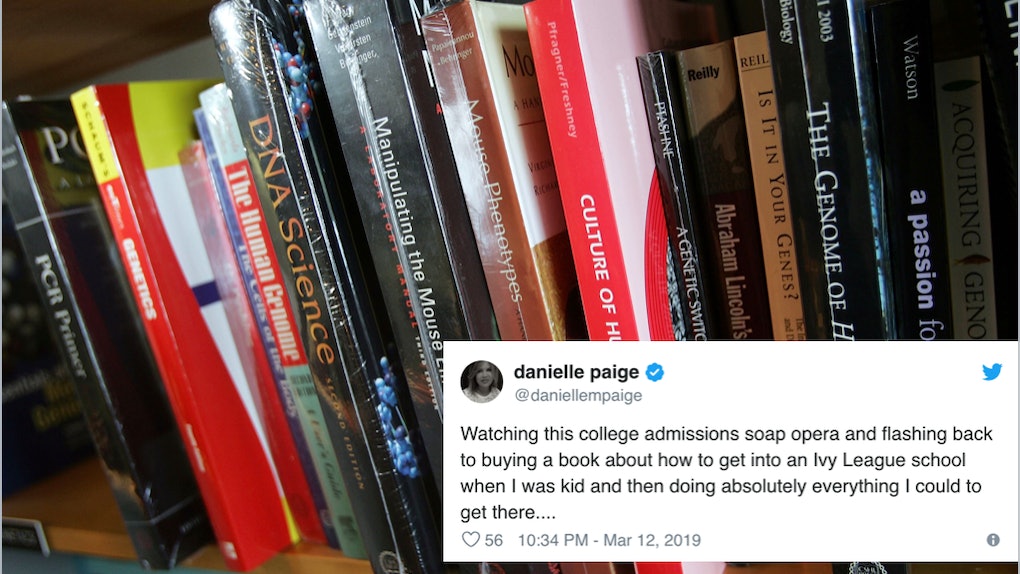 Remember when you were poring over college applications? How about all the hours spent fine-tuning your essay, and that feeling that even though you'd met all the requirements, there's no guarantee that you'd get a chance to enter the ivy-covered buildings of your dreams? Well, that's allegedly exactly what happened in a major story that's still unfolding, and these tweets and memes about the 2019 college admissions scandal will make you pretty angry, but also have you thinking, "Duh."

News broke Tuesday, March 12 that a number of celebrities have been implicated in a major scandal to allegedly bribe their kids' way into a number of big-name universities, like Yale and Stanford. Elite Daily reached out to the U.S. Attorney's Office of the District of Massachusetts, which is leading the case and brought the indictments forward, for comment, but did not immediately hear back. According to The New York Times, federal prosecutors charged 50 people, including celebrities and other wealthy parents for allegedly cheating their children's way into schools, including by allegedly falsifying scores on standardized tests like the SATs and ACTs. In separate statements shared with Elite Daily, College Board, which administers the SATs, and ACT both said that they had cooperated with the investigation and were committed to ensuring equal opportunities for the students taking their tests, with both organizations denouncing the allegations of cheating. A number of athletic coaches were also indicted for allegedly taking bribes to falsely claim students as top athletes so they'd be recruited by a number of top schools.

The news started to gain attention with names like Lori Loughlin — Aunt Becky, for those of us who know her best — and Felicity Huffman both indicted in the scandal, according to Variety. A spokesperson for Loughlin said she "does not have any information to share" in response to Elite Daily's request for comment, while Huffman's spokesperson did not immediately respond to Elite Daily's request for comment. It became a hot-button issue for Twitter. Anyone who worked really hard to get into college would be upset upon learning that privileged kids can allegedly just buy their way in.

This particular tweet about student loans spoke directly to me. Thanks, @SuetheTrex. Thank you.

"Goodnight, and good luck." — My parents.

It's time to place your bets.

Obviously, there were also a ton of Aunt Becky memes.

The scandal also raised a lot of talk about how, even if not committing crimes, wealthy students can have an advantage over the less affluent when it comes to applying to college. Many people pointed out that students whose parents can afford to, say, pay for SAT tutors or editors for admissions essays, have an advantage over those whose parents can't. And that's not to mention parents who can afford to reportedly donate millions of dollars to a school at the same time their child is applying to the institution.

Hey, I can sit here and look at Aunt Becky memes all day (they are as funny as they are disappointing), but let's get down to the nuts and bolts of this whole higher ed showdown. According to Variety, this whole scandal was allegedly made possible by alleged ringleader William Rick Singer, who allegedly set up a fake charity called Key Worldwide Foundation to launder bribe payments, per authorities. Elite Daily reached out to Singer via Key Worldwide Foundation for comment on the charges, but did not immediately hear back. In a press conference, Andrew Lelling, the U.S. attorney for the District of Massachusetts said that Singer allegedly accepted a series of payments from parents between 2011 and 2018 "to guarantee their children's admission to elite schools." In total, federal investigators say that they found around $25 million in bribes, according to ABC News. Once the payments were made through the foundation, Singer then allegedly found a way to get the children into elite schools. Sometimes it was by allegedly bribing coaches to pretend certain students were "recruited competitive athletes when, in fact, the applicants were not," said Lelling. Other times, Singer would allegedly arrange for the student's ACT and SAT tests to be rigged, sometimes without the students' knowledge, by allegedly bribing test administrators at certain test taking locations, according to ABC News. Elite Daily reached out to Key Worldwide Foundation for comment on the allegations, but did not immediately hear back.

In the case of Huffman, according to a Federal Bureau of Investigation (FBI) affidavit obtained by Variety, recorded phone calls appear to sound like Huffman allegedly discussing a rigged SAT test for her daughter. Huffman, who is accused of paying Singer's Key Worldwide Foundation $15,000 to help rig her daughter's SAT, was arrested on Tuesday. Elite Daily reached out to Huffman's spokesperson for comment on the accusation, but did not immediately hear back.

This whole scandal is pretty bonkers. There must have been a Gossip Girl episode about that, someone get back to me on that.