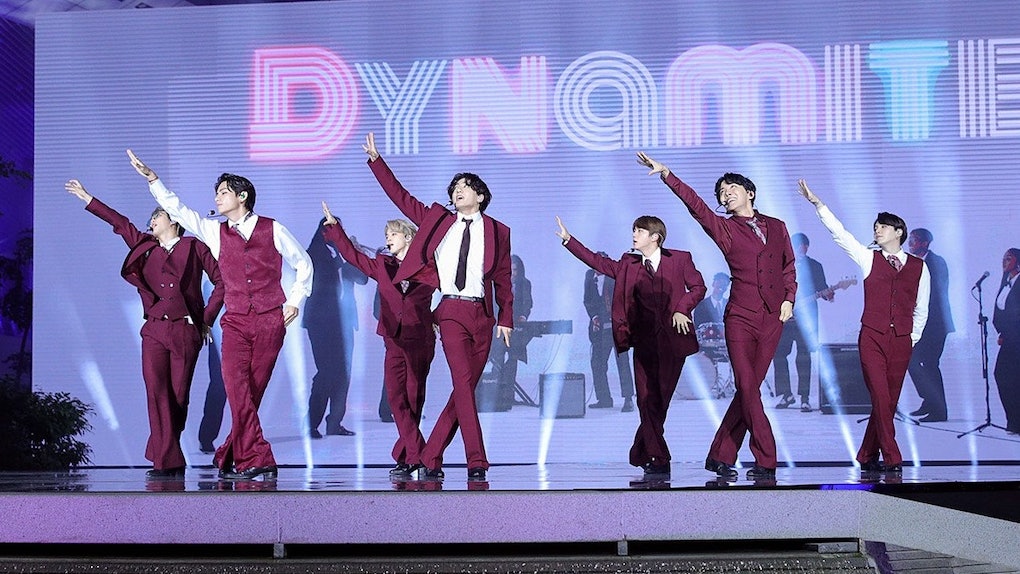 On Friday, April 9, SuperM dropped the music video for their newest song "We DO." The track and its lyrics include elements of funk and disco, and the music video is full of colorful, retro vibes, and vintage choreography reminiscent of the Jackson 5. Since BTS' "Dynamite" music video, which released in August 2020, had a similar theme, fans couldn't help but draw comparisons between the two visuals. These tweets comparing SuperM's "We Do" to BTS' "Dynamite" video are split because while some argue they're the same concept, others say they're different.

SuperM released their English-language track "We DO" as part of Prudential Corporation Asia's "Dance For Wellness" campaign," which aims to "promote the importance of staying fit and healthy, especially during these times." The song is about having a good time dancing, so of course, the group's MV is full of fun choreography. The visuals also include SuperM hanging out at a laundromat, playing billiards at a bar, and dancing on a stage in front of a cityscape and massive display of fireworks.

Fans pointed out BTS' "Dynamite" MV included similar imagery of them dancing disco choreo and vising retro locations like an old record shop and donut burger joint. At the end, the septet also performed in front of a huge fireworks show to go along with their "Dynamite" theme. Because of this, some users are saying "We DO"'s concept is too similar to "Dynamite"'s.

Some even went so far as to say the lyrics were similar as well. In "Dynamite," BTS sings, "I'm diamond, you know I glow up... Shining through the city with a little funk and soul," and in "We DO," SuperM sings, "Shining bright like gold."

"Watched 30 seconds of superm's new mv... they're not even trying to hide that they copied everything off the vibe of dynamite," one person tweeted.

"SuperM 'we do' .... the dynamite print is real people. Love to see it," another wrote.

Check out other comparisons fans made between the two songs and music videos below.

However, there were some fans that said just because both groups followed retro concepts, doesn't mean one copied the other.

Some fans said everyone should stop comparing the two and just enjoy BTS and SuperM's music.

Watch BTS' "Dynamite" music video below and decide for yourself.