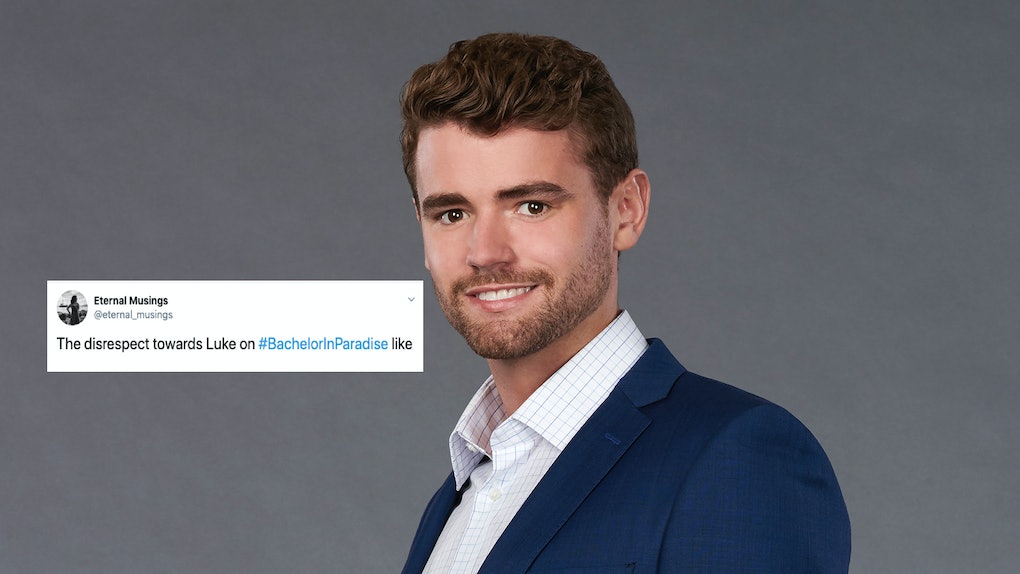 These Tweets Comparing Luke S. To Nick Viall On 'Bachelor In Paradise' Are Too Much

After so many seasons of the Bachelor franchise, there are bound to be some repeat people. For starters, there are contestants like Chris Bukowski, who have been around for so many seasons they become known as Bachelor franchise regulars. But then there are also people who only seem like they've been around for a long time, simply because they look just like another contestant. That's definitely the case with Luke Stone, who bears a striking resemblance to another Bachelor Nation favorite. These tweets comparing Luke S. to Nick Viall on Bachelor in Paradise are a lot for all of Bachelor Nation to handle.

After Luke S. was a contestant during Hannah Brown's season of The Bachelorette, he joined Bachelor in Paradise during the Sept 2. episode. But that's not the only reason his face might look familiar to fans. He actually has a Bachelor Nation doppelgänger in Nick Viall, the seasoned franchise alum who led Season 21 of The Bachelor. As soon as Luke S. arrived in Paradise, people noted the similarity.

This isn't the first time the two have been compared to each other: Luke's visual similarity to Nick in even mentioned in his official ABC bio. The producers of Bachelor in Paradise hammered the connection in even more for audiences by providing a truly spot-on side-by-side video of them both saying they're "excited to see how this goes" in unison.

When Luke S. joined everyone in Paradise, the rest of the cast noted just how much he looks like Nick. Haley Ferguson even went so far as to call him "the poor man's Nick Viall," which kind of just seems like a less-than-generous way to make the comparison. Twitter certainly had a lot to say about her harsh assessment.

However, while some fans found the Nick Viall analogy accurate, others were offended on behalf of Luke S. Those fans seem to believe the beach's newcomer deserved a different description than that.

Luke S. arrived in Paradise at the same time as Matt Donald, who was also from Hannah's season of The Bachelorette. Thanks to the timing of their arrivals, Luke S. and Matt each got to ask a woman to go on a double date with them. While Matt chose Sydney Lotuaco, Luke S. picked Kristina Schulman. This is somewhat ironic, since it just so happens that Kristina is from Nick's season of The Bachelor, so she knows a thing or two about dating someone with his look. Fans were quick to point out that it seems like Kristina might have a type.

While a lot of people noticed the Luke S. and Nick similarities, others didn't see it at all. Some fans saw some other doppelgängers for Luke S.

Regardless of who he looks like, here's hoping Luke S. gets to stick around on Paradise to prove to viewers that he is his own person.

Season 6 of Bachelor in Paradise continues at 8 p.m. ET on Tuesday, Sept. 3, on ABC.