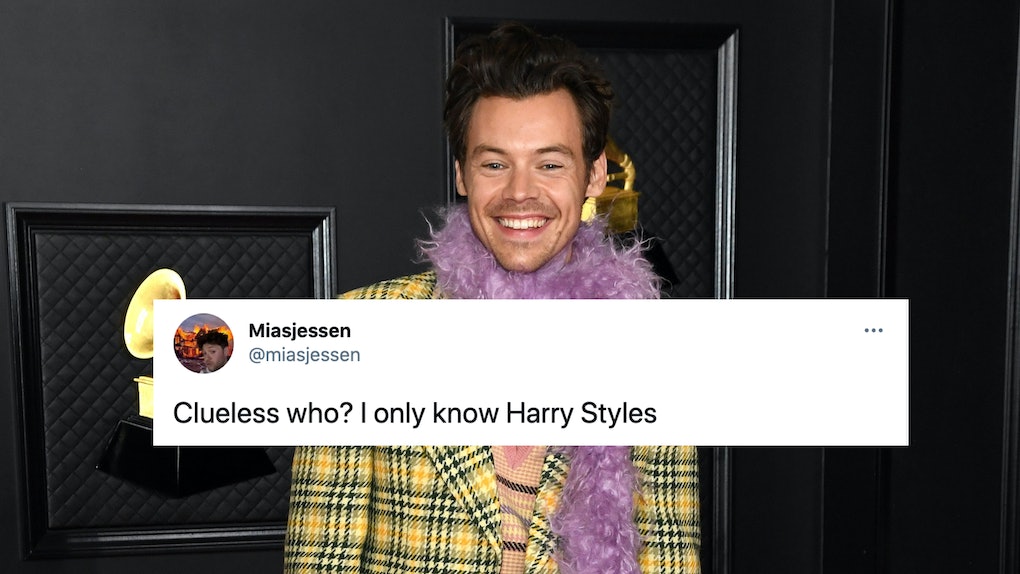 The 63rd annual Grammy Awards has been like medicine to my soul. After not seeing a live performance in almost a year, it's so amazing to see all my favorite musicians bringing their A-games. But, these impressive people go beyond just their wins or their performances. After opening the show with an incredible performance of "Watermelon Sugar," the internet can't get enough of Harry Styles' Clueless look at the 2021 Grammys.

For his red carpet and award-accepting look, Styles, the winner of the 2021 Best Pop Solo Performance Grammy, wore a purple feathered boa, brown flared paints, a striped sweater vest, and a yellow plaid blazer. However, an extra special detail popped as the "Adore You" singer got up to accept his award. That's right, he even had a matching yellow plaid mask. All of it was, naturally, designed by Gucci and styled by his longtime stylist Harry Lambert.

While Styles could literally put on a potato sack and have me writing sonnets, this look is causing a bit of a Twitter storm. Alongside celebrating his first Grammy win as a solo artist, fans were quick to notice that the 27-year-old's blazer looks a lot like Cher's from the opening montage of Clueless. "Cher from Clueless who? We only know Harry Styles," one user put it. All I can say is that, if they're planning on rebooting the iconic film, I definitely have an idea for who should replace Alicia Silverstone.