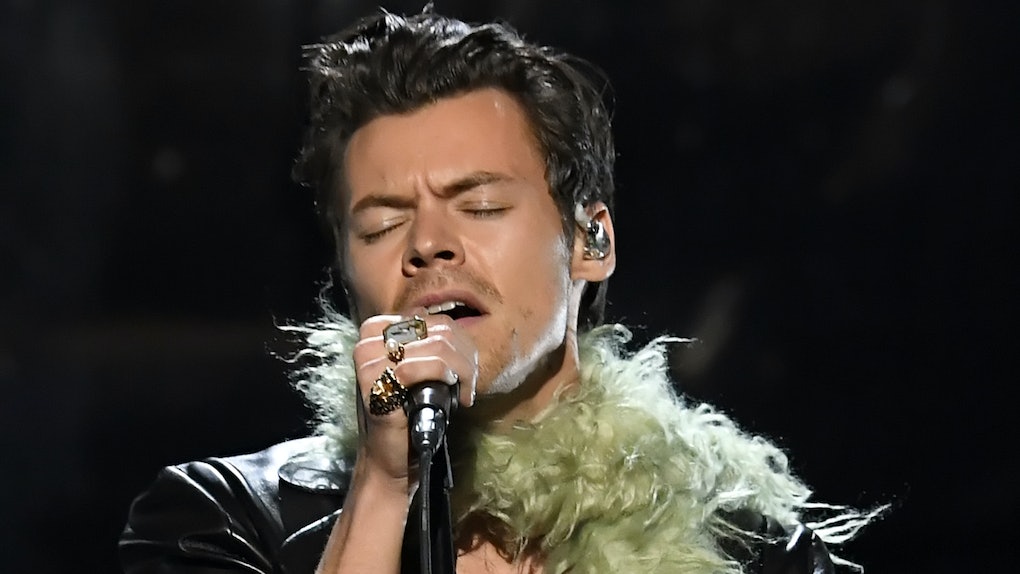 With award season in full swing, everyone's eyes are on the red carpets, even if they're happening partially over Zoom. At the 63rd annual Grammy Awards, a ton of your favorite celebs are looking flawless, but there's one person whose look I can't help but adore. Between three nominations and opening the show with an impeccable performance, Harry Styles' 2021 Grammy looks are everything, and the internet has so much to say about it.

For his first look, the "Watermelon Sugar" singer wore a gorgeous black suit, under which he was shirtless, I might add, styled by his longtime stylist Harry Lambert, whose fashion expertise has further catapulted Styles to new sartorial heights, in addition to his musical accomplishments. Unsurprisingly, the entire leather suit came from Styles' favorite brand Gucci. Along with the suit, which featured a shiny finish and flared pants, Styles wore a light green, feathered boa, and I have never wanted to be an item of clothing more in my life.

For a different red carpet look, Styles brought even more color with his outfit. He donned another feather boa, though this time in purple, and paired it with a bright yellow, plaid jacket; a beige striped sweater vest; and flared, brown pants. Peeking out from his corduroys were butter yellow boots that were simply a chef's kiss to the overall look.

But, don't worry, the boa parade didn't end there. In a flyby shot during Dua Lipa's acceptance for Best Pop Album, Styles changed into a look more fitting for the dark night sky. His yellow blazer was exchanged for a warm brown jacket and his lilac scarf became a black feather boa.

Styles has been a fashion icon on the red carpet since his days in One Direction. I mean, his black-and-white floral suit from the 2015 American Music Awards lives rent-free in my head to this very second. Since then, his style has only gotten more eclectic, daring, and straight up exciting; he's worn see-through tops, full argyle, and lots of sequins. When I say I watch the red carpet for Styles, it's not just because of his infectious smile.

It was only a few months ago that Styles made the internet go buck wild with his Gucci dress from his Vogue December 2020 cover, and I think I can speak for the nation when I say thank God he's back at it again with his Grammys looks. To see a snapshot of the Styles' chaos, scroll below to see the intense, fangirling happening on Twitter. If I've posted more than a few tweets about it myself, that's for me and my followers to know.