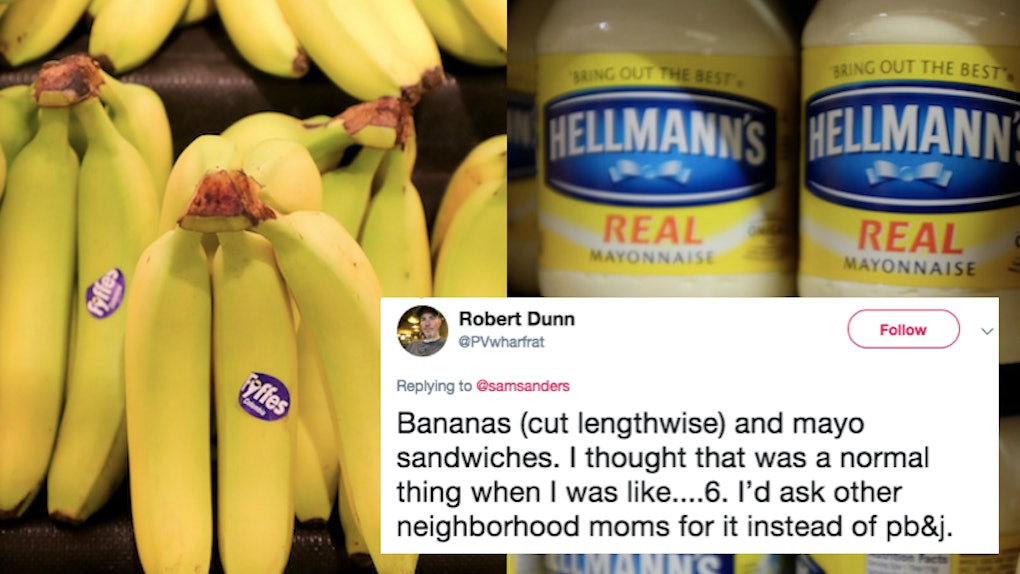 These Tweets About Weird Food Habits From Childhood Will Make You Laugh, Then Gag

Part of being a child meant that enjoying the strangest food combinations, like peanut butter and mustard sandwiches and shots of Worcestershire sauce, was completely socially acceptable and done without shame. Such was the content of a Sunday, Feb. 17 Twitter thread started by NPR's SamSanders, who asked his fellow Twitter users to share the most bizarre foods they liked to eat when they were little. Because the Twitterverse is a bizarre yet wonderful place, its users totally delivered with some stomach-turning results, and these tweets about weird food habits from childhood are pure entertainment gold.

On Sunday, Sam Sanders, whose the host of an NPR show called "It's Been A Minute," decided to pose a question to the Twitter community that's sure to bring back some fond or pretty gross memories, depending on how you look at it.

"Tell me your Weirdest eating/drinking habit you had as a kid!" he wrote on the platform, continuing, "I’ll go first: When I was like 8 years old, I used to carry a little bottle of apple cider vinegar around wherever I went, taking a swig every now and then like a lush w/his flask."

TBH, it sounds like Sanders was ahead of his time, considering that a lot of adults do drink apple cider vinegar nowadays for health-related reasons, but Twitter users quickly took the host up on his offer with hilarious revelations that'll probably have you saying, "Same," while shuddering at the memory or straight-up gagging. It's been said that kids are picky eaters, but that doesn't seem to extend to condiments, which were a popular category in the comments section.

Many users copped to making sandwiches with a combination of mustard, peanut butter, ketchup, or mayonnaise, or just spreading the condiments on their base of choice, i.e. bologna or spaghetti. One mustard lover even admitted to drinking the yellow stuff straight out of the bottle — with a straw, no less.

Speaking of weird drinking routines, some Twitter users appeared to have foreshadowed their adult habits by oh-so-sneakily taking shots of Worcestershire sauce and pickle juice (hello, pickle backs) whenever they could.

User Nicholas Alex quickly figured out that Half & Half creamer is basically like milk, but better, and would slam shots at a diner.

Many of the commenters admitted they were all about texture, consuming mouthfuls of powdered creamer, dried oatmeal, and uncooked ramen and spaghetti noodles.

Some entries showed some kids were way ahead of the curve when it came to eating their veggies.

I was shocked (and slightly horrified) that so many commenters copped to enjoying the taste of milkbone dog biscuits and even giving cat food a spin.

While I'm all about enjoying the sweet and salty flavor combination as an adult, the weirdest answers in the thread revolved around kids figuring out they liked mixing sweet, sour, and salty items with some seriously creative mash-ups. Milk and pickles, anyone?

IMHO, user @c_arise probably took the cake with the most nauseating creation while trying to play gourmet chef.

"I would make myself gourmet meals, cooked all by myself, of hot dogs sliced up and fried in Chinese takeout mustard and then coated in dried mashed potato flakes," she wrote. Why, just why?

These are just a few of the gems that people have admitted to on Sanders' thread, so I'd recommend checking them all out and maybe even submitting your own contender if you're looking for a laugh.