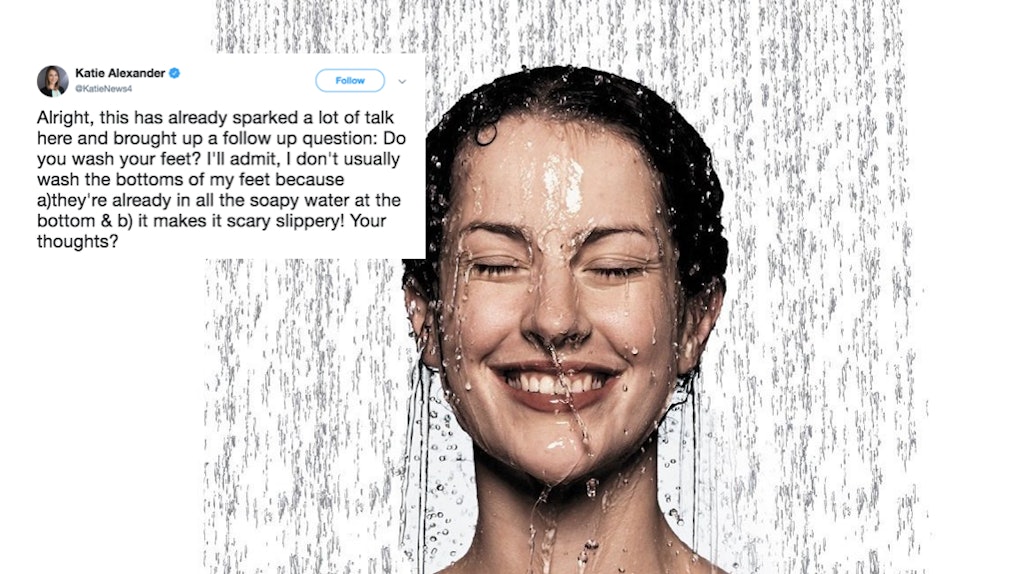 On May 9, a Twitter user who goes by the name Conor Arpwel asked: " Do you wash your legs when you take a shower?" Close to 700,000 users responded. Most users claimed they do — in fact — wash their legs, while about 20% said they don't.

Then, things got wild. As a follow up to this debate on May 16, WIBV news anchor Katie Alexander tweeted to ask her followers if they wash their feet. She claims "they're already in the soapy water" so therefore, doing so isn't necessary. This sparked heated discussions across the social media site, and the responses might shock you.

Some feel that washing your feet in the shower is completely necessary, and I'll be honest — I'm with you guys. How else will you ensure that your feet are totally clean after a long day of hanging out in your sweat-trapping socks? I'm not a hygiene fairy or a doctor by any means, but I will say that scrubbing your feet is much needed, y'all.

Then, there's the rest of the population who supposedly "let the soap and water flow do the work." OK, I'm trying my best not to judge you all, but I really don't think washing up top will do the trick for your lower appendages. Just saying.

All I can say is, "Yikes, there are sure some strong hygiene opinions out there."

Ellen DeGeneres and Taylor Swift even approached th matter when she did an interview on The Ellen DeGeneres Show on Wednesday, May 15. And while the episode was overall bound to be a good one (I mean, what a duo!), Swift's response was — um — a little unexpected, to say the least. When asked if she washes her legs in the shower, the "Trouble" singer responded, "I do." Which is totally normal, and I applaud her for it. But then, she continued, "Because when you shave your legs, the shaving cream is like soap, right?" she said. Uh, what?

Yeah... not sure where she was going with that, but I'm not totally sold that shaving and washing with soap are the same thing. But hey — you do you, T. Swizzle.

Anyway, it seems like this shower debate is never-ending. Some people are super adamant about washing their legs and feet (myself included) and others don't deem it a necessary part of *every* shower. I guess whatever gets you through the day works fine for you, but here's a friendly reminder: Don't forget to wash behind your ears; make sure to floss; and please wash your hands after using the restroom. IDK about you, but I'm super down with personal hygiene.