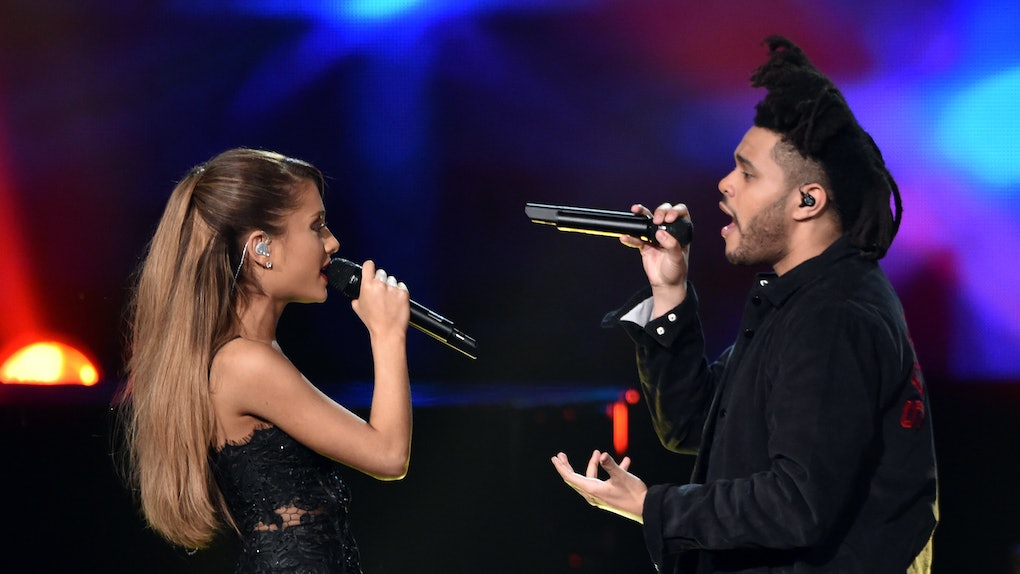 The Weeknd’s “Save Your Tears” just got even more irresistible all thanks to Ariana Grande. The pop sensations teamed up to release a remix of the song on Friday, April 23, and there’s a new music video for it, too. Although this isn’t the first time they've hypnotized fans with a collab, this is the first time since 2014 they’ve dropped a video together, which is major. But even without the video, stans are shook by how heavenly the pair sounds. In fact, there are so many amazing tweets about The Weeknd and Ariana Grande’s “Save Your Tears” remix.

Grande and The Weekend have worked together before, and each time seems more perfect than the last. The two superstars initially collaborated on Grande's “Love Me Harder” back in 2014, and fans had another taste of the dynamic duo’s harmonies last year, when she featured him on a track called “Off the Table” (from her 2020 album, Positions).

But stans are convinced that what makes the “Save Your Tears” remix so special are the song’s vocals. IMO, this makes total sense, since Grande could make a belch sound angelic, and since The Weeknd’s live performances always prove that he’s got killer pipes, too. From beautiful harmonies between the two to Grande's amazing high notes, the song definitely embodies some amazing vocals worth freaking out about, which is why fans haven't hesitated to do so.

First thing's first: the Abel and Ari's harmonies are pretty legendary. Some fans are obsessed with how both singer's unique inflections work so well together, creating such a smooth, sophisticated sound.

Other Ari-Abel supporters were in love with the way the two singers' voices complemented one another as they finished each other's verses in the song's final chorus.

In fact, some fans are trying to re-execute the magic themselves, which I'm totally here for.

It's safe to say that The Weeknd's decision to include Grande on the "Save Your Tears" remix was a great idea — and both artists did that. But many of Grande's fans are especially hyped about their fave's vocal idiosyncrasies, which shine throughout the song.

Whether your favorite parts of the song are its numerous harmonies, The Weeknd's always-moody vibes, or Grande's gorgeous voice, one thing all fans can agree on is that Abel and Ari ate up, per usual.

I'm for sure going to have this remix on repeat from here on out. However, at this rate, it seems like Abel and Ari are officially long-time collaborators — so "Save Your Tears" probably won't be the last project they deliver together. Arianators and the XO Crew will be waiting!