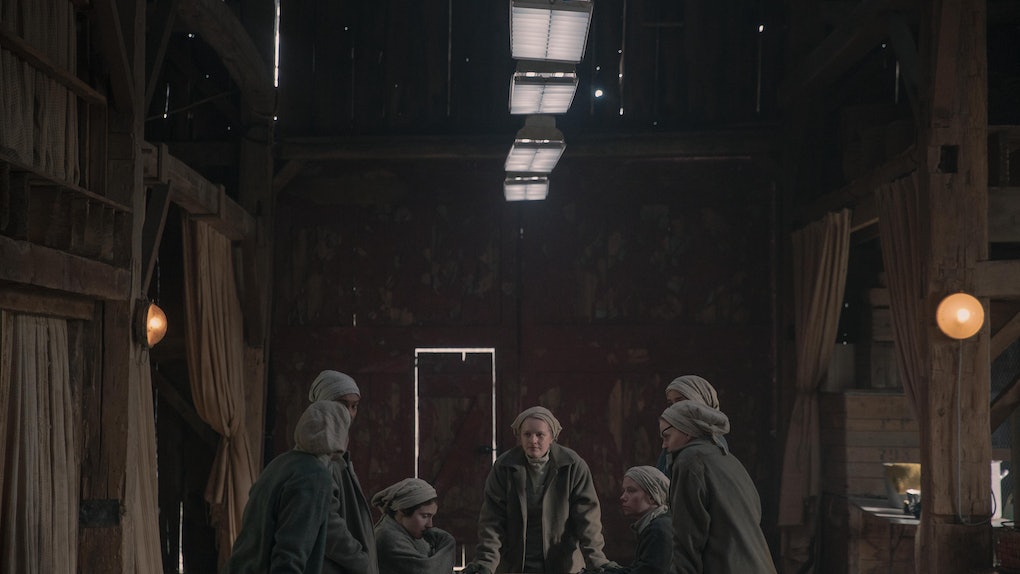 From the very beginning, The Handmaid's Tale has been about sisterhood. The series began with the patriarchy teaching women not to trust one another. But as June has discovered, when women break down those divisions, they're stronger together. By Season 4, June had built a found family of sisters: Janine, Alma, Brianna, and Dolores, all of whom were Handmaids like her, looking for freedom. But the road to getting out of Gilead isn't easy, and more than a few have already died trying to escape — and the tweets about the train scene in The Handmaid's Tale show the series isn't about to let anyone forget the cost.

Warning: Spoilers for The Handmaid's Tale Season 4, Episodes 1 through 3 follow. June nearly died at the end of Season 3. But it was her crew of friends who, at the risk of their own lives, found her, lifted her up, and carried her to safety. Season 4 opened with June spending a couple of weeks getting back on her feet while all of them hid at a farm, disguised as Marthas. But without June's driving force, the women were already falling back into old patterns. Perhaps they can stay here and stop running, they thought.

But June was never going to let that happen, and it wasn't long before she began taking risks again, killing Guardians and Commanders. By the time Episode 3 arrived, she'd been caught, although her friends escaped. June tried not to give up their location to Gilead officials, but the threat of her daughter, Hannah, being harmed led her to cave. By the end of the episode, the whole group was back under Lydia's thumb, in a van bound for a Magdalene Colony.

But then a disturbance outside the van distracted Lydia and the Guardians while their van was stuck waiting for an oncoming train to pass. In desperation, the girls made a break for it. But only June and Janine made it across the tracks. As they were running from a Guardian's bullets, Alma, Brianna, and Dolores were struck by the train and killed.

Episode 3's final scene was doubly hard for people who caught the episodes right when they arrived on Hulu. Three hours of The Handmaid's Tale, and *this* was the moment to end it on and go to bed?

But not everyone was willing to grieve and let go. After three seasons of June leaving a trail of destruction from her choices, some people were done with her after seeing most of the Handmaid crew die.

Hopefully, Janine will survive. At least she and June are on the road together, hopefully heading somewhere safe.

The Handmaid's Tale Season 4 continues with one episode a week every Wednesday on Hulu.