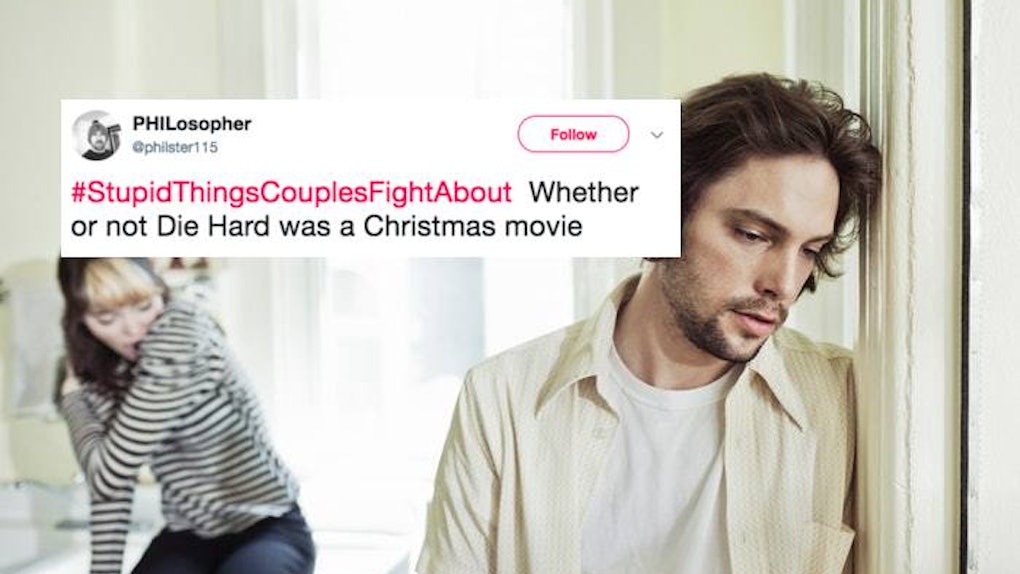 One of the biggest fights my boyfriend and I ever got in was over avocado. We were on a double date with some friends, and there was a piece of avocado from my plate that had fallen onto his seat while he used the bathroom. Long story short, he sat in the avocado, and I didn't warn him. Thus began a huge fight about why I wouldn't warn him he was about to sit in avocado. As you can see by that example, couples fight about dumb things all the time, and below, these tweets about the stupid things couples fight about just prove my point even more.

On Sunday, Jan. 21, the hashtag #StupidThingsCouplesFightAbout began trending on Twitter, and people went off. Oh, man, you guys, I'm serious. People delivered big time. You see, sometimes, I worry that my boyfriend and I are the only ones who get into these dumb fights about silly things. But based on these tweets, it seems pretty clear we're not the only ones who fight over the dumbest "problems" imaginable.

Read along with these dumb fights and prepare to feel very normal.

Die Hard is a huge source of contention for some couples, you guys. IS IT A CHRISTMAS MOVIE OR NOT?

All of the power lies in the hands of the one with the remote.

Don't you love when you and your partner are both convinced you're the better driver?

There is only one right way to put toilet paper back on the roll, people.

TBH, toilet paper seems to be a big issue in general.

For the love of God, please put the toilet seat down.

A classic Ross and Rachel fight: Were they on a break or weren't they?

I don't know about you, but if someone wrongs me in a dream, you better believe I'm gonna wake up mad at them.

What kind of monster takes the trash out without replacing the bag?

You've never been truly tortured until you've slept with a loud breather.

How dare you leave the toothpaste without the cap on?

Don't even think about touching my leftovers.

Deleting your shows is an act of pure evil.

TBH, asking your partner how you look in your outfit is almost always a losing battle.

Watching shows without you is an unacceptable act of treason.

What better topic to fight about than... fighting?

They can't agree on how to load the dishwasher.

There's more room for interpretation in a grocery list than you'd expect.

Money is a source of contention for pretty much everyone.

What's done is not done as far as some people are concerned.

Excuse me? That's my side of the bed, thank you.

Checking out other girls in front of you is a recipe for a fight.

What constitutes as a good pizza topping is not an objective truth.

But, as I said earlier, the best part of reading these tweets really has got to be feeling a little better about yourself and a little more confident in your relationship! Rest assured you and your partner are not the only ones getting into fights about dumb, silly things. Everyone is. In fact, I would go so far as to say those people who aren't fighting about dumb things are the ones living outside the norm.