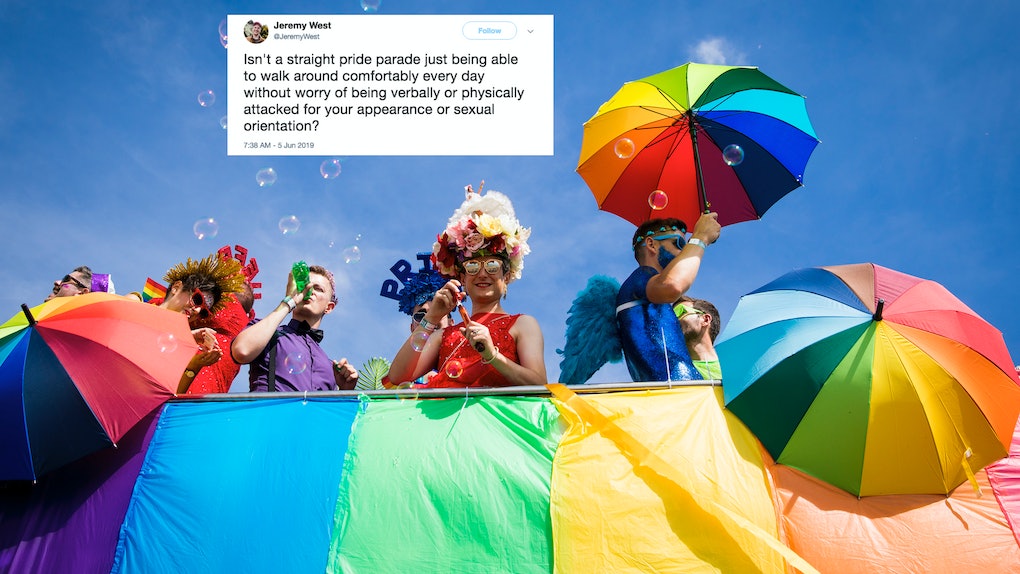 June marks Pride month, a time where people all across the world come together to celebrate the LGBTQ+ community. During this month, cities all across globe host historic Pride parades, but one particular city may host an event that isn't being so well-received by the public. Just take a look at these tweets about the "Straight Pride Parade" in Boston and see for yourself.

On Tuesday, June 4, the internet essentially blew up when news surfaced that four men in Boston, Massachusetts, proposed holding a straight parade in response to the LGBTQIA+ community's Pride parades. The parade idea was introduced by a group titled "Super Happy Fun America," whose mission is apparently to "create spaces for people of all identities to embrace the vibrancy of the straight community." However, the group's members raise some eyebrows. According to The Daily Beast, the group's founder is Kyle “Based Stickman” Chapman, a far-right activist. In addition, parade organizer Mark Sahady is also reportedly known for taking part in far-right conservative events in the Boston area.

According to The Daily Beast, Sahady claims the group has received permits for the event that's reportedly supposed to take place on Aug. 31. Even though this group of men may be looking forward to the event, there are many who are not. Once news got out that a straight pride parade was in the works, people on Twitter immediately started voicing their opposition to the event, including some notable celebrities.

Even though the Pride parades are festive events full of bright colors, great outfits, and loud music, they represent a bigger message. These marches symbolize decades of oppression, mistreatment, and inequality LGBTQIA+ individuals have faced throughout history. In the 1950s, there were police-enforced anti-gay laws that resulted in many raids within LGBTQIA+ safe spaces, such as bars. Same-sex marriage wasn't legalized in the United States until June 2015, and even now, couples are still facing discrimination concerning marriage licenses and wedding preparations.

While some strides have been made to enforce equality for all people, there's still a lot of work to be done. Conversion therapy, a procedure that is performed to try and change a person's sexual orientation or gender identity, is still legal in 33 states.

The LGBTQIA+ community has also been subject to numerous hate crimes and tragedies. In June 2016, an armed gunman opened fire at Pulse Nightclub, a known gay bar, in Orlando, Florida. The Pulse Nightclub incident was one of the deadliest mass shootings in United States history, killing 49 people and leaving more than 50 injured.

The Trump administration has also introduced proposals that seriously impact LGBTQIA+ individuals' rights. On April 12, a ban went into effect that prohibits transgender people from serving in the military. In addition, the Trump administration announced on May 22 a new U.S. Department of Housing and Urban Development (HUD) proposal that would allow homeless shelters to turn transgender people away at the door. Elite Daily reached out to the White House and HUD for comment on the new proposal at the time, but did not receive a response.

Clearly, the rest of the public isn't on board with the idea of a straight pride parade, so it'll be interesting to see how it unfolds if it actually takes place. In the meantime, take time to support your LGBTQIA+ friends and family. This is their time, after all.