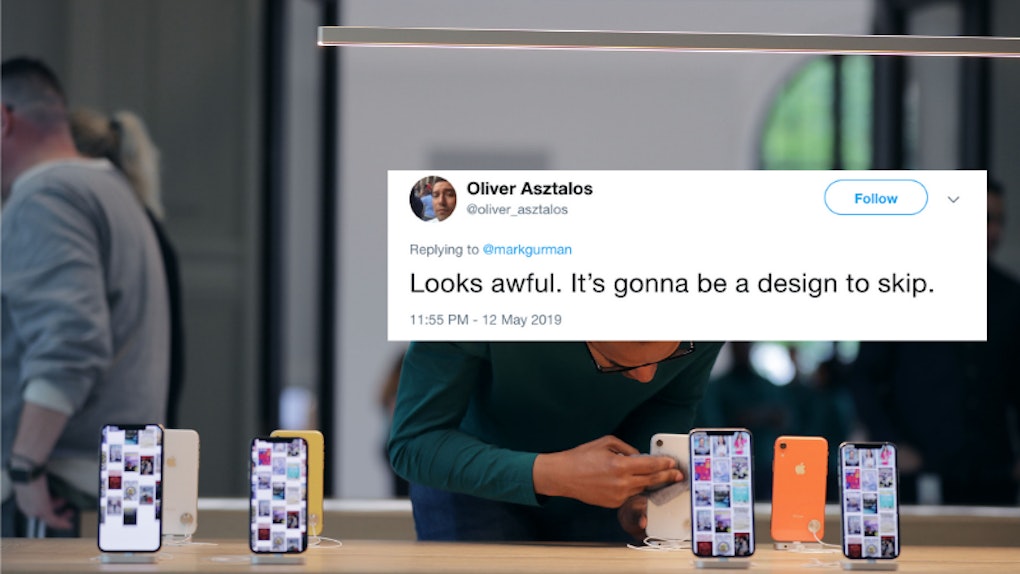 Technology never sleeps, everyone. Shortly after two new photos leaked that appear to confirm that the newest generation of Apple's iPhone will look very different than its predecessors, users are weighing in on the reported makeover. On Sunday, May 13, new images made their way online, appearing to corroborate earlier claims that the tech giant would be debuting a triple-lens camera on its 2019 iPhone. It appears to signal a big departure from the Apple iPhone setup users have come to know and love, and these tweets about the iPhone 11's reported design makeover are not happy about the camera aesthetics of the update. Elite Daily reached out to Apple for comment on the reported redesign, but did not hear back by the time of publication.

While the highly anticipated drop of the iPhone 11 is still months away, speculation has been swirling about the smartphone's new features as well as any potential redesigns on the phone's body — and one reported change is throwing Apple faithfuls for a loop. While iOS users have come to expect improvements in camera quality with each new generation of iPhones — after all, last year's iPhone XS featured a new dual-camera system — the company's latest bulky redesign is dividing customers.

On May 13, two new images leaked that appeared to show that the next iPhone will have a rear-facing square camera layout with three different cameras housed in a slightly raised box. It's a far cry from the small, pill-shaped camera setup that customers have come to expect.

Bloomberg reporter Mark Gurman shared the leaked renderings on Monday, writing, "Alleged next iPhone case moldings show what we discussed in our story last week in terms of new cameras. 3 on the high end, 2 on the new XR. Plus all models apparently getting a square, at least based on this one mold floating around."

Apple customers are weighing in on the new look, and it's safe to say that people are not here for the redesign.

While the iPhone 11 makeover might be controversial aesthetics-wise, it sounds like the updated functionality could make it all worth it. Gurman previously reported that the third lens on the camera will have an ultra-wide-angle so that users can capture a broader range with the zoom feature. With the wide-angle capabilities, the phone will reportedly allow users to adjust the framing to show people and other subjects who've accidentally been cut out of the frame, according to Tom's Guide. In addition, all three of the cameras are rumored to have augmented reality capabilities, per Mac Rumors, which could be an exciting new feature from the tech company. So, while you might not be the biggest fan of the iPhone 11's exterior at first, it sounds like the increased photo-taking capability of your phone should make it well worth it.

TBH, I wouldn't be surprised if the camera box ends up being less polarizing in real life, as other rumors suggest that Apple will apply a black coating to help the camera setup blend more into its surroundings. And, whether or not you like Apple, the company has a track record of making the sleek aesthetics of its gadgets a priority, and other leaks seem to suggest that the next generation of iPhones will be no different. In addition to the new camera design, more leaked images from tech site MacOtakara appear to suggest that the successor to the iPhone XR will be coming in lavender and bright green.

Again, we'll have to wait until the release of the iPhone 11 to officially confirm these redesign rumors, so in the meantime, I'd take all leaks with a grain of salt.