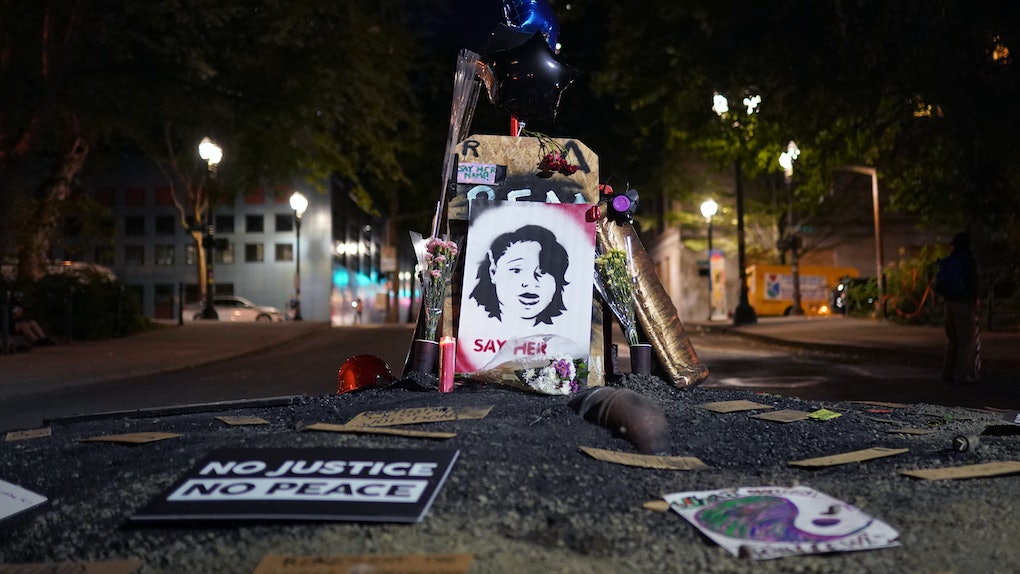 After six months of raised tensions and nearly 100 days of protests in Louisville, Kentucky, charges against one of three officers involved in Breonna Taylor’s fatal March 13 shooting have been filed. On Sept. 23, former detective Brett Hankison was indicted by a grand jury on three counts of first-degree wanton endangerment, reported The Courier Journal. A representative of Hankison did not immediately respond to Elite Daily's request for comment on the charges filed against him. In light of these charges, many people have taken to Twitter to voice their concerns about how this indictment fails to serve justice to Breonna Taylor — and these tweets about the charges filed in Breonna Taylor's case make quite a point.

Taylor, a Black woman, was fatally shot by plainclothes police officers in her own home during a misdirected late night “no-knock” raid back in March of this year. But despite the fact that Taylor was a civilian, not suspected of any crime, and resting peacefully in her own home when she was killed by police, charges were only filed after months of protests and activism. Now that the charges have come out, many have expressed a grave concern that only one officer was charged, and that the charges themselves have nothing to do with Taylor's actual death.

The grand jury’s official indictment does not directly cite Hankison for Taylor’s death. Rather, the “wanton endangerment” charges indict Hankison for firing his weapon into neighboring apartment units, putting Taylor's neighbors at risk. The charge, a Class D felony, carries a maximum sentence of five years behind bars per count. While a warrant has been issued for his arrest with a bond set at $15,000, the other two officers undergoing FBI investigation, Sgt. Jonathan Mattingly and Det. Myles Cosgrove, were not charged.

The announcement prompted a rush of anger, sadness, and frustration across the country as protests against racism and police violence continue to grow.

According to Kentucky Attorney General Daniel Cameron, a ballistics analysis concluded that Cosgrove, also a subject in the investigation, had fired the shot that killed Taylor. Cameron said in a live CBSN report that the investigation had found that Cosgrove and Mattingly had been "justified in their use of force," however. “Detective Hankison fired his weapon a total of ten times,” Cameron said. “Some bullets traveled through Apartment Four and into Apartment Three."

The city of Louisville has paid Taylor's family a $12 million settlement in a wrongful death lawsuit, and the Louisville Metro Police Department (LMPD) has begun an internal investigation into six officers involved in the raid. But activists and advocates are outraged by the lack of police accountability, and protests began almost immediately after the charges were announced.

Louisville Mayor Greg Fischer declared a state of emergency in the city in light of the announcement, while the LMPD also made preparations downtown for extreme social unrest and protests — setting city-wide curfews, establishing barricades, and calling in the National Guard for backup.