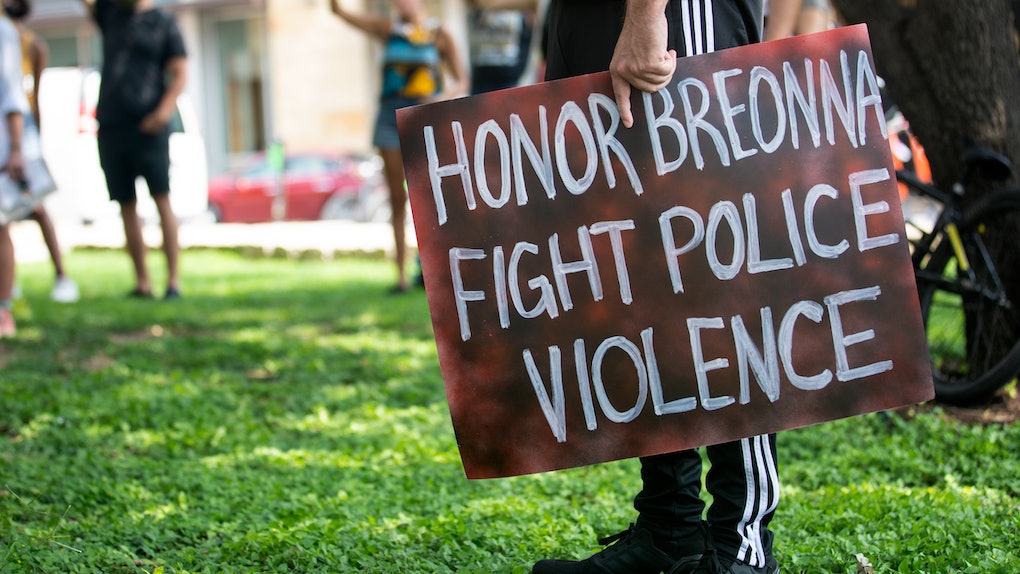 An Officer Has Been Charged In Breonna Taylor's Case, Over 6 Months Later

As public unrest over the police-involved shooting of Breonna Taylor continues to grow, charges have finally been filed in the case of Breonna Taylor’s death. On Sept. 23, a grand jury indicted former detective Brett Hankison on three counts of first-degree wanton endangerment, according to The Courier Journal. A representative for Hankison did not immediately respond to Elite Daily’s request for comment. The charge, a class D felony, carries a potential sentence of one to five years in prison for each count.

Hankison, one of the plainclothes officers involved in the raid that killed Taylor, was charged with “wantonly” firing a gun into three apartments during the raid, per The Courier Journal. None of the apartments cited appeared to be Taylor's. A warrant has been issued for Hankison's arrest, and a bond of $15,000 has been set. Two other officers under investigation — Sgt. Jonathan Mattingly and Det. Myles Cosgrove — were not charged. The three officers involved had all fired shots during the raid on Taylor’s home.

The charges come more than six months after Taylor’s death. On March 13, Taylor was killed in her own home during a “no-knock” raid by police officers searching for a suspect in a drug case, who did not live at Taylor’s address. Taylor, a Black woman, was shot eight times by plainclothes officers. Taylor’s death is one of a number of high-profile police killings of Black people in recent months that have catalyzed protests across the nation calling for an end to excessive police violence against minority populations. The deaths of Black people including George Floyd, Ahmaud Arbery, and many more at the hands of police have prompted a resurgence in national protests against racism and police brutality. Taylor’s case has drawn specific attention due to underreporting of violence against Black women, as well as the fact that initially, the officers involved faced no consequences. The FBI investigation was announced on May 21.

As of Sept. 21, six Louisville officers are undergoing internal investigation after Breonna Taylor’s death, according to ABC News. LMPD spokesperson Sgt. Lamont Washington confirmed to Elite Daily that as of Sept. 21, the LMPD’s Professional Standards Unit is evaluating Cosgrove and Mattingly, as well as Det. Joshua Jaynes, Det. Tony James, Det. Michael Campbell, and Det. Michael Nobles for their involvement in Taylor’s death. Hankison was fired in June for “extreme violations” of the LMPD’s policies during the March 13 shooting, and had a previous history of misconduct with the department, according to a termination letter from Chief of Police Robert J. Schroeder. The officers are being evaluated for any violations of internal policies during the fatal raid on Taylor’s home. This investigation began after the FBI began examining the incident for potential civil rights violations by the police officers involved in the fatal shooting of the 26-year-old EMT. However, LMPD’s internal evaluation may only result in disciplinary action such as written reprimand or termination.

As the city anxiously awaited the attorney general’s announcement, Louisville Mayor Greg Fischer preemptively declared a state of emergency in preparation for more protests and possible unrest. “We do not know when the announcement will come, but we must prepare for it,” Mayor Fischer wrote in a tweet on Tuesday morning. “Our goal is ensuring space and opportunity for potential protesters to gather and express their First Amendment rights after the announcement. At the same time, we are preparing for any eventuality to keep everyone safe.”

According to a Tuesday news release, the LMPD plans to quell any potential unrest by barricading the perimeter of Louisville’s downtown area, as well as Jefferson Square Park. Protesters have gathered in these locations over the last few months for a total of 118 days to demand action from both state legislatures and city officials. LMPD is preparing to restrict vehicle traffic downtown, and is limiting access to multiple parking garages. Only pedestrians will be allowed within the blocks of Jefferson Square Park.

“We recognize that this is an inconvenience, and will cause difficulty for those that live, work and have business downtown, and we apologize,” said the department. “However, public safety is our number one priority, and it would be irresponsible if we did not take preemptive action to preserve it.”