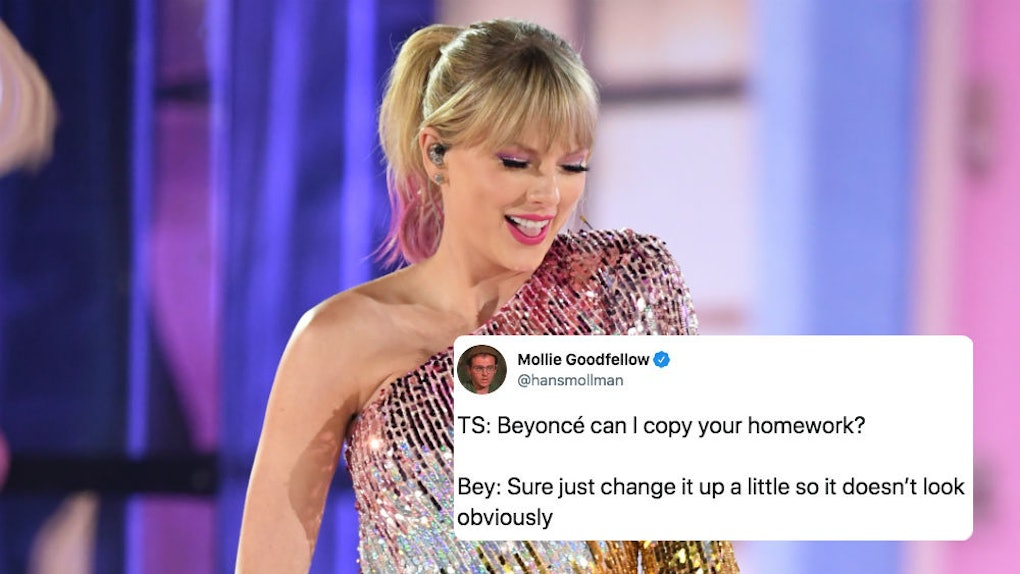 These Tweets About Taylor Swift's "ME!" Drumline At The BBMAs Accuse Her Of Copying Beyonce

In case you missed it, Taylor Swift opened the Billboard Music Awards last night with her new song "ME!" She hit the stage with Brendon Urie of Panic! at the Disco — who sailed in holding an umbrella like he was Mary Poppins — and the two of them danced and sang as they paraded around a pastel universe filled with rainbows, hearts, and butterflies. It was all very glittery and sweet, but that didn't stop fans from dragging the pop star for kicking her performance off with a drumline before strutting on stage and striking a pose — which is exactly what Beyoncé did during her iconic "Homecoming" performance at Coachella. The tweets about Taylor Swift's "ME!" drumline at the BBMAs are pretty intense, y'all. I mean, the Bey Hive is calling the production #Mayochella — and the kind of hilarious hashtag is now trending on Twitter because of course it is.

Fans didn't waste any time rolling up to Twitter during TayTay's performance to go in big on the artist, accusing her of ripping off Queen Bey.

"I don’t know if y’all are seeing this but Taylor Swift is gentrifying Beyoncé's Coachella performance right now," added another.

And from a third: "Taylor, imma let you finish, but Beyoncé had the best drum line of all time."

Let's take a look at some more of these tweets, shall we?

OK, some of these tweets are really funny. But honestly, maybe a little unfair. Why do so many fans seem intent on pitting these two incredibly talents artists against each other? Taylor and Beyoncé are both straight-up queens in my book. Are aspects of the performances similar? Sure. But, to be fair, drum lines in performances aren't exactly a novel idea. For example, Gwen Stefani did it way back in 2004 with "Hollaback Girl."

Here she is performing it with a drumline on The David Letterman Show:

Anyway, it was only a matter of time before Swifties started stepping in to defend TS and her performance.

"Girl, it’s drums," one wrote. "Beyoncé wasn’t the first to use drums in a performance and Taylor definitely isn’t either. Beyoncé had a whole as band and Taylor had just drums. Y’all need to stop comparing the most general things just because you don’t like Taylor."

"I can’t believe that twitter has gotten to the point where people are comparing Beyoncé and Taylor’s drum lines," added another. "So Taylor used drums, lots of people do big whoop.. I love Bey but this really isn’t THAT big of a deal."

For the record, I love when artists use marching bands in their performances.

So, feast your eyes on Taylor's performance with Brendon Urie, which you should totally watch ASAP, because despite all the drama, it was actually dope AF:

And then head over to Netflix to watch Homecoming! Because two drumline performances are better than one!