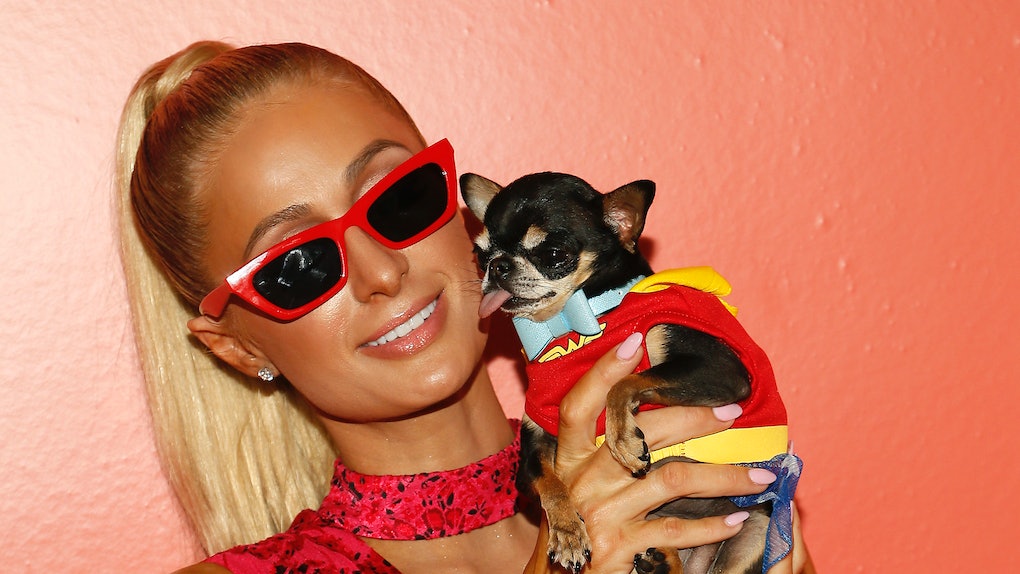 These Tweets About Spotting Celebrities With Their Dogs Are So Relatable

I'll be the first to say that many of us probably don't relate to Hollywood's biggest stars on most levels — and I'm not one to buy into the whole "celebrities, they're just like us" line — I will admit that the lines definitely blur when it comes to the universal love of dogs. Some A-list fur parents' pups are almost just as well-known as they are, and TBH, you'd probably catch me unabashedly fangirling over a celebrity's dog before realizing who they were with. It turns out that I'm not alone, because these tweets about spotting celebrities with their dogs and getting distracted by their canine companions are actually so relatable.

Judging by the Sept. 28 Twitter thread, the conversation started on Saturday evening when Twitter user @AlannaBennett revealed that shockingly enough, she'd almost completely bypassed the fact that she'd met Tessa Thompson while being distracted meeting the Men In Black: International actress' dog, who is named Josie the Maltipoo, per an August 2018 interview with The Cut.

The Twitter user detailed the experience on the social media platform, writing, "I just GASPED at a dog who walked into a cafe because the dog was REAL CUTE. Then the person walking the dog turned around and it was Tessa Thompson and now I feel bad."

Addressing the star, she continued, "Sorry Tessa, big fan, you looked great, but I respect your coffee shop time, sorry if u felt gasped-at."

While Bennett detailed her apparent faux-pas, it turns out that she's not the only one who's experienced a similar situation and accidentally almost passed up a celebrity due to their head-turning pup. At the time of publication, her tweet had 2,000 retweets and 36,000 likes, revealing just how relatable this situation really is.

One user @KellyHevel recounted, "Did that with Ethan Hawke. In fact I didn’t see him at all. When I pointed out the dog my friend said 'did you not see the dog was attached to Ethan Hawke?'"

It turns out that whether you're an Oscar-winning star like Robin Williams, Leonardo DiCaprio, or Anne Hathaway; a famed singer like John Legend or Lady Gaga; one of the most recognizable names in TV like Nick Offerman or Kerry Washington; or a well-known celebrity couple like Mila Kunis and Ashton Kutcher; it doesn’t matter. According to the many comments in the thread, many dog-lovers admit to noticing these stars' pups first before realizing who was attached to the other side of the leash.

Only head-turning French bulldogs could steal your attention away from Lady Gaga.

Orlando Bloom fans were distracted by his pup as he was relegated to "lord of the leash." (LOL.)

I bet you didn't know Rachel McAdams' dogs are "like, really pretty."

Even the greats take a back seat to their adorable doggos.

Pups on a hike are truly the cutest.

Of course Jake Gyllenhall has "a real cute dog!"

OK, my new life goal is to "puppysit" Olivia Pope's dog during a bathroom break.

Even Leo's dog can distract us mere mortals.

Being laughed it is probably the best-case scenario? I'd take it.

TBH, I'm sure Juliette Lewis has gotten that greeting for her pup plenty of times.

Some commenters revealed that in fact, the opposite had happened to them where a celebrity wanted to pet their dog. Seriously, even super famous celebs like Jeff Goldblum will stop to pet your adorable dog.

I really hope this dog owner tried to barter a song for a pet.

Bennett summed up the thread in one follow-up tweet on Sunday, Sept. 29, writing, "It tickles me just HOW many of you have done this exact thing to celebrities, dogs are amazing."

More like this
The 25 Sexiest Comments Made By Celebrities On Their Partners' Instagrams
By Corinne Sullivan
Why Don't I Have TikTok's "Celebrity" Shapeshifting Filter? It Depends On This 1 Thing
By Lara Walsh
These Tweets About The Derek Chauvin Trial Verdict Are Full Of Shock
By Rhyma Castillo
Stay up to date