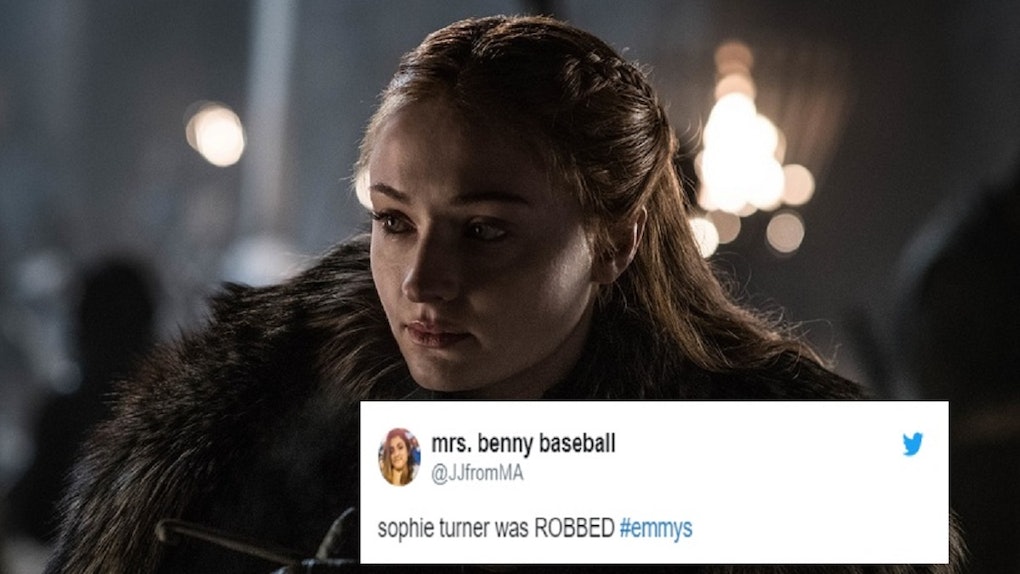 These Tweets About Sophie Turner's 2019 Emmys Snub Are A LOT

Game of Thrones fans may never be satisfied with the outcome of the battle for the Iron Throne, but the Television Academy definitely found it worth celebrating. The eighth and final season of the HBO fantasy drama received a record-breaking total of 32 Emmy nominations, including Sophie Turner's first acting nomination. However, a win wasn't in the cards for her, and tweets about Sophie Turner's 2019 Emmy snub capture a ton of emotions.

Playing Sansa Stark for the entire duration of the series, Turner was nominated for Outstanding Supporting Actress in a Drama alongside her Game of Thrones co-stars Gwendoline Christie, Lena Headey, and Maisie Williams. Ozark's Julia Garner and Fiona Shaw of Killing Eve were also recognized in the category. When nominations were announced in July 2019, Turner wrote in an Instagram story, "I’m beyond humbled. I truly never thought that this would ever happen. This is the best farewell to the show that has been my life for the past 10 years."

Although fans criticized Season 8 of Game of Thrones for flawed character development and anti-climatic plots, Sansa's storyline was recognized as one of its highlights. Refusing to recognize her brother as a king, the eldest Stark sister declared the North a free kingdom and became the Queen there, living out a childhood dream that the character detailed early in the series. She may not be real-life royalty, but Turner and her tea-spilling tidbits definitely make Sansa stans proud onscreen and off.

Heading into Sept. 22's Primetime Emmys ceremony, Game of Thrones had already won eight of its nominations at the previous weekend's Creative Arts Emmy Awards. After shining on the red carpet in a light pink dress, Turner was seen catching up with co-stars like Kit Harington and Emilia Clarke. While Game of Thrones winning several awards seemed inevitable, Turner's win felt less guaranteed, especially since she shared a category with so many acclaimed co-stars. It was an even bigger surprise when fellow first-time nominee Garner won the Emmy for her work in Ozark, sparking plenty of tweets in support of Turner and the other Game of Thrones ladies.

Although Turner didn't hit the stage as a winner, she appeared onstage with the rest of her fellow Game of Thrones nominees following a commemorative video package about the beloved drama series. "I think all of us agree how amazing the entire last season was for us," Turner said during the segment.

Fans are still in disagreement about how Season 8 of Game of Thrones handled its ending, but it looks like the one thing they can agree on is Turner deserving plenty of praise at the 2019 Emmys. Thronies might have to wait quite some time to see her at the Emmy Awards as a nominee again. But as they saw on Game of Thrones, the pack survived, and Turner is here to spill any future tea about Sansa Stark for hardcore fans.