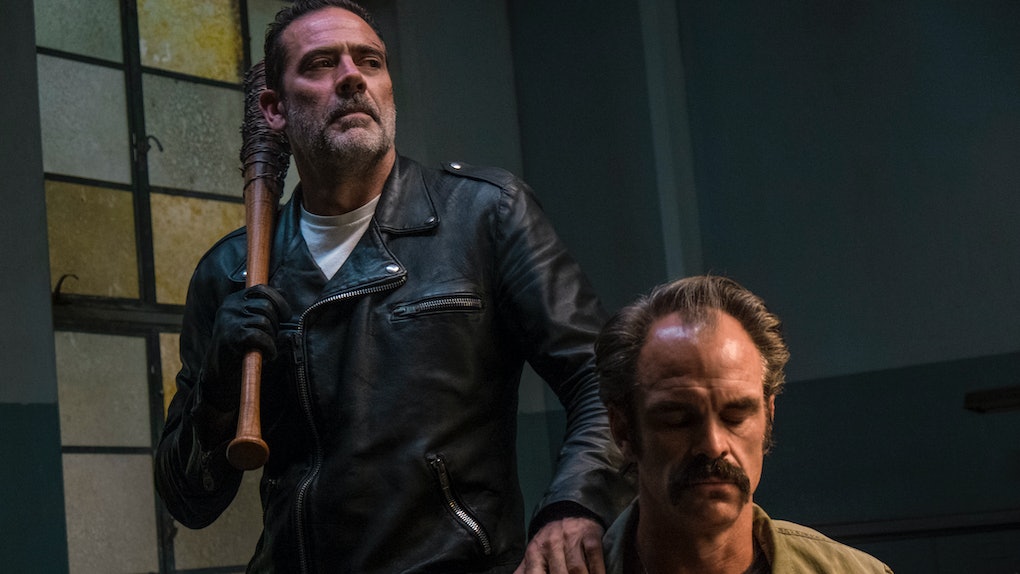 In tonight's Season 8 Episode 15 installment of The Walking Dead we saw one of the most significant (and long-awaited) deaths to date. After learning that Simon was working behind his back, Negan showed all of the Saviors what will happen to you if you try to cross him — you will suffer. Negan wound up killing Simon for his betrayal, and the reactionary tweets about Simon's death prove that this was a long time coming.

Simon definitely hasn't been making the smartest decisions when it comes to Negan this season. He's been so power-hungry and in need to take over the top spot of the Saviors that he lost sight of what his decisions might do once they come to light. Negan has a temper, and he wants full control of the Sanctuary and his followers. So when someone crosses him or does something against his wishes, Negan retaliates. Hard.

Back in Episode 10, Simon was ordered to come to an agreement with Jadis and the Scavengers. But instead, he went behind Negan's back and killed all of the Scavengers (except Jadis), and lied to Negan about what he had done when he returned to the Sanctuary.

And that, ladies and gentlemen, was the final nail in Simon's self-inflicted coffin. Negan fully realized just how badly Simon wants to take his place as the Saviors' all-mighty leader, and suggested that the two fight for the spot. This fight to the death ended with Negan brutally knocking out Simon and ultimately concluded when Negan strangled Simon to his death. It looked seriously painful, but in Negan's eyes this death was deserved.

And everyone on Twitter pretty much knew that Simon's death was inevitable.

Even better? We found out that Simon's ultimate fate wasn't over. Simon ended up serving the Saviors even in death, as a zombie tacked to the outside fence of the Sanctuary.

Negan can't afford to have anyone in his way right now. This "All Out War" season is about to come to a head, and Negan is on a mission to take all of the Alexandrians out — once and for all.

The fact that he killed Simon will definitely help him in this mission. Negan used this betrayal and showed the rest of the Saviors that if you cross him, you're as good as dead. I don't understand why Simon thought that he'd get away with his agenda of becoming the dead honcho of the Saviors. Does he think Negan is a complete idiot? Negan is calculated and forceful, and Simon was definitely biting off more than he could chew.

What's more? Negan also figured out that Dwight has been working behind his back too. If you remember earlier in the season, Dwight decided to switch sides and play for the Alexandrian's team. Dwight has been acting as an informant of sorts for Rick and the Alexandrians, and is trying to take Negan down just as much as Simon tried to. Now that Negan knows what Dwight's been up to, he could be the next to go in the series finale.

Negan is not messing around here, people. No wonder he decided to kill Simon once he realized what his agenda was. Nobody is getting in Negan's way now. And if he has to kill his former right-hand man in from of everyone at the Sanctuary to display this, well then that's just what Negan's gonna do. Simon was his victim this week, and who knows who'll be on the chopping block in next week's finale. My guess is that there will be more than one.

More like this
These Tweets About Prince Philip's Death Will Break Royal Fans' Hearts
By Jonathan Borge
These Tweets About Jimmy Fallon's TikTok Dance Follow-Up Segment All Say It's Too Little, Too Late
By Brandy Robidoux
Who Did Emily Poison? 'The Handmaid's Tale' Season 2 Is Off To An Intense Start
By Ani Bundel
Stay up to date