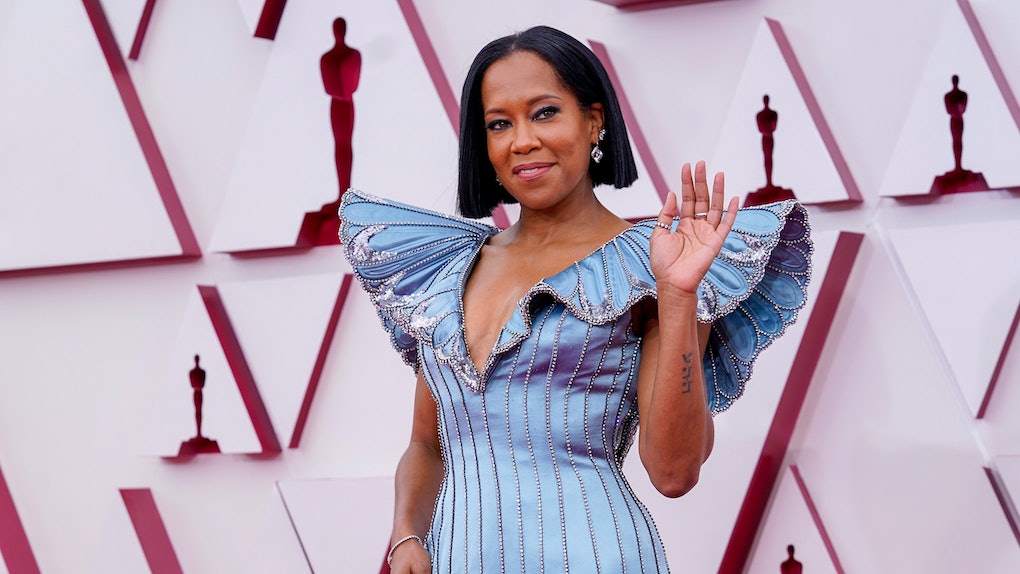 The Academy Awards looked very different this year, but even in the midst of a pandemic, Regina King still brought all the glamour, humor, and poise fans have come to expect of her in kicking the show off. After a cinematic intro following her onto the Union Station stage, King opened Hollywood's biggest night with a moving speech. These tweets about Regina King's 2021 Oscars opening are a testament to what a great job she did at the host-less event.

As has been the case for the past several ceremonies, the 2021 Oscars were held without a host. Instead, King opened the big night with a brief monologue, in which she spoke about the power of movies as well as making a statement about recent tragic events. "I have to be honest, if things had gone differently this past week in Minneapolis, I might have traded my heels for marching boots," King said, referring to the recently announced guilty verdict in Derek Chauvin's murder trial. "I know many of you want to reach for your remote when you feel Hollywood is preaching to you, but as the mother of a Black who fears for his safety, no fame or fortune changes that."

King's speech earned tons of praise from viewers, as did her sky-blue custom Louis Vuitton gown and her instantly iconic entrance. Fitting with the ceremony being classified as a movie set this year in order to comply with coronavirus prevention standards, the event kicked off with a faux opening credits, as the names of all the famous presenters appeared on screen while King strutted through Union Station.

King's opening was brief, but impactful. The actor and director pivoted to announcing the winners for the Best Original Screenplay award (which went to Emerald Fennell for Promising Young Woman) and the Best Adapted Screenplay Award (won by Christopher Hampton and Florian Zeller for The Father).

While King herself was not nominated for Best Director this year for her directorial debut, One Night in Miami..., the historical drama did receive three nominations at the 2021 ceremony.