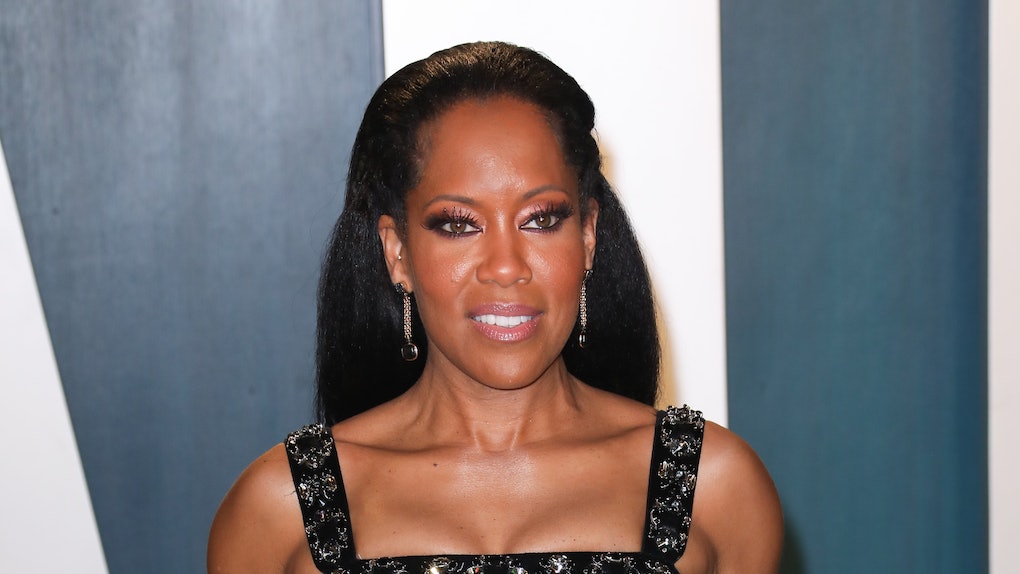 As she accepted the 72nd Annual Primetime Emmy Award for Lead Actress in a Limited Series/Movie for Watchmen, Regina King made an enormous statement in more ways than one. The one thing no one can stop talking about? King's Breonna Taylor shirt. Aside from being "pictured" on a "virtual" carpet in a stunning blue Schiaparelli gown, King was then pictured in an armchair wearing a fuchsia Schiaparelli suit worn over a black t-shirt with Breonna Taylor's image and the text "Say Her Name." As evidenced by these tweets about King's Breonna Taylor shirt, people were all for this display of support.

Before the long-awaited ~virtual~ Emmy Awards, photos of King wearing a gorgeous cerulean blue, sculptural Schiaparelli gown circulated. The dress, with a billowing high-low skirt and an enormous cloud of fabric extending up behind her, was covered in gem appliqués. Later, she appeared in a sleek pink blazer with Breonna Taylor's face peeking through. As she accepted her first Emmy of the night, King's shirt, combined with a thoughtful acceptance speech, made a lasting statement that clearly resonated with many on Twitter.

Aside from her homage to Taylor, King's speech was filled with must-listens, like her emphasis on the utter importance of voting in every election, but particularly on Nov. 3, and her ending "rest in power" to Supreme Court Justice Ruth Bader Ginsburg, who died at 87 on Sept. 18 from complications of pancreatic cancer.

King wasn't the only nominee and winner to wear a shirt paying tribute to Taylor. Accepting the award for Supporting Actress in a Limited Series/Movie for Mrs. America, actor Uzo Aduba, too, wore a black shirt with Breonna Taylor's name written in gold across the chest. Twitter swiftly erupted with similar praise.

More like this
The 2021 Met Gala Is Reportedly Still Happening
By Margaret Blatz
Amanda Gorman's 'Vogue' Cover Shows The Poet In Her Natural Form: A Goddess
By Margaret Blatz
These Black-Owned Depop Shops Feature The Coolest Must-Haves
By Theresa Massony
Stay up to date