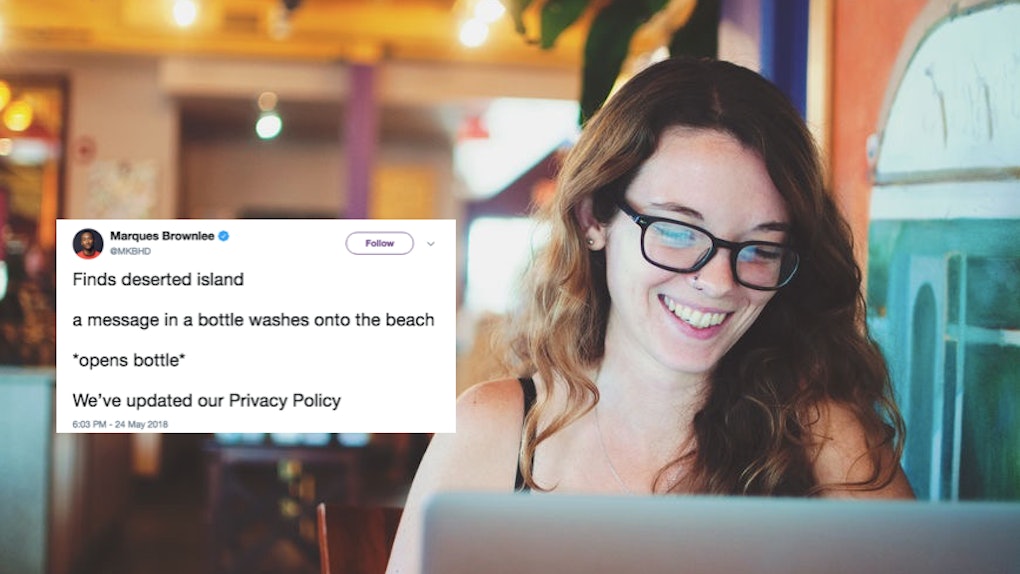 You're likely aware of the fact that data privacy has been a pretty hot topic in the news this past year, specifically in relation to questions over user data privacy on Facebook that arose earlier in 2018. But more recently, you've probably seen a slew of similar messages coming from any and every website you've ever used, that says, "We're updating our privacy policy." Honestly, there's a privacy policy update wherever you go in the cyber universe RN, and that's no exaggeration. So, in classic Twitter fashion, this monotonous and inescapable message has officially become a meme. If you haven't seen these tweets about privacy policy updates, they're ridiculously hilarious and are guaranteed to make your day.

It seriously feels like there's a privacy policy update everywhere you look right now and Twitter's getting a kick out of it. There are jokes about it appearing on deserted islands, popping out of your in-house kitchen appliances, and even becoming a sexual orientation within the latest and greatest "Straight, Gay, Bi" meme. The Twittersphere is really feeling like they can't run or hide from this seemingly-random privacy policy update RN, and what better way to handle it than making it into a meme? I swear there's no better way to approach this situation — memes definitely make everything a little better.

Others in the vast world of Twitter are feeling like their email is largely getting targeted by these inevitable privacy policy updates, from every account they've ever made. And honestly, I can relate. Seriously, my inbox has never been this full in my entire email-using life, and I'm getting emails for accounts I don't even remember making. All of this is a helluva lot to handle right now, and if having a ton of unopened mail in your inbox stresses you out, I totally feel you.

Some are joking that even their grandparents are getting affected by the updates. In reality, older generations most likely aren't getting half as many privacy policy updates as you are (unless they have every social media account known to man) so these are especially funny. I'm so here for all of the grandparents' privacy policy update jokes, y'all.

Many are taking this opportunity to update their own personal privacy policies. Broke up with your significant other? Your privacy policy has changed. And what about your friends? They'll get the same message. Since every single website is updating their privacy policies right now, it's important to let everyone know that you, too, are updating your own privacy policy.

And alas, some of Twitter is just really freaking confused. What is this this message? Why is it following me everywhere I go? These are just a few questions that some people are asking, and I feel all of you on a personal level. I'm sorry you're confused, but all of us going through this right now, just like you.

In case you're one of many who are super confused about these data policy updates, it's a response to a new European law called the General Data Protection Regulation (GDPR), which goes into effect on Friday, May 25. It's been labeled as "the toughest online privacy rules in the world" byThe New York Times, and although it's European, it also affects American internet users, as the internet is, in fact, the world wide web. The law is really just transparency-focused, stating that companies need your consent to use private data, and that they can't require you to provide data which isn't necessary for the company to operate. It's nice but doesn't require any action, and honestly, all of the updates are just getting to be overwhelming AF.

Anyway, these privacy policy updates are getting out of hand, and there's nowhere to hide from them. Hopefully they'll subside soon, but for now, I'll just be deleting every account I've ever made, while continuing to laugh at these memes. Don't mind me.