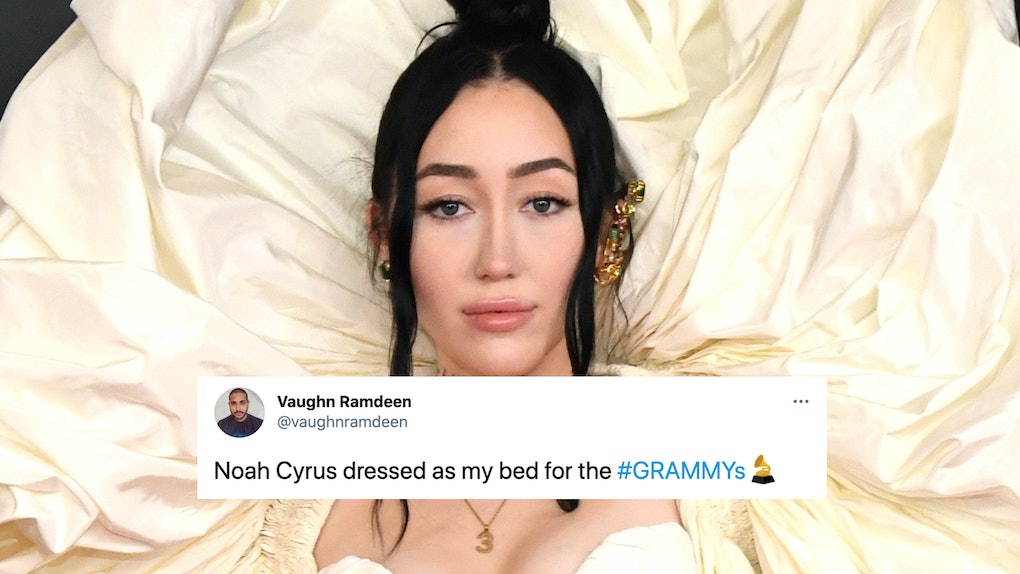 This is unconfirmed, but I have a strong hunch that, at the 63rd annual Grammy Awards, when Noah Cyrus debuted her 2021 Grammys dress, the entire nation collectively gasped... and maybe chuckled a little bit. And these tweets about Cyrus' Grammys look are all the proof you need. Of course, Cyrus absolutely stunned, looking gorgeous as ever. Needless to say, Twitter is aflame with praise and endless lighthearted jokes that Cyrus' dress looks a biiiiiiiit like some common household items.

On March 14, 2021, Cyrus, nominated for Best New Artist, slayed the carpet within seconds of walking it in a billowing, sculptural, comforter-esque Schiaparelli Couture gown. The voluminous gown, off-white in color, boasts a long, fitted silhouette with a strapless, sweetheart neckline. But behind the dress, draped over Cyrus' shoulders, is an enormous gathering of the same white fabric that forms an oversized halo around Cyrus' entire figure. All in all, it looks like Cyrus is surrounded by a glowing light like the angel she is. It also kiiiiiiind of looks like the most beautiful fitted sheet fresh out of the dryer, and I mean that with every ounce of love in my heart for this look.

Once they caught wind of the look, Twitter users were quick to comment on it. Some fan-girled. Some were locked and loaded with memes. All were positively blown away. (I mean, it is Schiaparelli, after all.) Most notably, though, several tweets drew striking comparisons between the dress and some other household items, like a tissue, a sheet, and the very down comforter you're probably wrapped up in right now. But I think everyone is in agreement that few people other than Cyrus could look so beautiful wearing this look.