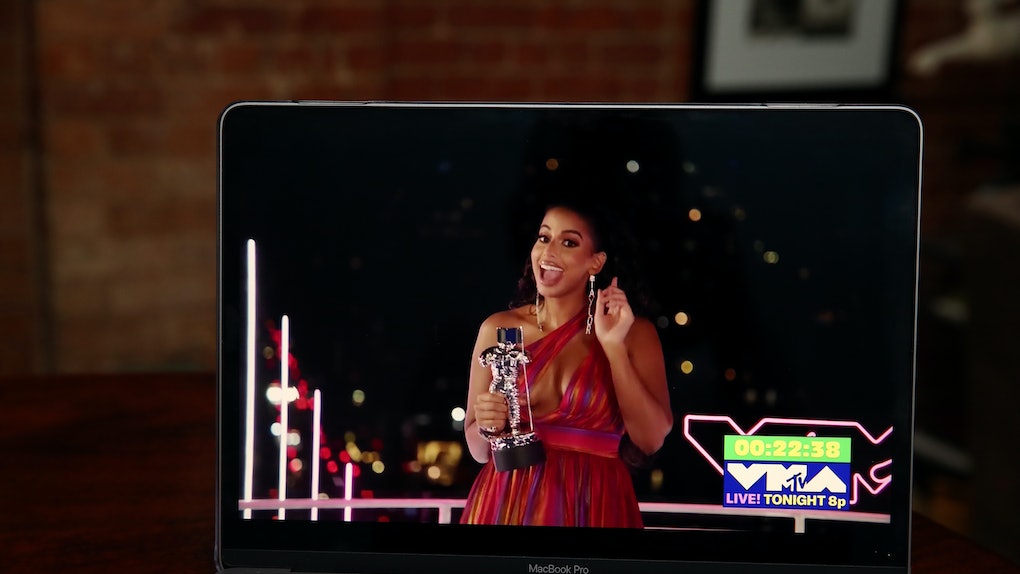 Although the 2020 MTV Video Music Awards couldn't take place as originally planned, the network made do given the ongoing coronavirus pandemic. One presenter taking the virtual stage during the VMAs pre-show was TV host and actor Nessa Diab, whose Breonna Taylor earrings sparked some mixed reactions among fans. Several viewers took to Twitter to voice both praise and concern once they realized Diab's earrings spelled out "Breonna Taylor." Elite Daily reached out to Diab's team for comment on the social media controversy and will update this post accordingly.

Diab's earrings feature 26-year-old Taylor's name in a jewel-encrusted, dangling silhouette. She posted a close-up look at the earrings in a photo of herself on Instagram, with the following caption:

It’s been a blessing to co-host the @MTV VMAs pre-show the past few years. I’m always beyond grateful. I also know this is not a usual year and I felt it was important to express that. The cops ( Jonathan Mattingly, Brett Hankison, and Myles Cosgrove) who murdered Breonna Taylor in her sleep STILL have not been brought to justice. Police violence continues to terrorize Black and Brown communities and it is pretty clear it’s not stopping anytime soon. Not a day goes by that I don’t think of this horrific reality. Today is no different, Black Lives Matter forever ❤️

The sentiment did not sit well with most. While Diab's intentions may have been to continue to shed light on Taylor's story, several people tweeted in opposition of the move; many made the point that putting Taylor's name on a pair of earrings is on par with people turning her name into a meme and merch, thus aligning her with a trend rather than an individual senselessly killed at the hands of police.

Others voiced a different opinion, with some viewing Diab's earrings as a small way to keep Taylor's name and story top of mind for viewers. Some Twitter users viewed the earrings as a subtle form of protest, while others simply didn't see an issue.

Taylor's tragic death occurred on March 13, 2020, in Louisville, Kentucky, where police forcefully entered Taylor's apartment as she and her boyfriend slept. Police obtained a search warrant as part of a narcotics investigation; the suspect police were investigating lived nowhere near Taylor, but police claimed they had reason to believe the suspect had packages sent to Taylor's home, per The New York Times. After police entered the apartment, Taylor and her boyfriend woke up from the noise, and following a confrontation, police fired several shots, killing Taylor. The officers involved in Taylor's death have still not been arrested.