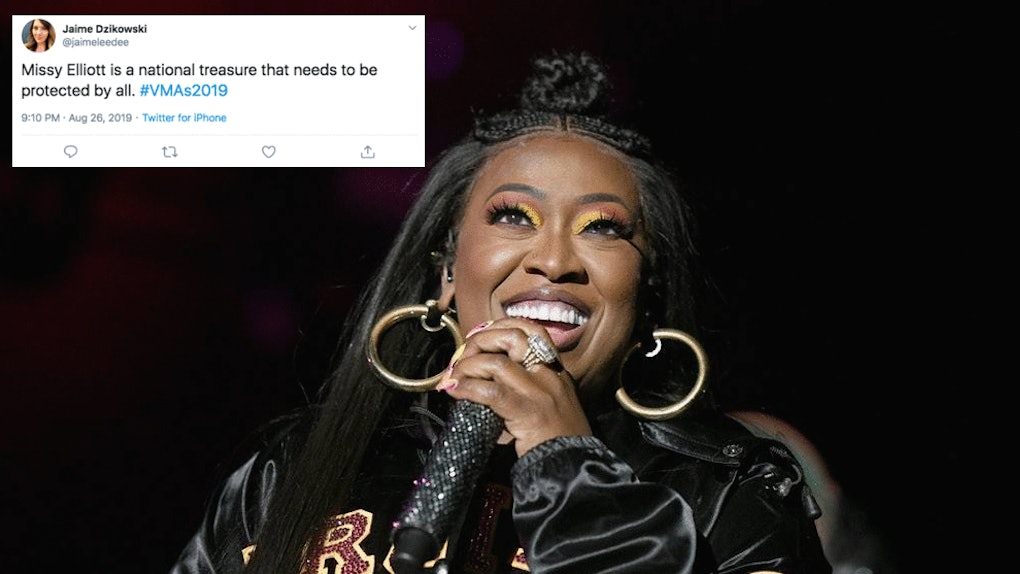 Missy Elliott is singing "Is is worth it? Let me work it" tonight as she accepts the Video Vanguard Award at the 2019 VMAs — and I, for one, feel like I've waited my whole life for this moment. The legendary female rapper took the stage to perform a medley of her greatest hits before being honored, and these tweets about Missy Elliott's 2019 VMAs performance will remind you that she's a true feminist queen with class, and the internet rightfully adores this moment for her.

Elliott was honored with MTV's version of a Lifetime Achievement Award, recognizing her innovative music videos and cutting-edge contributions to the music world. Though Elliott is the first female rapper to receive the award, she joins a prestigious group of former recipients, including Beyoncé, Madonna, Janet Jackson, and, most recently, Jennifer Lopez. "Missy’s impact on the music landscape is indelible,” Viacom executive Bruce Gillmer said in a statement after she was announced as the recipient. "Her creative vision across production, performance, and songwriting is unmatched."

The last time Elliott performed live at the VMAs was in 2006, so this is a pretty big moment for her fans. Elliott performed a medley of her greatest hits, with some nods to her most famous videos included throughout. And maybe the best part? She brought Alyson Stoner onstage to dance with her! Before she became a star in her own right, Stoner was famous for being the little girl dancing in Elliott's videos.

For anyone who was an OG Missy fan, this was a heart-stopping moment. Celebrities like Taylor Swift and Gigi Hadid danced along in the audience, loving every second. And after that epic performance, Twitter users are definitely losing control.

Elliott is no stranger to making history — earlier this year, she became the first female rapper ever to be inducted into the Songwriters Hall of Fame. Even Michelle Obama is a fan! She spoke of her love for Elliott's music during a taped video that aired at the 2019 Songwriters Hall Of Fame Gala on June 13. “Missy, I want to thank you for all of your trailblazing ways,” Obama said. “Thank you not for just sharing your gift with the world, but for being an advocate for so many people out there, especially young girls who are still figuring out how to make their voices heard.”

Elliott's songs are not only catchy; they're also super inspiring. Who hasn't heard the lyrics to "Lose Control" and immediately felt like a million dollars? Her lyrics are also sex-positive (have you listened to "Toyz"?) and affirming for anyone who has ever questioned their worth.

"She's the voice we need," said Cardi B when presenting the trophy for the Vanguard Award. And Elliott was grateful and classy as ever when accepting her honor. I stan a feminist, boundaries-pushing queen! It's high time that Elliott receives this prestigious award, and that performance just proved that she's still making waves. Yes, girl, get ur freak on!