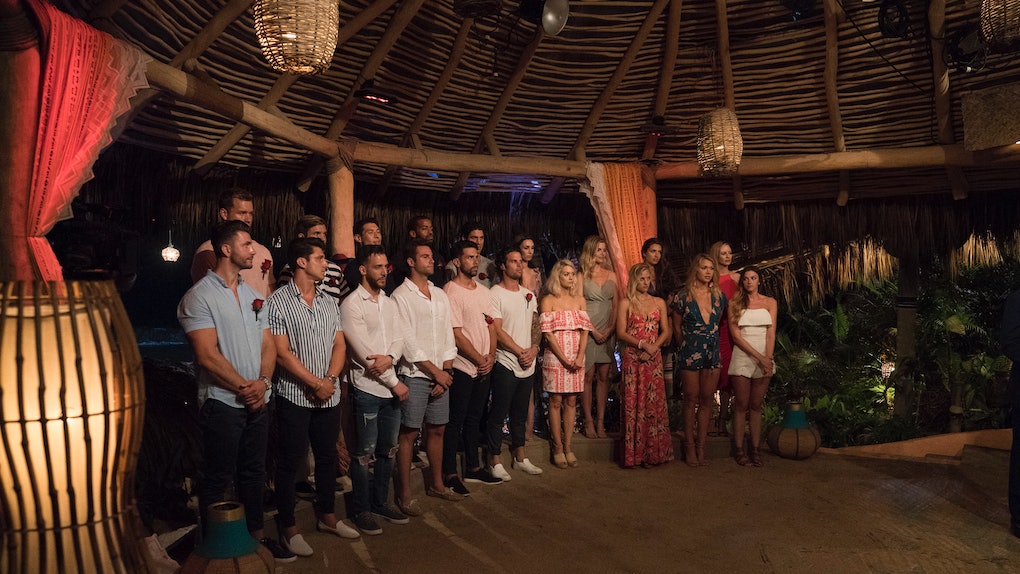 On Season 5 of Bachelor in Paradise, Joe Amabile and Kendall Long were the fan favorites who became even more lovable when they paired up early on in the season. Before Sept. 10's episode, I was ready to pitch my rom-com called The Taxidermist and The Grocer to studios, but in an upsetting turn of events, Kendall and Joe broke up before the penultimate rose ceremony. Bachelor Nation is reeling from their decision, but these tweets about Kendall and Joe's breakup on Bachelor in Paradise manage to perfectly capture fans' devastation.

Although Bachelor Season 22 alum (and guidance counselor, TBH) Kendall briefly toyed with dating John Graham and Leo Dottavio, the latter's explosive behavior toward her and the rest of the cast confirmed that Bachelorette Season 14's Grocery Store Joe was the guy for her. While Joe's fans dreamt about him defending them in bar fights, he took the next step in his relationship with Kendall when they ended up on a date babysitting the children of married Paradise couples Carly and Evan Bass and Jade and Tanner Tolbert. Cue the squeals!

In the words of Jordan Kimball, Kendall and Joe sitting together with babies on their laps stirred up visions of a cozy Christmas morning, and this was definitely a holiday party I wouldn't mind attending.

OK, so there were no Paradise babies for contestants to play with before this year, but ABC doesn't just wheel out babies on the beach for anybody. The couples trusting Kendall and Joe with their daughters was essentially the franchise's approval of them as a pair, and Neil Lane was probably in the wings perfecting his ring display as Joe tried to console a weeping Emmy Tolbert. However, following their baby bliss, Kendall and Joe hit a rough patch that no one was expecting.

In the latest episode, Joe explained that despite his own worries about commitment in a relationship, his love for Kendall changed his viewpoint. But in Joe's words, Kendall also happened to be "petrified of commitment." When Joe finally brought up the possibility of getting engaged, Kendall froze, even after telling him, "I think after we leave here, it's gonna be weird not seeing you every day."

Both Kendall and Joe have apparently steered their conversations away from serious topics, including what their future together looks like. Kendall then suggested that getting engaged was miles away from what they've discussed together, reminding Joe, "We always joke around...and avoid serious conversation at all costs."

Kendall left the conversation that night, sending Joe into a tailspin, but the upcoming rose ceremony only deepened their conflict. Joe was concerned about her sudden shift in attitude when Kendall admitted she felt that their talk about engagement felt forced and not as a result of wanting to be engaged. When Kendall said she wasn't sure how Joe felt about her, Joe pointed out that he's done nothing to make her think he wasn't committed to her, saying, "I haven't kissed or gone on a date with anyone else. And I got pulled for multiple dates and the first thing that comes out of my mouth is your name."

Clearly, the two were on different pages, which was Joe's biggest fear about this relationship. As they only wanted to be in Paradise with the other, their disagreement about engagement drove them to split up and leave the beach separately. As Joe left, Kendall sobbed, worrying that she didn't say enough and feeling blindsided about Joe sharing his truth.

In other words, this was some serious Nicholas Sparks-esque drama.

My visions of Kendall and Joe's babies running through his Chicago grocery store weren't the only dreams shattered upon the breakup. Viewers commiserated on Twitter about the two's goodbye and Kendall's inability to commit.

Love in Paradise has taken a hit, but it's safe to say that this messy breakup won't be as easy to get over as other contestants' splits this season were. Part 2 of the Bachelor in Paradise Season 5 finale begins on Tuesday, Sept. 11, at 8 p.m. ET on ABC.